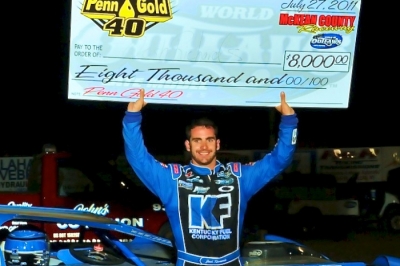 Racing in front of a standing-room-only crowd that ranked as the biggest in the history of the third-mile oval, Shinnston, W.Va.’s Richards overtook Vic Coffey of Caledonia, N.Y., for the lead on lap 27 and marched on to victory in the Penn Gold 40. | Slideshow | Video

The two-time defending WoO champion pocketed $8,875 for his fourth victory of 2011 on the national tour. It was his 32nd career World of Outlaws triumph, more than any other driver since 2004.

“It’s very special to win the first time here at McKean,” said Richards, a 23-year-old who had never previously competed at McKean County. “With so many people here, it was cool to come out with a win. It was awesome to see such a great crowd show up to see us.”

Series points leader Rick Eckert of York, Pa., finished second, about a half-straightaway behind Richards at the checkered flag. Eckert grabbed the runner-up spot from Coffey on a lap-29 restart but never made a serious bid for the lead, leaving him a bridesmaid for the second consecutive night after starting from the pole position.

Coffey, who turned 40 on Monday, raced off the outside pole to lead laps 1-26 but settled for a season-high finish of third. He fell short of finally breaking through for his first career WoO victory in what was his 100th career start with the series.

Richards, who started fourth, slid into second at the initial green flag and chased Coffey for more than half the distance before finally assuming command. Coffey slipped high in turn two on the 26th lap, allowing Richards to drive his father Mark’s Rocket Chassis house car underneath and move in front for good as lap 27 went on the scoreboard.

“Vic was doing a great job,” said Richards, who will make his third NASCAR Camping World Truck Series start for Kyle Busch Motorsports Friday night at Lucas Oil Raceway at Indianapolis. “The track was a little dirty and he got caught up in the dust (to lose traction) and that opened the door for me.

“When he slid up the track and I got by him, I hated that for him. I know Vic’s really hungry for a win and he’s gonna get one here before too long.

“But at the same time, we’re trying to win,” he added. “We’ve had a fast car all year. I feel like we could’ve won six or seven races this year, but we’ve just had some tough breaks. We haven’t stopped working hard, though, and it shows with a night like this.”

Eckert, 45, failed to convert a pole position start into a victory — or even a lap in the lead — for the second straight night. His Team Zero by Bloomquist mount was good but not quite good enough.

“Josh has been running good,” said Eckert, who left McKean County leading the points standings by 50 markers over Richards. “He’s been able to pass in the race. We’ve been good up till the race, then we just miss by a little bit. Hopefully we’ll figure out something here to finish the night off.”

Coffey was the evening’s heartbreak kid, absorbing another tough defeat on the WoO tour.

“We needed to tighten the car up a little bit more,” said Coffey. “I talked to Josh right before the race and he told me where he was at (with setup). We were pretty close, but he had done a couple adjustments I didn’t do. I was scared that I was already too tight, but then I talked to him and I was like, ‘Man, maybe we need to make some adjustments.’ Then (the WoO officials) blew the (eight-minute) horn and we just decided, ‘Let’s go with what we got.’

“We probably should’ve been a little tighter. We got a little loose at the end.”

Coffey might have been able to salvage a second-place finish had he not made a do-or-die choice following the race’s fourth and final caution flag, on lap 29.

“On that last restart I probably should’ve picked the bottom (lane in the ‘Delaware’ double-file alignment),” said Coffey. “But I honestly thought my only shot to get the lead back was if I took the top and Josh went to the bottom in turn one and I hit it right down there. I guess it was either gonna be first or third. I wasn’t real interested in second.”

Boom Briggs of Bear Lake, Pa., finished sixth, matching his career-best WoO finish and earning the $500 Bonus Bucks cash for being the highest-finishing driver who hasn’t won a series A-Main and isn’t ranked among the top 12 in the points standings.

Rounding out the top 10 was Tim McCreadie of Watertown, N.Y.; 12th-starter Clint Smith of Senoia, Ga.; Darrell Lanigan of Union, Ky., who restarted at the rear of the field on lap 11 after bringing out a caution flag when he clipped the homestretch and then slid to a stop between turns one and two while holding fourth place; and Robbie Blair of Titusville, Pa.

McCreadie’s seventh-place finish was a respectable ending to his very rough evening. His troubles began with a broken driveshaft in his Victory Circle car during hot laps, forcing him to hastily pull out his backup Rocket machine for time trials. He returned to the seat of his Victory Circle for heat action after making repairs and qualified, but he relinquished the 17th starting spot in the A-Main and took the green flag from the rear because he had to pit on the pace laps due to power-steering woes.

“I really feel like we had a top-five car,” said McCreadie, who came through the pack one night after an 18th-to-fourth charge at Dog Hollow. “We just had too many cars to pass again.”

The series completes its three-race swing through western Pennsylvania Sunday evening with a 50-lap, $10,000-to-win A-Main at Eriez Speedway in Hammett. It will mark the fifth consecutive year that the tour has visited the third-mile oval.