Bloomquist gets back on track, wins at Wheatland 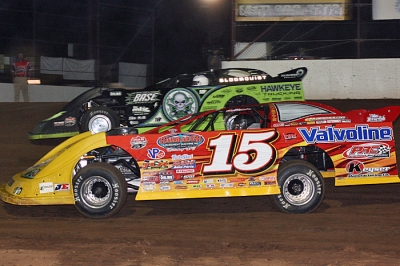 Bloomquist, the two-time and defending Lucas Oil Series champion, inherited the top spot when leader Steve Francis of Ashland, Ky., had a mechanical failure with six laps remaining in the 50-lapper and led the remaining distance on his way to earning $10,000 at the 3/8-mile racetrack for his ninth victory on the series this season.

John Blankenship of Williamson, W.Va., finished second, followed by Jimmy Owens of Newport, Tenn. Polesitter Tyler Reddick of Corning, Calif., and Bub McCool of Vicksburg, Miss., rounded out the top five finishers in an event that was sanctioned by both the Lucas Oil Series and the Lucas Oil MLRA Late Model Series.

"Sometimes you have to be lucky and we were tonight,” said Bloomquist, who had won three straight series events before finishing second to Brian Birkhofer of Muscatine, Iowa, Friday night at Tri-City Speedway in Granite City, Ill. “Francis went to the top before I could get there and he was strong tonight no doubt about it. It looked like we were going to finish second again here, but to come home with the win, it feels good. The car is running exceptionally well with Lucas Oil in the Roush-Yates Ford."

Bloomquist started alongside Reddick on the front row and settled into the second position as Reddick moved to the early lead. Reddick, a 15-year-old rookie on the Lucas Oil Series, led until Bloomquist took over the top spot with 18 laps scored. But his lead was short-lived as the third-starting Francis took his car to the high side of the track and swept by for the point on lap 21.

Francis pulled away from Bloomquist as he continued to power around the top side of the track. He pulled to nearly a 10-car-length advantage and appeared to be on his way to his first victory of the season until slowing on lap 45. Boomquist inherited the lead and pulled away from Blankenship and Owens in the closing laps to pick up the victory.

Notes: Bloomquist's self-designed chassis is powered by a Roush Yates Ford engine and sponsored by Miller Bros. Construction, Base Racing Fuels, Hoosier Tire, Lane Automotive and Sweet Mfg. ... With his victoy, Bloomquist extended his points lead to 60 markers over Owens. ... Blankenship matched his career best finish with his runner-up effort. ... The event was filmed for a tape-delay broadcast to air on SPEED network at a later date. ... The series will round out the month of July with an East Coast tripleheader, beginning July 27 at Fonda (N.Y.) Speedway. The series will also visit Utica-Rome Speedway in Vernon, N.Y., on July 28 and Hagerstown, (Md.) Speedway July 30. All three events are scheduled to pay $10,000 to the winner.