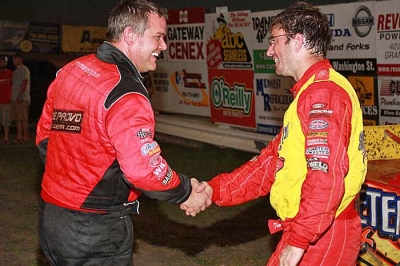 McCreadie, 37, of Watertown, N.Y., began running the extreme outside lane of the high-banked, quarter-mile oval midway through the race and proceeded to vault forward. He passed Jimmy Mars of Menomonie, Wis., for the lead on lap 31 and spent the remainder of the distance battling to stay out front in an event that saw four drivers in contention for the win on the final lap.

“This place is a bad-ass, racy little joint,” said McCreadie, who ended a 35-race winless streak since his last WoO victory on July 7, 2010, at Deer Creek Speedway in Spring Valley, Minn. “It’s long ways away from home, but it’s fun to come here. If you sleep for a lap or take it easy for a lap, the next thing you know you’re getting passed.

“Man, I’m whipped,” he added after earning $10,875 for triumphing on a hot and humid summer evening. “I can’t do this like I did when I was in my early 30s, that’s for sure. I just ran as hard as I could the whole time.”

McCreadie, who started ninth, crossed the finish line 0.649 of a second ahead of Mars to register his first victory behind the wheel of the Sweeteners Plus-sponsored Victory Circle car that he began campaigning in mid-May. It was his 17th career WoO victory.

Mars started from the pole and led laps 1-4 and 7-30 in his MB Customs machine, but he then slipped back to fourth. He rallied on the final lap to nip Austin Hubbard of Seaford, Del., for the runner-up spot by a mere 0.049 of a second.

McCreadie, who matched his season-best WoO finish of third in the Wild West Tour opener on July 13 at Deer Creek, credited his decision to utilize the outside groove for propelling him to victory.

“(Tim) Fuller showed me (the cushion) was there early and I found it before most of them could,” said McCreadie. “We just got lucky tonight that nobody was where I was at up on the cushion when I got to the lead.”

Maintaining the lead, however, was a difficult chore for McCreadie. With the race running caution-free from lap 26 to the finish, he spent the final circuits mired in heavy traffic with Hubbard, Lanigan and Mars all biting at his heels.

“Lapped traffic was tough,” said McCreadie, who nearly tangled with slower cars on several occasions. “I saw Jimmy (Mars) back beside with like three to go and I said, ‘Dammit, he’s gonna drive right on by me.’ But he’s a class act and left me enough room and we held on.

“It was just my night for a change,” he continued. “It’s been a pretty crappy year up until about a month ago, but we’ve turned it around. I told my guys the other day that if we could start somewhere up near the front, we’re gonna have a shot. We’re learning every time this Victory Circle car is on the track, and Bill (Schlieper) from Pro-Power (Engines) moved the power curve down on this thing a little and it’s been lights-out ever since.”

Mars, 39, attached his fate to the inside lane and fell short in the frenetic race.

“When I go to tracks with no guardrails (like River Cities), I tend to favor the bottom,” said Mars, who won the WoO-sanctioned Firecracker 100 June 25 at Lernerville Speedway in Sarver, Pa. “I’m just not real good on the top when there’s not a wall. I was good on the bottom and was just trying to keep up a pace that I was comfortable with, but then McCreadie passed me on the top so I had to step it up a little bit. When I did I ended up screwing up and getting passed, but we were able to get back to second.

“As close as it was at the end, one more lap I could’ve won or finished fourth,” he added. “It was getting crazy out there. If the crowd didn’t get their money’s worth tonight, I don’t know what else they would’ve wanted.”

Hubbard, who started fifth, was tired following the physically-demanding event but satisfied with his third-place finish. It was his first top-five finish since a fifth on April 30 at Bluegrass Speedway in Bardstown, Ky.

“That was definitely one of the best races we’ve put on this year and I’m just happy to have been a part of it,” said Hubbard, who matched his season-high finish of third in the ’11 WoO opener on Feb. 17 at Volusia Speedway Park in Barberville, Fla. “I probably could’ve moved up (to the top groove) earlier, but I started fifth and got to second on the bottom so I figured, ‘I’ll just ride down here.’

“It kind of seemed boring for the first 20 laps – I was thinking, Well, we’re gonna run second to Jimmy. Then all of a sudden it just turned up. Right when Pat (Doar) and Darrell split me right before that caution (on lap 26), I realized it’s about to get on.”

Lanigan, 41, largely used the inside groove and that left him in a bind when slower traffic entered the picture in the race’s closing stages.
“Lapped cars there at the end just kind of got us in trouble,” said Lanigan. “I was best in the bottom if I could just stay there, but them lapped cars made us get off the bottom. I tried to split those two cars on the last lap and it cost me second and maybe a chance to win.”

Five caution flags slowed the event, including two for Clint Smith of Senoia, Ga., who had a promising outing go awry when he was forced over the turn-three bank on lap six while battling for fifth place. He continued after making a pit stop, but front-end woes caused him to slow and bring out a second caution on lap 26.

Ron Davies of Warren, Pa., also took a heartbreaking trip over the turn-three bank, sliding off the track on lap six while leading the race. The 53-year-old WoO rookie, who passed Mars for the top spot on lap five, rallied to finish 12th.

Two-time defending series champion Josh Richards of Shinnston, W.Va., started fourth and battled Hubbard for second early in the distance, but a faulty distributor forced him to slow and bring out a caution flag on lap 19. He limped into the pit area and did not return, absorbing a rare DNF (21st place) that dropped him 58 points behind Eckert in the WoO standings.

“We had a fast race car,” said Richards, who now is just 50 points in front of third-place McCreadie in the standings. “I don’t know if we were good enough to win, but I really think we would’ve been all right. McCreadie was really good on top and I was up there early and felt pretty good.

“As soon as we pulled in I went up and watched the end of the race and it was awesome to watch. I just wish we could’ve been in it.”

Shane Clanton of Fayetteville, Ga., finished sixth, coming on late after starting 16th. Brady Smith of Solon Springs, Wis., who won the ’08 WoO event at River Cities, moved from the 15th starting spot to place seventh; McCreadie’s Sweeteners Plus teammate, Vic Coffey of Caledonia, N.Y., was eighth; Tim Fuller of Watertown, N.Y., finished ninth after running as high as fifth early; and Rookie of the Year points leader Pat Doar of New Richmond, Wis., rounded out the top 10 after climbing as high as third just before the race’s midway point.

Lanigan was quickest in the 28-car Ohlins Shocks Time Trials, clicking off a lap of 12.292 seconds. It was his series-leading fourth fast-time honor of the season. Heat winners were Lanigan, Mars and Clint Smith. Bill Koons of Omaha, Neb., captured the B-Main.

Jill George of Cedar Falls, Iowa, nearly made history in the B-Main, falling just two laps short of becoming the first female driver to win a WoO LMS qualifying event. She led the 12-lap race from the start until her bid ended with a slap of the turn-one wall with the two-to-go signal out. Her car was repaired in time for her to start the A-Main using a provisional and finish 17th.

The World of Outlaws Wild West Tour concludes July 19 with the third running of the Cowboy 50 at Gillette (Wyo.) Thunder Speedway. A $10,000 top prize will be awarded to the winner.