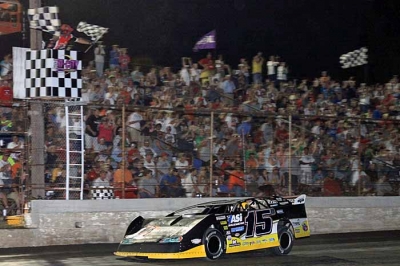 Brian Birkhofer picks up a $20,000 victory at Tri-City Speedway. (stlracingphotos.com)

With Bloomquist of Mooresburg, Tenn., riding a three-race win streak entering the event, Birkhofer of Muscatine, Iowa, prevented Bloomquist from extending his streak by outdueling the two-time series champion to pick up a $20,000 victory in the richest event ever held at the 3/8-mile racetrack near St. Louis. | Prelims | Video | Slideshow

Birkhofer, who ended a four-race win streak by Bloomquist with a victory earlier this year at 34 Raceway in West Burlington, Iowa, started second and took over the lead from polesitter Don O’Neal of Martinsville, Ind., on lap eight. He went on to lead the remainder of the 100-lapper and held off Bloomquist and Billy Moyer of Batesville, Ark., while racing through slower traffic in the closing laps to pick up the 13th Lucas Oil Series victory of his career.

"O'Neal started off real strong, we ran side-by-side there for a while, until I was finally able to clear him,” Birkhofer said of his early-race battle with O’Neal. “The traffic was difficult, especially there at the end when it got slick. My car wasn't getting through the turns like I wanted, but we had enough of a distance apparently there at the end to get the win."

Bloomquist settled for the runner-up finish, taking over the series points leader from Jimmy Owens of Newport, Tenn. The 10th-starting Moyer was one of the race’s biggest movers, climbing to third by the finish. Brian Shirley of Chatham, Ill., started sixth and ran as high as second before falling back to fourth. Owens was fifth while the pole-starting O’Neal slid back to sixth by the end of the race.

The victory avenges an earlier disappointment at Tri-City for the 39-year-old Birkhofer, who was set to start near the front of a $10,000 UMP DIRTcar Summernationals event in his most recent visit to Tri-City in June, before his left-front wheel fell off his race car prior to the start of the race.

"It's been a tough year in some aspects for us,” Birkhofer said. “We were here a few weeks ago and the wheel came off before the start of the race. We've tried to patch together a crew here lately, and I have Brian Daugherty of Integra Shocks here tonight helping. It feels good to win here at (promoter) Kevin's (Gundaker) track. To beat Scott and Billy, I mean what can you say about either of them that hasn't already been said, they are two great drivers."

Before one of the largest crowds in track history, O'Neal grabbed the lead at the start of the race and led the first seven circuits until Birkhofer took over the point. Bloomquist moved into the runner-up spot on lap 12 before the race’s only caution appeared for Dale McDowell of Rossville, Ga., on lap 15.

Birkhofer maintained his lead on the restart as Shirley used the high groove to move around Bloomquist for the second position. Birkhofer started to pick-up the tail of the field by lap 25, allowing both Shirley and Bloomquist to cut into his lead. Bloomquist maneuvered back around Shirley on lap 26 as the top three pulled away from the rest of the pack.

As the race wore on Birkhofer built a comfortable advantage over Bloomquist, who had finally shed of Shirley for good by lap 60. Bloomquist closed the gap with ten laps to go while Birkhofer dealt with heavy slower traffic. But Birkhofer was able to clear a couple of cars that were battling in front of him and distanced himself from Bloomquist as he went on to capture the victory.