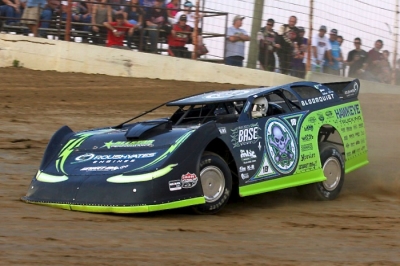 Scott Bloomquist tunes up at Portsmouth, where he earned $10,000. (rasmithphoto.com)

PORTSMOUTH, Ohio (July 2) — Shaking off a month of frustrating finishes and accidents, two-time series champion Scott Bloomquist of Mooresburg, Tenn., got back on track Saturday at Portsmouth Raceway Park. The Hall of Famer dominated every lap of the Independence 50 for his series-leading 32nd career Lucas Oil Late Model Dirt Series victory.

A late caution set up a four-lap dash to the finish with series points leader Jimmy Owens of Newport, Tenn., hot on his heels, but Bloomquist stayed in front of his fellow front-row starter for a victory in front of a record-setting crowd at the third-mile oval just north of the Ohio River.

"It sure feels good to get back to victory lane," said the 47-year-old polesitter, whose sixth victory of the season was his first since a four-in-a-row streak ended April 30. "We have torn up more stuff in the last month than I think I have in the last five years

"I saw Jimmy's number on the scoreboard running in second before that last restart, I knew I had a better car than him tonight. He's been pretty strong here lately, but our car was solid here tonight."

Bloomquist grabbed the lead from the drop of the green and built a sizable lead up until the first caution of the race on lap 10. On the restart, Bloomquist led Pearson and Owens as Pearson stayed close to Bloomquist for a couple of circuits until the leader pulled away.

Bloomquist was in control of the race until a caution with four laps to go allowed Owens and Pearson to take their last cracks at him. Owens had regained the second spot from Pearson a lap before the caution flag, but he couldn't overtake Bloomquist in the race's final moments.