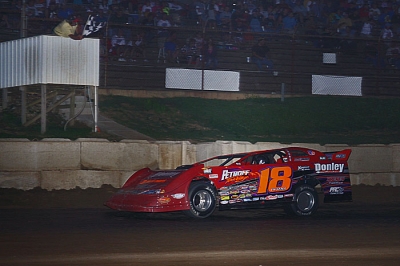 Babb, the 2005 and 2006 Summernationals champion who took over the series points lead with his victory Sunday at I-96 Speedway in Lake Odessa, Mich., moved by race-long leader Ryan Unzicker of El Paso, Ill., in traffic on lap 14 of Monday’s main event and led the remainder of the 40-lap race for a $5,000 payday.

After starting fourth, Babb trailed the second-starting Unzicker for the first 10 laps of the race and closed the gap when Unzicker struggled to put Greg Kendall of Paloi, Ind., down a lap. Babb went three-wide with Unzicker and Kendall exiting turn four on lap 13 before contact between the three drivers nearly sent Babb into the infield of the quarter-mile racetrack. But he maintained control of his race car and completed the winning pass in turns one and two.

“He was a little quicker than me down the straightaways, but we got to traffic and I knew I could probably get him because my car was really good through the corners,” Babb said of his battle with Unzicker. “I went low under him and I looked over and we kept getting tighter and tighter. The next thing I know I’m almost in the infield. That’s just short track racing. It got tight, but we made it through it.”

Babb pulled away from Unzicker during the middle portions of the caution-free race, but his own struggle with traffic allowed Unzicker to make a late charge. Unzicker pulled to within a few car lengths of Babb with two laps remaining, but mechanical problems slowed Unzicker on the final lap and Babb pulled way to the victory.

“I knew somebody was there chasing me down, but I didn’t wanna slide the lapped car because I wasn’t sure it was gonna stick. I made a mistake there and he capitalized on it,” a disappointed Unzicker said. “The car was excellent all night long. It’s unfortunate we brought home third because we had the car to beat tonight.”

Feger started from the pole, but never challenged for the lead after allowing Unzicker and Babb to move by him on the opening lap. He appeared to be headed to a third-place finish until Unzicker’s mechanical issues allowed him to move up a position.

“You start on the pole and you expect to win, but (Unzicker and Babb) rolled by me on the outside while I tried the bottom those first couple laps,” said Feger, the defending series champion who’s currently third in the series standings. “But to come out of here with a second works out pretty good I guess. We’ve still got a lot of races left. Shannon’s been running awfully strong and it’ll probably be hard to catch him, but you never know what can happen on this deal.”

Notes: Babb’s Victory Circle by Moyer Race Car is sponsored by Petroff Towing, Donley Trucking, Allstar Performance and Performance Rod & Custom. ... Defending race winner Don O’Neal of Martinsville, Ind., flipped his MasterSbilt Race Cars house car on his second lap of qualifying. He was uninjured, but called it a night after the incident. ... The series returns to action with round eight Wednesday night at Belle-Clair Speedway in Belleville, Ill. The event pays $5,000 to the winner.

Ryan Unzicker led every lap of the caution-free third heat race for a convincing victory while Scott James moved by Brian Shirley on the final lap to finish second. Shirley settled for third with Jon Dome fourth. Kent Robinson was the only other car to start the race, but he fell out around halfway. Don O'Neal was scheduled to start from the pole, but didn't make the call after rolling his race car on his second qualifying lap.

Polesitter Frank Heckenast Jr. won the second heat race after retaking the lead from Brandon Sheppard on the final lap of the 10-lap prelim. Sheppard grabbed the point on the start of the race and held off Heckenast for nine laps before letting him slip by on the high side on final trip down the back straightaway. He settled for second with Bobby Pierce a close third. Billy Moyer Jr. finished fourth with Dillan White fifth.

Defending series champion Jason Feger moved to the lead over polesitter Shannon Babb on the start of the first heat race and led every lap for the victory. Feger pulled to nearly a straightaway advantage in before the race's only caution on lap nine set up a one-lap dash to the finish. But the second-running Babb didn't have anything for Feger and settled for the runner-up finish. Dennis Erb Jr. finished third with Jack Sullivan fourth and Donny Walden fifth in the race that transferred all cars to the main event.

Points leader Shannon Babb of Moweaqua, Ill., was fastest among 22 qualifiers Monday at Lincoln Park Speedway during time trials for the seventh round of the UMP DIRTcar Summernationals. Babb turned a lap of 13.187 seconds to earn the pole position for the first of three heat races coming up.

With his victory in the most recent series event Sunday at I-96 Speedway in Lake Odessa, Mich., Shannon Babb of Moweaqua, Ill., overtook Scott James of Lawrenceburg, Ind., for the lead in the points standings on the 25-race tour. With 387 points Babb, the 2005 and ’06 series champion, leads James (365), defending series champion Jason Feger of Bloomington, Ill., (327), Ryan Unzicker of El Paso, Ill., (298) and Brian Shirley of Chatham, Ill., (292). ... Scott James led the series standings prior to the event at I-96, but a seventh-place effort there Sunday let Babb slip by. While it wasn’t what he was hoping for, it was actually a good finish considering what he went through at the event. He went off the banking of the race track in his heat race, and later found an oil leak on his race car, forcing him into his backup car for the main event. He’s still in the backup car for tonight’s race, but he's confident it will perform well as he looks to bounce back at Lincoln Park. “It’s a really good car that we ran well with earlier this year,” James said of his Rocket Chassis. “There’s still a long way to go on the tour, but it’d be good to get a good run and try to gain some ground back tonight.” ... After struggling early on the tour, Jack Sullivan of Greenbrier, Ark., scored his best finish on the tour this season with a fifth-place effort at I-96. Sullivan and his GRT Race Cars house car crew found something amiss with the braking system on his race car prior to the I-96 event. He hopes correcting that problem will help him get some more strong runs. “It’s been a tough deal so far, but hopefully that and some other things we’ve found will help out,” Sullivan said. ... Defending race winner Don O’Neal of Martinsville, Ind., is making his first appearance on this year’s tour at Lincoln Park. O’Neal, the 2004 series champion scored the biggest victory of his career earlier this month in Eldora Speedway’s Dream XVII. ... Greg Johnson of Bedford, Ind., is debuting a new Rayburn Race Car tonight. ... Tonight’s race is just the second Late Model event at Lincoln Park since a 2003 Northern Allstars Late Model Series race won by John Gill. The quarter-mile oval is a stronghold for sprint car racing. ... Marty O’Neal of Spencer, Ind., blew an engine prior to hot laps and will not compete tonight.