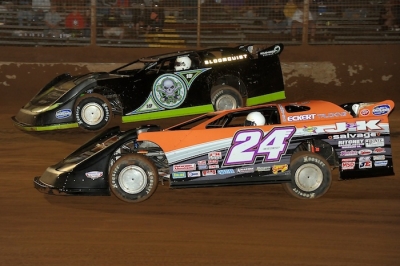 Driving a self-built car that was in a rollover accident one earlier, the legendary star from Mooresburg, Tenn., tuned up Friday for his run at a second career win in the World of Outlaws Late Model Series event by capturing the weekend’s second 30-lap semifeature. | Video | Slideshow | Richards wins Thursday's Firecracker semifeature

Bloomquist, 47, overtook Clint Smith of Senoia, Ga., for the lead on lap 14 and repelled the challenges of York, Pa.’s Rick Eckert throughout the race’s second half to pocket a top prize of $6,125. It was his third win in six WoO starts this season and his 22nd triumph since 2004 on the national tour.

With the victory, Bloomquist assured himself a pole starting spot in a heat race for the $30,000-to-win Firecracker 100, which is scheduled for Saturday at the 4/10-mile western Pennsylvania oval. He won the inaugural event in 2007 and feels confident about his chances of becoming its first repeat winner.

“We like the way the racetrack gets when you race longer shows — this track especially,” Bloomquist said of Lernerville. “It gets pretty tricky (in the Firecracker 100). It gets really slippery, so you gotta have your car on the money — and I feel like I got a good, balanced car for the race (Saturday). We should be pretty good.”

Eckert, 46, settled for his second runner-up finish in as many nights, crossing the finish line 0.716 of a second behind Bloomquist, who built Eckert’s car. The WoO points leader will also start a heat race from the pole position on Saturday night.

Smith, 46, slipped to third at the finish after charging off the outside pole to lead laps 1-13 in his Rocket mount. Jonathan Davenport of Blairsville, Ga., advanced from the ninth starting spot to place fourth in the Barry Wright house car and sixth-starter Josh Richards of Shinnston, W.Va., who won Thursday semifeature, was fifth in his father Mark’s Rocket Chassis house car.

Bloomquist, who finished fourth in Thursday night’s feature, started inside of Eckert in the second row and was outgunned by Eckert at the initial green flag. But Bloomquist gathered himself and marched steadily forward, regaining third from Eckert on lap four, passing Austin Hubbard of Seaford, Del., for second on lap 11 and then gliding by Smith for the lead with an inside move on lap 14.

Eckert, who followed Bloomquist past Smith, kept Bloomquist from cruising to the checkered flag. But while Eckert managed to draw close to Bloomquist, he couldn’t summon enough speed to make a pass.

“I think we were about dead even,” said Eckert, who ended the night leading Richards by 14 points in the series standings. “Scott just beat me to the front. I got ahead of him at the start, but I pinched myself off over there racing Hubbard and Scott snuck back by.

“I about got to his door a couple times there. I actually about hit him in the door one lap (15) when I hit that slime (on the inside of turn four) and slid across the track. Luckily he heard me. I could hear him mat up and get out of there so we wouldn’t hit.”

“He told me that he hit that greasy spot there and thought he was gonna hit me in the door,” said Bloomquist, who has five top-10 finishes in his six WoO LMS starts this season and has earned $42,700. “I looked and I saw him, so I gassed up to cross him to get my door farther away from him so we finished without a scratch.”

Smith, meanwhile, was energized by his second top-five finish of the 2011 WoO campaign but would have preferred to stay ahead of Bloomquist.

“We were rolling around there on the top and it felt good,” said Smith, who snapped a 122-race winless streak on the WoO LMS with a victory last month at Needmore Speedway in Norman Park, Ga. “I could look back and see Scott getting in (turn) one — he was up there where I was at and I had a good distance on him. Then I kind of caught the lapped traffic and I had to check up a little bit, and that let Scott close the gap on me in one lap.

“My crew guy said (Bloomquist) found that bottom (lane) in one corner there and that’s when he drove up even with me. There’s a real fine line on that top (of the racetrack) where you had to hit it, and I just didn’t and Scott and Eckert both got by me.”

The 19-year-old Hubbard started from the pole position but finished 18th. He was battling for fourth on lap 21 when his car’s steering locked up, causing him to slide over the track’s berm in turn three and bring out the race’s only caution flag.

The race’s only serious incident occurred on the opening circuit when a tangle at the back of the pack caused Brady Smith of Solon Springs, Wis., to roll his car onto its roof exiting turn four. He escaped the incident uninjured, but he was eliminated along with Matt Lux of Franklin, Pa., and Vic Coffey of Caledonia, N.Y.

Sixty cars were signed in for the evening’s action, which was plagued by rain. Showers first struck during the afternoon and returned just as hot laps were scheduled to begin on schedule, delaying the start of time trials to nearly 10:15 p.m. The program was then spun off in rapid-fire fashion, ending at exactly 1 a.m.

The Firecracker 100 concludes on Saturday with a full day of activities. Following an afternoon of pre-race entertainment that includes a driver-fan horseshoes tournament at noon, the Miss Firecracker pageant at 2 p.m. and a driver autograph session at 4 p.m., six heat races — lined up using entrants’ best finish from the two preliminary programs — are scheduled to begin at 7:30 p.m.