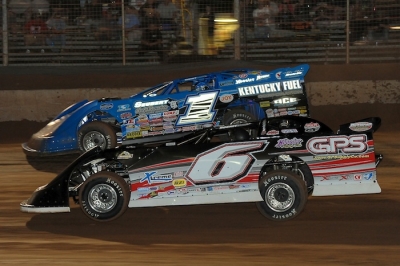 Josh Richards (1) takes the lead from Steve Shaver (6) on the fifth lap. (stivasonphotos.com)

Back in his father Mark’s familiar Rocket Chassis house car No. 1 after scoring his first WoO LMS win of 2011 behind the wheel of the Ernie Davis-owned No. 25 on June 18 at Winchester (Va.) Speedway, the 23-year-old star from Shinnston, W.Va., passed Steve Shaver of Vienna, W.Va., for the lead on lap five and never looked back. He pocketed a $6,000 top prize and assured himself a pole starting spot in a heat race for Saturday night’s $30,000-to-win Firecracker 100.

“We’ve been real fast all year,” said Richards, who has three career WoO triumphs at the 4/10-mile Lernerville oval. “We finally had things go our way the last couple weeks and hopefully we can keep it up and win more races.

“It would mean more than anything to me to win (the Firecracker) on Saturday,” he added. “We finally got our first 100-lapper (win) last year (at New York’s Mohawk International Raceway), but we’ve never won a crown jewel event — and I consider this a crown jewel event. This track is way better than a lot of tracks we get to go to for big races. This is an awesome place.”

Richards, who won from the pole position starting spot for the second consecutive series event, beat second-starter Rick Eckert of York, Pa., to the finish line by 0.723 of a second. It was Richards’s 30th career series victory since 2004 — more than any other driver on the tour over that span — and pulled him within eight points of Eckert in the battle for the series points lead through 12 events.

Shaver, who started third but surged into the lead on the race’s opening circuit, settled for a third-place finish in the K&L Rumley Rocket car. Scott Bloomquist of Mooresburg, Tenn., advanced from the seventh starting spot to place fourth in his self-built car, grabbing the position on a lap-26 restart from Jimmy Mars of Menomonie, Wis., who completed the top five in his MB Customs mount.

Richards actually got off to a slow start, slipping in turn two moments after the initial green flag and bumping together with Eckert on the backstretch as Shaver snatched the lead. But he quickly gathered himself and charged by Shaver with a powerful outside move off turn four heading to the line on lap five.

“I was a little bit harder on the right-front tire and I pushed across the track the first lap,” said Richards. “(Then) I went straight to the (outside) lip and tried to hammer on it. I got some momentum built up and I just slid by (Shaver).”

Richards made what was ultimately the race’s deciding move before Shaver could even realize what hit him.

“I talked to (Shaver) a minute ago and he said, ‘You must have mufflers on that car,’” Richards quipped during a postrace press conference.

“When I got the lead on the bottom that kind of screwed my whole plan up,” said the 46-year-old Shaver, who won the WoO LMS Commonwealth 100 on April 17 at Virginia Motor Speedway. “I thought, Well, I feel so good here, I’ll ride it out for a couple laps. Then all of a sudden I heard Josh ambush me on the outside there. He did a good job keeping it quiet until he was right up beside me.

“I’m not too sure we could’ve stayed up ahead of him anyway. My car started to fade there at the end.”

Eckert, 45, took up the chase of Richards after finally securing second place from Shaver on lap 22 but wasn’t able to offer a serious challenge. He was certainly satisfied with a $3,000 runner-up finish after surviving a hairy opening-lap racing incident with Richards that bent the steering on his brand-new Bloomquist Race Car.

“Down the backstraightaway on the first lap Josh got loose off two and went down, and then Shaver got under him,” said Eckert. “I went to go around them both (on the outside), and then at the last minute Josh darted out there and we hit pretty hard. My steering wheel was like 45-degrees to the left after that, so it took me about 10 laps to figure out how to drive it like that.

“During that long green I actually got better and better, but I was a long way from passing (Richards). I dove at him hoping he’d make a mistake on exit, but I knew when the caution came out with four to go that he was really gonna have to make a mistake to lose.”

Brady Smith of Solon Springs, Wis., finished sixth, picking up two positions after the race’s final restart on lap 26. Vic Coffey of Caledonia, N.Y., advanced from the 11th starting spot to place seventh, followed by 15th-starter Clint Smith of Senoia, Ga., seventh-starter Tim McCreadie of Watertown, N.Y., and 21st-starter Jonathan Davenport of Blairsville, Ga., who was relegated to the B-Main after spinning out of a transfer spot early in his heat race.

Three caution flags slowed the A-Main. WoO LMS rookie Pat Doar of New Richmond, Wis., slowed on lap one after scraping the homestretch wall; teenager Tyler Reddick of Corning, Calif., fell off the pace on lap six; and Austin Hubbard of Seaford, Del., who nearly rolled his car early in the event when he rode the homestretch wall, slid off the track in turn one on lap 26.

Darrell Lanigan of Union, Ky., who entered the event with four wins and eight top-three finishes in his 10 WoO starts this season, wasn't a factor. He started 12th but pitted during the lap-six caution period to bolt on softer tires and only managed to climb back to 16th at the finish.

Eckert made history on two counts in time trials. His blistering lap of 15 seconds flat lowered the track record and was his 25th career fast-time honor, more than any other driver on the tour since 2004. He had been tied atop the career fast-timer list with Richards.

The Firecracker 100 presented by GottaRace.com continues on Friday with another WoO semifeature program paying $6,000 to win. Drivers will use their best finish from the Thursday and Friday competition to align themselves in Saturday night’s Firecracker 100 heat races.