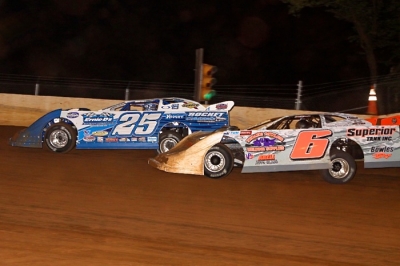 WINCHESTER, Va. (June 18) — It wasn’t easy. It wasn’t without a controversial moment. It didn’t even come behind the wheel of his signature ride.

But regardless of the path Josh Richards took to victory in Saturday night’s World of Outlaws Late Model Series Gunter’s Honey Spring 50 at Winchester Speedway, he was concerned with only two things following the checkered flag: finally capturing his first victory of 2011 on the national tour and becoming the circuit’s winningest driver since 2004 in the process. | Slideshow | Video

Parking his father Mark’s familiar Rocket house car No. 1 in favor of driving the Ernie Davis-owned Rocket No. 25 he campaigns in most non-WoO events, Richards, 23, of Shinnston, W.Va., overtook Vic Coffey of Caledonia, N.Y., for the lead on lap seven and survived a furious late-race challenge from Jamie Lathroum of Mechanicsville, Md., to snap his win drought. It was his 29th career World of Outlaws triumph, breaking his tie with Steve Francis of Ashland, Ky., atop the tour’s win list.

Richards’s victory also continued his torrid string of performances in Davis’s Roush-Yates Ford-powered machine over the last two years at the one-third-mile oval. He’s now won eight times in his last 10 starts at Winchester, including three wins this season.

“It was a little big of a rough race, but I was trying all I could out there,” said Richards, who earned $10,875 for his first WoO victory since Oct. 13, 2010, at the Dirt Track at Charlotte in Concord, N.C. “I was real hungry for a win and (falling short) wasn’t gonna be from a lack of effort.

“I’m real excited to finally get a win this year and break that tie with Francis (on the career list). It still feels unreal to be the all-time winner now.”

D.J. Myers of Greencastle, Pa., scored a WoO career-best finish of second, crossing the finish line 1.674 seconds behind Richards. The driver of Winchester Speedway promoter Greg Gunter’s car inherited second place on lap 42 when Lathroum executed a 360-degree spin in turn two while bidding to pass Richards, but, with Lathroum continuing without bringing out a caution flag, Myers didn’t have quite enough time left to make a bid for the win.

Darrell Lanigan of Union, Ky., ran second throughout the race’s middle stages but settled for a third-place finish — his eighth top-three outing in 10 WoO starts this season. Jeremy Miller of Gettysburg, Pa., came on strong during the second half of the event to place fourth and Lathroum completed the top five after his spectacular save.

Lathroum’s failed attempt to steal the top spot from Richards was the pivotal — and undoubtedly most debated — moment of the race. Lathroum had made a memorable charge forward from the 10th starting spot, cracking the top five by lap eight and reaching second when he passed Lanigan on the restart following the only caution flag on lap 27 for the Tommy Armel of Winchester, Va.

Richards maintained a six- to seven-car length edge over Lathroum for roughly 10 circuits before the gap suddenly disappeared. Lathroum began to challenge Richards on lap 39 and two circuits later dived to the inside of the leader rounding turns three and four and surged ahead. Richards managed to cross underneath Lathroum off turn four, however, and remained in front by a nose as lap 42 was scored.

The battle came to a head seconds later. When Richards slid up the track in track in turn two, Lathroum ran out of real estate on the outside and went spinning to the inside of the track. Lathroum managed to twirl completely around and get back up to speed without causing a caution flag, but he fell to fifth and never threatened again.

Richards, who started from the pole position but was outgunned for the lead at the initial green flag by Coffey, deemed Lathroum’s heartbreaking fate to be a product of hard racing.

“I saw my crew guys (motioning from the infield) — I knew someone was coming,” said Richards, whose team replaced his car’s seized rear end following time trials. “I thought it was Lanigan, (but) it was Lathroum. He came up through there and raced hard.

“I just tried to slide up past him (in turn two on lap 42). I really thought I had him cleared, but I got into him. I just gotta apologize for that a little bit.

“I was just trying to keep the lead,” he added. “I felt like we were a little bit too soft on tires, so I was just doing all I could to hold on at the end. That was definitely the hardest (race) I’ve ever won here.”

Lathroum, who won his lone WoO feature in 2009 at Delaware International Speedway, felt that the race slipped through his fingers.

“I was way better than (Richards) at the end,” Lathroum said. “I should’ve just let him go and passed him later because I felt we were good enough, but I thought I did a good slide job down there (turns three and four) and had him. But then he came back by me down here (turns one and two) and his right-rear just drove over the top of my nose and spun me out.

“When I seen it was clear (as he spun), I gassed it up and around it went and kept going ahead, but there went our chance. We don’t run these (WoO) races but four or five times a year, so when you have a chance to win one, it’s a big deal to us.”

Richards wasn’t threatened over the final laps as he secured Davis’s first-ever WoO victory. The race also marked the first time in Richards’s career that he entered a WoO event in a car not fielded by his father.

The most emotional driver following the A-Main was Myers, who fought back tears after the race when he spoke about his runner-up finish with WoO announcer Rick Eshelman. He earned a $500 bonus for being the highest finishers who hasn’t won a series race and wasn’t ranked among the top 12 in the points standings.

“I’m gonna have a hard time talking to you,” Myers told Eshelman, his voice cracking. “Last night my grandfather had open-heart surgery. He’s doing OK, but I wanted to win so bad for him. We run the wheels off that thing, but we just come up a little short. We’ll get ‘em next time. I’m gonna win one of these (World of Outlaws) races.”

Coffey, who started second, faded to a sixth-place after leading laps 1-6, while his teammate, Tim McCreadie of Watertown, N.Y., started and finished seventh. Rick Eckert of York, Pa., maintained his WoO LMS points lead with a solid eighth-place finish after starting 18th; Shane Clanton of Fayetteville, Ga., placed ninth; and third-starter Austin Hubbard of Seaford, Del., rounded out the top 10 after he fell out of the top five during the race’s second half thanks to a tire-compound choice that was too soft.

Light precipitation fell throughout the evening, but track and tour officials pushed the program along with the checkers falling shortly before 9:30 p.m.