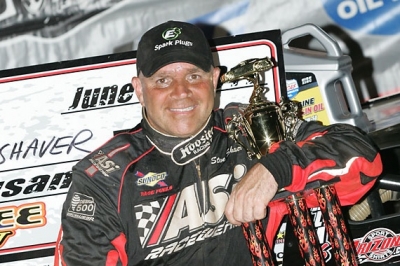 Shaver was one of few drivers not to suffer a flat tire on an abrasive racing surface around the 4/10-mile racetrack that sent plenty of drivers to the pit area for fresh rubber. Behind Cook, points leader Jimmy Owens of Newport, Tenn., finished third with 23rd-starting Don O’Neal of Martinsville, Ind., and Steve Casebolt of Richmond, Ind., rounding out the top five finishers.

"There's probably not any tread left on either rear tire,” Shaver said of his used up rubber. “I tried to baby them there at the end, but to hold Ray off, he's a clean racer and a great driver and to win this race means a lot to me and my race team.”

Polesitter Chris Ferguson of Mount Holley, N.C., led the first six laps of the race until being overtaken by the third-starting Davenport.

Davenport led the middle portions of the race before being challenged by Shaver for several laps before a lap-43 caution. During the caution, Davenport's right rear tire went flat, forcing him to give up the top position. Davenport’s demise handed the lead to Shaver, who held off Cook in the final run to the finish.

Notes: Shaver's K&L Rumley Motorsports Rocket Chassis is sponsored by GPS Supply Company, CV Products, Sunoco Race Fuels and Hoosier Racing Tires. ... Owens extended his lead of Scott Bloomquist in the Lucas Oil standings to 120 points with his third place finish. ... Bloomquist had a forgettable night, going upside-down in a mid-race accident while battling with Jared Landers of Batesville, Ark., in the top five. He continued on after the incident and finished 14th. ... Saturday's Lucas Oil event at Wythe Raceway in Rural Retreat, Va., was rained out; no makeup date was originally announced.