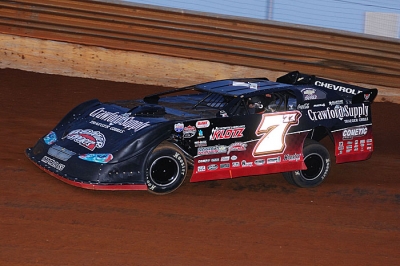 The pole-starting Landers of Batesville, Ark., grabbed the lead on the start of the race and held off Jonathan Davenport of Blairsville, Ga., in a close battle to earn the victory. | Video | Slideshow

"I don't know what to say, except that the car was strong all night long,” said the 30-year-old Landers, whose previous Late Model victory came in the 2010 Comp Cams Topless 100 at his hometown track of Batesville Motor Speedway. “Thanks to my crew they did a great job. Tommy Grecco is now my new crew chief, and to win here at Tazewell is just unbelievable,"

The first attempted start of the race resulted in a massive pileup before the first lap was completed, resulting in a red flag. Among those included in the wreck were Davenport, Ray Cook of Brasstown, N.C., points leader Scott Bloomquist of Mooresburg, Tenn., Jimmy Owens of Newport, Tenn., and Steve Casebolt of Richmond, Ind.

Landers jumped out to the lead once the race resumed as Davenport and Mike Marlar of Winfield, Tenn., gave chase. While they raced close, the top drivers stayed in order during the early portions of the race.

Landers maintained his lead as Davenport, Marlar and fourth-running Steve Francis of Ashland, Ky., all closed on him. Francis dove to the inside of Marlar near the halfway point of the race in a battle for third, but got caught behind Billy Ogle Jr. of Knoxville, Tenn., who was exiting the track, causing Francis to loose several spots.

With 25 laps to go Landers was still out in front with Davenport and Marlar putting the heat on him, while Owens had climbed back inside the top five after being involved in the first-lap maylay.

Marlar, who fell out of Friday night’s Lucas Oil Series race at Cleveland (Tenn.) Speedway while running third, saw another potential top-five run go to waste when his engine let go six laps from the finish. He slowed on the front stretch, bringing out the final caution of the race and setting up a late-race shootout between Landers, Davenport and Owens.

Landers managed to withstand several challenges from both Davenport and Owens in the closing laps, and beat the duo to the line for his first victory of the year. Davenport held off Owens for the runner-up finish, while Francis recovered to finish fourth and 23rd-starting Don O’Neal of Martinsville, Ind., finished fifth.

Notes: Landers’s Rocket Chassis is powered by an ECR Racing Engine with sponsorship from Crawford Supply, Klotz Synthetic Lubricants, Mark Martin Chevrolet, and Clint Bowyer Racing. ... Owens had won the two previous Lucas Oil Series events coming into Friday’s race. His victories came Thursday night in the $10,000-to-win event at Cleveland and the $30,000-to-win Show-Me 100 the previous week at Lucas Oil Speedway in Wheatland, Mo. ... The tour wraps up a tripleheader weekend with a visit to Florence Speedway in Union Ky., Saturday night for the 25th annual Ralph Latham Memorial. ... Bloomquist still holds the series points lead despite finishing three laps down with severe damage to his car. Owens is now just 15 points behind in second.