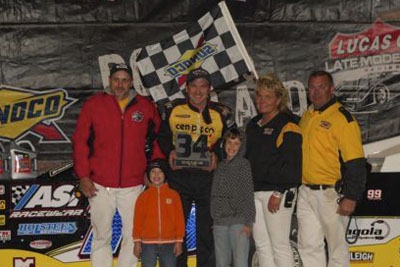 WEST BURLINGTON, Iowa (May 13) — Iowa native Scott Bloomquist came to 34 Raceway gunning for a record-setting winning streak. But another Iowan had something to say about it.

"Man, to win this race in front of my home-state crowd is just awesome. I know they had to be cold up there," the 39-year-old Birkhofer said after a night when rain threatened the action. "And to win for (late track owner and former sponsor) Johnny Johnson, he put so much into this place, it's a great facility. I just can't say enough for what that man did for me and the sport of Late Model racing."

Bloomquist overcame a poor start to finish second, but he said he was "mad at myself" for problems that hampered the left-rear suspension of his race car."

"It just upsets me," Bloomquist said. "We were really looking forward to hitting five in a row here — it's never been done. We had the car to do it. It was so good earlier it just bothers me when stuff like this happens."

Polesitter Steve Francis of Ashland, Ky., debuting a new MasterSbilt Race Car that was completed just a day earlier, led 19 of the first 21 laps and finished third followed by Jimmy Owens of Newport, Tenn., and John Blankenship of Williamson, W.Va. Brad Neat of Dunnville, Ky., led the first lap but faded to an eighth-place finish.

Neat outgunned fellow front-row starter Francis at the outset, but Francis went ahead for four laps before Birkhofer eased into the lead. But Francis blew back past Birkhofer to lead the seventh lap before the first of two cautions appeared for Billy Moyer's turn-two spin.

After the restart, Francis edged away for a comfortable advantage on Birkhofer after 15 laps, but the Iowan cut into that margin, using the middle groove to work around the low-running Francis and take command for good on lap 22.

"I love to run that momentum line, and I found it," Birkhofer said. "And (I) was able to get beside him and kind of dictate him where he couldn't run into the corners as hard as he wanted to."

After Tyler Reddick slowed on lap 23 to draw a yellow flag, Birkhofer stretched out to a straightaway lead past the halfway point and entered lapped traffic. Bloomquist, meanwhile, went around Francis on lap 34 to grab second. He made up ground on Birkhofer but never got within striking distance.

"It was fun to win again. It's been a while," said Birkhofer, who notched his 12th career Lucas Oil Series victory. "I guess we ended the year strong last year, but there's a lot of big racing coming up. All I ask for is top-threes, top-fives every night. You love to win, but to race for a living the way I do it, I just like to consistently get a good paycheckï¿½ — and winning is the biggest one to get."