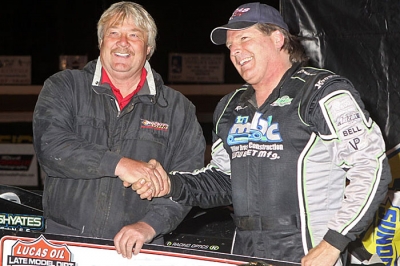 The second-starting Bloomquist took the lead on lap four from Chris Wall of Springfield, La., and went unchallenged for his fourth consecutive series victory, backing up his $10,000 triumph Friday night at Bedford (Pa.) Speedway.

"The car was just right all night long, we are just on a roll here since Florida,” said Bloomquist, who has won every Lucas Oil event since the series left Eastbay Raceway Park in Gibsonton, Fla in February. “Usually we get on a late season win streak, but here early on, everything is just clicking. The series is tougher than ever before, and to beat these guys it takes a lot of hard work.”

Wall led the first three laps after beating Bloomquist into turn one on the start of the race. But he drifted up the track on lap four, allowing Bloomquist to slip by him for the lead.

A string of cautions from lap nine through 13 kept the field bunched up, but Bloomquist quickly extended his lead after each restart.

Steve Francis of Ashland, Ky., moved past Wall on lap ten to take over second, but Wall regained the spot two laps later. Francis was undeterred and the veteran driver again raced around Wall on lap 14.

The top five remained the same for the next ten circuits as Bloomquist opened an eight-car-length lead over Francis by the halfway mark.

Bloomquist cruised to the victory in the second half of the race, while Pearson earned the runner-up finish after Francis ran into trouble late and ended up 12th. Don O’Neal of Martinsville, Ind., finished third with Jimmy Owens of Newport, Tenn., and Jared Hawkins of Fairmount, W.Va., rounding out the top five finishers.

Notes: Bloomquist's self-designed race car is powered by a Roush-Yates engine with sponsorship from Miller Bros. Coal, Base Fuel, Hawkeye Trucking and Allstar Performance. ... The event was the first visit by the Lucas Oil Series to Roaring Knob. ... The victory is Bloomquist’s 31st on the Lucas Oil Series. ... Dan Stone of Thompson, Pa., set a new track record with his qualifying lap of 15.212 seconds. ... The next Lucas Oil Late Model Dirt Series event is scheduled for May 7 at Paducah (Ky.) International Raceway with $10,000 going to the winner.