Bloomquist makes it three in a row at Bedford 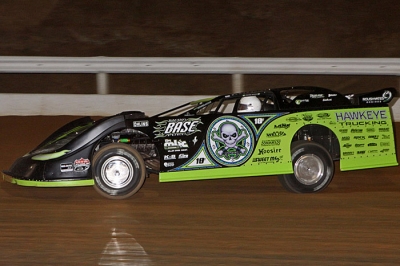 The pole-starting Bloomquist led wire-to-wire in the 50-lap event, lapping up to the ninth-place finisher on his way to earning a $10,000 payday.

"The car was good from the time we unloaded it tonight,” said Bloomquist, whose two previous Lucas Oil victories were the Indiana Icebreaker at Brownstown (Ind.) Speedway April 9 and a $20,000-to-win event at Lone Star Speedway in Kilgore, Texas April 2. “In the heat race it was good, and in the feature you could run anywhere on the track, you could go three-wide out there without any problems.”

Bloomquist shared the front row with Steve Shaver of Vienna, W.Va., for the start of the race and quickly took control. The two-time, defending series champion opened up a six-car-length advantage over Shaver in the first five laps and started to catch slower traffic by the 10-lap mark.

The race’s only caution appeared on lap 16 when Chris Wall of Springfield, La., slowed on the backstretch. On the restart, Bloomquist continued his dominating performance as he pulled away from a closely contested battle for the second position between Shaver and Jimmy Owens of Newport, Tenn.

Owens briefly took the second spot away from Shaver in turn two on lap 41, but by the time the two reached the flag stand, Shaver had reclaimed the position. Shaver then pulled away from Owens in the final laps to secure the runner-up finish.

Owens held off a late challenge from Don O'Neal of Martinsville, Ind., to finish third. Ray Cook of Brasstown, N.C., followed O’Neal to the line in the fifth position.

Notes: Bloomquist's self-designed race car is powered by a Roush-Yates engine with sponsorship from Miller Bros. Coal, Base Fuel, Hawkeye Trucking and Allstar Performance. ... Bloomquist posted a new track record in time trials, becoming the first driver to record a lap under 19 seconds around the 75-year-old racetrack. ... Jared Landers’s ninth-place finish was tops among the four series rookies. ... The race kicked off a Pennsylvania doubleheader weekend for the series. The tour will visit Roaring Knob Motorsports Complex in Markleysburg, Pa., Saturday night for another $10,000-to-win event.