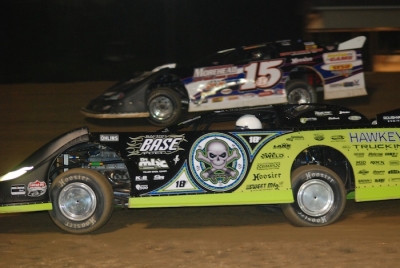 BROWNSTOWN, Ind. (April 9) — The only thing that might've stopped Scott Bloomquist on Saturday at Brownstown Speedway was heavy morning rains that threatened to postpone a program already postponed once by bad weather.

The $10,000 victory also marked his second straight series triumph at Brownstown, one of his best tracks where he captured last fall's Jackson 100. The Mooresburg, Tenn., Hall of Famer brought a new self-designed car, but the result was identical as he led all but eight laps in the 50-lap feature.

"We did a couple of little things (building the car) and it just feels a little bit different," said the third-starting Bloomquist, who took the lead from outside front-row starter Steve Francis of Ashland, Ky., shortly after a lap-seven restart. "It's not quite as good as the car at the Jackson, but still, it felt really good, and we just need to do a little more tuning I think."

A little more tuning and the 47-year-old Bloomquist wouldn't have been in the same time zone as competitors who futilely tried to keep up with the black and green No. 0 car.

After Francis clipped an infield tire barrier on the 15th lap, damaging his car's nosepiece, he faded and Mike Marlar and Don O'Neal failed to keep up during their time in the second-place spot.

Bloomquist had more than a half-staightaway margin at the halfway point, and rarely had fewer than three lapped cars between his car and O'Neal's pursuing No. 71 over the final 15 laps.

O'Neal was fortunate to end up second at all after slipping over the turn-three banking on the second lap, knocking him briefly outside the top five.

"I thought I'd thrown it away then, and I had a decent race car," said the Martinsville, Ind., driver, a former Brownstown champion who launched his Late Model career at the fairgrounds track. "We just kept digging at it and got back up there, and at one point I thought we had a shot. But we caught that lapped traffic, and Scott could just move around that lapped traffic better than I could. We just hung on to second."

Barely. Earl Pearson Jr. of Jacksonville, Fla., stormed forward from his 18th starting spot, aided by a last-minute decision for a softer tire compound on a track that retained some of the morning moisture.

"If we could've started up front, there's no doubt I think we could've won the race, by far," a disappointed Pearson said. "I mean, to come through all through them guys and run O'Neal down and Scott ... I mean, the car was really good here."

Pearson pulled alongside O'Neal exiting turn two in the last 10 laps, but the drivers got hung up and O'Neal protected his inside line the rest of the way.

"To start way back where we did and come up through there and to finish third, we're tickled to death with that," Pearson said.

Brian Birkhofer of Muscatine, Iowa, rallied from 10th to finish fourth while last year's Indiana Icebreaker winner Jimmy Owens of Newport, Tenn., who started 17th, rounded out the top five. Marlar, of Winfield, Tenn., settled for sixth just ahead of polesitter Bub McCool of Vicksburg, Miss., who led the first lap but couldn't keep up with the leaders. Francis ended up 13th.

The day's weather meant Brownstown's surface wasn't typical, but the outcome was for Bloomquist, who has captured several major events at the track starting in the late 1980s.

"Look at the straightaways right now, and they're still muddy," Bloomquist said. "That's not normal for this racetrack. That made us make a little different tire choice, but when we got out on the racetrack, it looked like everybody geared up the same way, so we weren't too worried."

Two cautions slowed the feature, the first on lap seven for a slowing Tyler Reddick and the second for Steve Casebolt's lap-17 spin in turn four.

Notes: Bloomquist's car is powered by a Roush-Yates Chevy powerplant and sponsored by Miller Bros. Coal, Base Fuel, Hawkeye Trucking and Allstar Performance. ... Bloomquist has 506 career victories overall. ... The race was originally scheduled for March 26 but postponed because of wintry weather. ... Saturday afternoon's weather was more like summer with temperatures in the low 80s under clear skies. ... Shannon Babb of Moweaqua, Ill., started sixth and ran in the top five early. After dropping a few spots he pitted on the 17th lap and was never a factor. ... Among drivers failing to make the main event: Kevin Claycomb (banged around in consolation in Scott Clippinger-owned car), Rohn Moon (fast qualifier struggled in heat), Josh McGuire (retired in heat), Matt Miller (caught up in heat scramble), Michael Chilton, Chris Brown, Frank Heckenast Jr. and Sammy Stile of Charleroi, Pa., making a rare series start. ... Next up for the Lucas Oil Series is April 29-30 weekend action at Bedford (Pa.) Speedway and Roaring Knob Motorsports Complex in Markleysburg, Pa. Both events pay $10,000 to the winner.