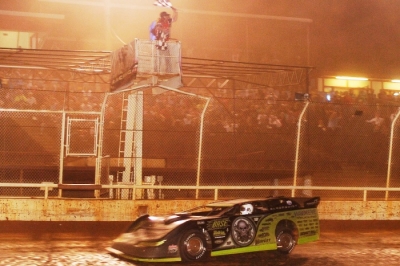 KILGORE, Texas (April 2) — In a race that came down to tire selection, Scott Bloomquist outsmarted the rest of the field at Saturday night’s Lucas Oil Late Model Dirt Series race at Lone Star Speedway and earned a $20,000 victory at the east Texas racetrack.

The 10th-starting Bloomquist was one of few drivers to select a hard right-rear tire compound for the 100-lap feature on the abrasive 3/8-mile racetrack, and while other contenders fell out of contention with tire wear issues late in the race, Bloomquist came to life. | Slideshow

The Hall of Fame driver from Mooresburg, Tenn., overtook a badly fading Shannon Babb for the lead with nine laps remaining and led the remainder of the race to score his series-leading 28th Lucas Oil victory of his career.

“We knew going into the race it was gonna come down to tires,” said Bloomquist, the two-time defending Lucas Oil Series champion. “I think a lot of guys were just afraid to put on something a little harder. ... I was confident, and when I saw them other boys make it to lap 80, I knew I was gonna finish so I started turning it up a notch.”

Before Bloomquist made his run to the front, the fourth-starting Babb of Moweaqua, Ill., appeared to be headed to victory in what his first race of 2011 and his first race in his new Victory Circle by Moyer Race Car.

Babb dominated the majority of the race after powering by second-running Don O’Neal of Martinsville, Ind., and race leader David Breazeale of Four Corners, Miss., on a lap-six restart. Babb pulled to nearly a straightaway advantage at times, while positions were shuffled behind him.

The seventh-starting McCool moved by Breazeale on a lap-31 restart and set his sights on Babb. McCool closed in on Babb around lap 45 and even pulled alongside the leader on lap 48. But a caution at the halfway point slowed McCool’s challenge, and a bottleneck on the ensuing restart shuffled him back to fourth.

With Breazeale regaining second, Babb again stretched his lead over the next 25 laps, before tire wear became an issue.

Bloomquist had worked his way to fifth by the time Richmond, Ind., driver Steve Casebolt’s flat right-rear on lap 75 started a series of flats.

Breazeale was the next to go down, slowing on lap 83. McCool’s right-rear also went flat during the caution for Breazeale, and Bloomquist was up to third.

Both Babb and second-running O’Neal began to fade drastically over the next few laps, as both drivers attempted to nurse their badly worn tires to the finish.

After moving by O’Neal on lap 87, Bloomquist quickly ran down Babb and made the winning pass on lap 91.

"We had a good race there with O'Neal for a while, and once I got passed him, I knew there was enough time left to catch Shannon,” Bloomquist said. “We were fortunate enough to close quickly on him and he left the door open there just enough for us to get by."

While Bloomquist cruised to the victory, Babb’s night got even worse. He gave up the second position when his right-rear went flat with just four laps remaining, relegating him to an 18th-place finish.

“I knew when everybody started popping tires that we had to be really cautious,” Babb said. “I was letting off at the flagstand and cruising in. (Bloomquist) definitely had the hardest tire on tonight and it showed up there at the end. You’ve gotta have a lot of things go your way. I was just praying to get to the end of that thing, but we didn’t make it all the way there.”

Dennis Erb Jr., who ran outside of the top 10 for most of the race, benefitted from the tire issues, moving up late in the race to score the runner-up finish. He thought he had a car capable of challenging for the win, but his tire also began to go away in the closing laps.

“The way the racetrack was we knew it was gonna be hard on tires. We just had to ease our way up there and hope it lasted,” Erb, of Carpentersville, Ill., said. “My car was real good we just ran out of tire.”

Notes: Bloomquist’s self-designed chassis has a Roush-Yates engine with sponsorship from Miller Bros. Construction, Hawkeye Trucking, Hoosier Tires and Allstar Performance. ... The race was slowed by 10 cautions. Nine of those involved just one car. ... The only caution involving multiple cars was the first caution, which came on lap six when Billy Moyer Jr., of Batesville, Ark., and John Blankenship of Williamson, W.Va., got together in turn two. ... Jared Landers of Batesville, Ark., ran in the top five for much of the race, but faded late and suffered a flat right-rear on lap 82. He finished 12th. ... The victory is Bloomquist’s first in the state of Texas. “Anytime you win in a different state or somewhere you’ve never won, it always feels great,” he said. ... Earl Pearson Jr. was the hard charger of the race. He advanced 18 positions from 22nd to finish fourth. ... Babb was not the hard luck driver of the race. That award went to Blankenship who finished 25th after dropping out early. ... At least eight drivers suffered flat right-rear tires during the final 25 laps of the race.

Because of technical difficulties, video reports from Lone Star Speedway aren't available. Videos will be uploaded as soon as possible.