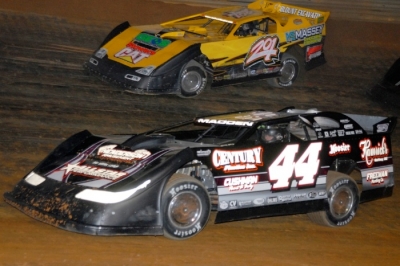 Madden overtook polesitter Tommy Kerr of Maryville, Tenn., following a second-lap restart and led the remainder of the unsanctioned 60-lapper. Jimmy Owens of nearby Newport, Tenn., looked underneath Madden a few times in traffic late in the race, but Madden was able to pull away each time and cruised to the victory.

“I really like coming and racing here,” Madden said. “It’s been good to us and we’ve won some big races here. We had a great car tonight. We knew Jimmy would be tough coming into it, and we were able to hold him off.”

The early portions of the race were plagued by several cautions. Two multicar pileups resulted in the race being red-flagged twice before five laps were completed, and by lap 10 the race had been slowed by three more cautions.

After moving from fourth to second by lap five, Owens pressured Madden on a few of the early restarts, but never had enough speed to complete the pass.

The race ran much smoother after the 10-lap mark as the field began to settle in and Madden began to pull away.

Owens was no match for Madden on open track, but slower traffic allowed him to close the gap. He looked under Madden as the two Bloomquist Race Cars drivers raced through traffic and even pulled under Madden on lap 41. But Madden pulled ahead, and rebuilt his comfortable lead after he cleared the slower cars.

Racing through the traffic brought back memories for Madden of another race at Volunteer when traffic cost him a victory.

“It’s always easier to run second in lapped traffic than it is to lead in lapped traffic. If you pick the wrong line your screwed.” Madden said. “I just had to make sure I was positioning them guys where I could clear them, where I didn’t have to race them and give Jimmy the opening to pass me. I’ve lost one up here like that and I wanted to make sure it didn’t happen again.”

Madden didn’t allow it to happen again, and Owens was forced to settle for the runner-up finish.

“It’s a good run,” Owens said. “Congrats to Chris. He had a really good car tonight and we’re glad to come home second with nothing tore up. ... We were a little tighter than we need to be and he just had the better car tonight.”

Madden’s victory is his second of the season, and it continues what he hopes is a turnaround in his performance last year. While he did score some major victories in 2010, his win total was down from years past and he hopes the early-season success in 2011 is a sign of things to come.

“We’ve got two wins here already this year so that’s a big help,” Madden said. “I don’t think we even won a handful last year. We’re running good. We started running good at the end of the last year and we’re still headed in the right direction for sure.”

Austin Dillon of Welcome, N.C., started fifth and advanced to third early in the race. He ran close to Madden and Owens until near the halfway point. He faded back from the two leaders late in the race, but held on to post the solid third-place finish.

The race’s front-row starters didn’t fare very well. Kerr remained in the top five until a flat tire sent him to the pits on lap 18. His crew changed the tire under caution, but his race ended when he got into the turn-two wall on lap 23.

Ray Cook of Brasstown, N.C., earned the second starting position after winning a heat race, but he had suspension problems on the first attempted start of the race and was forced to retire before a lap was completed. Cook’s misfortune moved Billy Ogle Jr. of Knoxville, Tenn., to the outside pole, but he broke a driveshaft with just seven laps complete.

Notes: Madden's Cornett-powered Bloomquist Race Car is sponsored by Century Plastics, Cushman Paint & Body, Freeman Plumbing and Hamrick's of Gaffney. ... The race was slowed by seven cautions and was red flagged twice. ... Jared Landers of Batesville, Ark., got crossed up exiting turn four on the first lap, causing a six-car pileup on the front straightaway. ... Another six-car pileup occurred on lap two, this time on the backstretch. ... Jonathan Davenport of Blairsville, Ga., was collected in the first-lap mishap, but battled back to a seventh-place finish after pitting twice. ... Ronnie Johnson of Chattanooga, Tenn., returned to Volunteer Speedway for the first time in more than five years Saturday, but had a difficult night. He was battling for third in a heat race when a flat tire sent him to the pits. He ran second in the consy to transfer to the feature, but was caught up in the lap-two wreck. ... Randy Weaver of Crossville, Tenn., drove a Bloomquist Race Car owned by Kerry Jones of Bristol, Tenn., last weekend at Cleveland Speedway, but Jones was behind the wheel at Volunteer. He finished 12th.