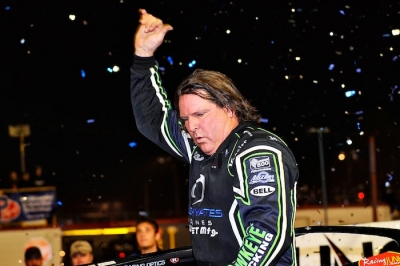 Duplicating his triumphant performance in the national tour’s season opener on Thursday night, Bloomquist advanced from the fourth starting spot to pass Billy Moyer of Batesville, Ark., for the lead on lap 31 and was never headed. He spent the final 15 circuits repelling intense pressure from Smith to become the first driver to win both WoO features that are annually part of the mid-winter racing extravaganza at the half-mile oval outside Daytona Beach. | Complete Speedweeks coverage

“This is a tough field,” Bloomquist said after pocketing $10,000 for his 21st WoO victory since 2004. “This is a tough place this week — very demanding on the car, drivers, engines. It feels good to do what we’ve done this week.”

Smith, 33, settled for his second consecutive runner-up WoO finish to the builder of his Team Zero by Bloomquist car. The winner of last year’s World of Outlaws finale during the DIRTcar Nationals by UNOH was just 0.637 of a second behind Bloomquist at the checkered, nearly two seconds closer than he was at the end of Thursday night’s 50-lapper.

Of the top six finishers, only Moyer was not behind the wheel of a Team Zero chassis constructed by Bloomquist. That fact added even more significance to Bloomquist’s victory.

“It makes me feel good,” said Bloomquist, who owns four career WoO victories at Volusia. “I think it pretty much takes any doubt away from anyone’s mind about the level that I try to help the guys who get our cars. I try to give as much advice and do as much as I can for them.

“If I would’ve gotten beat by one of my own cars, hey, so be it. I really like the group of guys that I’ve got and enjoy working with them, and I enjoy the respect that they give me back. I think when you see Team Zero you can see that it means something.”

Bloomquist, 47, had to withstand an especially strong assault from Smith, one of his customers. Smith, who started sixth, overtook Moyer for second on lap 33 and two circuits later began bidding for the lead.

Smith made repeated attempts to pass Bloomquist over the late stages of a race that ran caution-free from lap seven to the finish. He drew to the outside of Bloomquist at least twice and even got close enough to bump the rear bumper of the 2004 WoO champion’s car rounding turn four on lap 37, but Bloomquist stuck to the inside groove and didn’t make a mistake.

“I think I was faster on that end (turns three and four) but on this end (one and two) he was a little bit better than I was,” said Smith. “I could get in and to the middle better than him, but just coming off the corner, if you were up the racetrack, there was nothing there compared to what the bottom was. When you were on the bottom you could just mash the gas coming off the corner. The bottom had more traction than the middle or the top.

“I drove as hard as I could, that’s how I race,” he added. “But he’s Scott Bloomquist. There’s a reason he’s the best. He’s not gonna be easy to pass. I felt like we had a car that could do it, but at the same time I feel like I did everything I could do so maybe we were the second-place car.”

Bloomquist enjoyed engaging in a tight, down-to-the-wire battle with one of his boys.

“I think they all will race me as hard as I’ll race them,” said Bloomquist, whose car was powered by a Roush-Yates Ford engine. “None of us are gonna give anybody nothing, and that’s what I like. But we’re also not gonna take somebody out or race in a fashion that we consider wrong. I feel comfortable when I’ve got one of my guys behind me, but I also know I better not make a mistake either.”

Four caution flags and one red flag slowed the race — all during by lap seven.

The most significant crash was a multi-car incident on lap seven in which Jack Sullivan of Greenbrier, Ark., rolled once in turn four but wasn’t injured. WoO regular Tim McCreadie of Watertown, N.Y., tour Rookie of the Year contender Pat Doar of New Richmond, Wis., Dan Stone of Thompson, Pa., and Mike Marlar of Winfield, Tenn., were also involved in the tangle.

Finishing in positions 7-10 was Don O’Neal of Martinsville, Ind., who started 18th; two-time defending WoO champion Josh Richards of Shinnston, W.Va., who climbed as high as third from the eighth starting spot before getting shuffled backward on a lap-seven restart; 2010 WoO Rookie of the Year Austin Hubbard of Seaford, Del.; and Brent Robinson of Smithfield, Va., who was the last driver on the lead lap at the checkered flag.

Eddie Carrier Jr. of Salt Rock, W.Va., was pretty happy following his heat race victory, especially after all the bad luck he’s had this week at Volusia. “We’ve had a pretty rough week over here,” Carrier said. “We’ve had a good car, just some bad luck. Hopefully we’ll turn that around tonight. If we just come out of here with a top five I’ll be happy, but maybe we can take that eagle (trophy) home tonight.”... Brandon Sheppard of New Berlin, Ill., finally has his car dialed in at Volusia after enlisting the help of fellow Illinois driver Jason Feger. “We’ve been working on this thing the past few nights and we really figured some stuff out last night,” Sheppard said after winning the third heat race. “Jason Feger’s been helping me out. I think we’re gonna have a pretty good car tonight.” ... After missing the week’s first five races, Darrell Lanigan of Union, Ky., advanced from fourth to second in his heat race, but a dead battery on the final lap left him coasting to a fourth-place finish. He battled side-by-side with Jonathan Davenport to win the second consolation race. ... Jimmy Mars was running in a transfer position in the same heat as Lanigan, but his engine blew on the final lap. He’ll use a UMP provisional and run Pat Doar’s backup car in the feature. ... Track crews reworked the racetrack after the Late Model consolation races.

Brady Smith took the lead on the start of the sixth heat race and led every lap for the victory. Fifth-starting Brent Robinson charged through the field early and moved by Don O'Neal for the second position midway through the race. He briefly closed the gap on Smith, but faded late and settled for second. The pole-starting O'Neal finished third.

Eddie Carrier Jr. and Chris Madden spit polesitter Clint Smith on the first lap of the fifth heat race and battled side-by-side for the first two laps. Carrier took the position and held off repeated challenges from Madden the entire distance to take the win. Madden settled for second with fifth-starting Ryan Unzicker taking the third and final transfer position. Smith finished fourth.

Billy Moyer took the lead on the start of the fourth heat race and held off an early challenge from Tim McCreadie for the victory. McCreadie finished second while Pat Doar received an early Christmas gift in the form of a third place finish and a feature transfer. Darrell Lanigan moved by McCreadie for second with two laps remaining, but slowed exiting turn two on the final lap. Fourth-running Jimmy Mars assumed the third position, but his car slowed and came to a stop in turn four. That gave third to Doar while Lanigan coasted to a fourth-place finish.

Brandon Sheppard moved to the lead on the start of the third heat and led every lap for the victory in the caution-free race. Fourth-starting Ricky Weiss moved by Jonathan Davenport midway through the race to take third and ran down Dan Stone for to claim the runner-up finish. Stone settled for third to also transfer to the feature.

Scott Bloomquist started from the pole and led every lap to win the second heat race. Tyler Reddick and Josh Richards battled hard for the second position with Richards taking the position at the finish. Reddick finished third to also transfer to the feature. Jared Landers got the jump from the outside pole on the first attempt to start the race, but the start was waved off and Landers was penelized for jumping the start and moved back a row. He finished sixth. The race's first caution appeared on lap five when Steve Francis and Ron Davies got together in turn two. John Lobb brought the caution out one lap later when he spun in turn four.

Jason Feger moved to the lead on the start of the first heat race and led every lap for his fourth heat race victory of the week. Rick Eckert chased Feger the entire distance and finished second. Dan Schliper finished in the third and final transfer position in the caution-free race. Mike Marlar started from the pole, but quickly faded out of the top three. He finished fourth.

Mike Marlar of Winfield Tenn., was the fastest of 60 qualifiers during time trials for Saturday night’s DIRTcar Nationals by UNOH event at Volusia Speedway Park.

Marlar posted a lap of 16.142 seconds at the half-mile racetrack and will start from the pole of one of six heat races coming up. Unofficially the other heat race polesitters are: Scott Bloomquist of Mooresburg, Tenn.; Brandon Sheppard of New Berlin, Ill.; Billy Moyer of Batesville, Ark.; Clint Smith of Senoia, Ga.; and Don O’Neal of Martinsville, Ind.

Former World of Outlaws champion Darrell Lanigan will compete at Volusia Saturday night after missing the week’s first five race’s due to illness. The Union, Ky., driver finished second to Josh Richards in the 2010 World of Outlaws standings. His bid to overtake Richards for the title in 2011 took a huge hit by missing Thursday night’s season opener. He did receive 60 hardship points for the missed event. ... Jason Feger’s crew swapped rear-ends in his Pierce Race Car and replaced right-side sheet metal after the Bloomington, Ill., driver broke an axel and got into the wall while leading Friday night’s feature. ... Chris Madden of Gray Court, S.C., and Brent Robinson of Smithfield, Va., both took Friday night off and are back in action Saturday. ... Rick Eckert’s crew swapped engines in his Bloomquist Race Car for Saturday night’s race after the York, Pa., driver’s engine didn’t run up to par during his second-place effort Friday night. ... Mike Marlar of Winfield, Tenn., had mechanical issues during his heat race Friday night. He hopes repairs made by his crew have the problems solved. ... After Friday night’s racing produced a locked-down racing surface, World of Outlaws officials have added track maintenance breaks to Saturday night’s schedule. If necessary, the breaks will take place after Late Model heat races and consolation races.