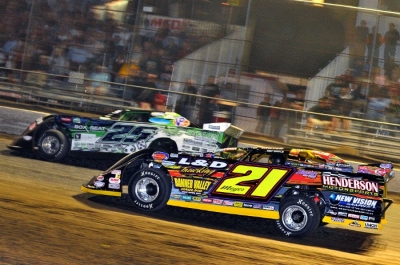 Backing up his victory in the opener of the full-fender meet on Monday night, Moyer inherited the lead on lap 12 when Jason Feger of Bloomington, Ill., pulled up lame with a broken rear axle tube and dominated the remainder of the distance. The 53-year-old Dirt Late Model Hall of Famer pocketed $10,000, pushing his earnings for the week over the $20,000 mark. | Complete Speedweeks coverage

Moyer recorded his seventh triumph in DIRTcar Nationals by UNOH competition since 1998. It marked the second time that he’s won the mid-winter racing spectacular’s marquee UMP Late Model event, six years to the day since his first victory in the race.

This score came in convincing fashion. Moyer swiftly moved to the front from the fifth starting spot, reaching second with a lap-nine pass of Eckert and then running down Feger to begin challenging for the lead just as the race-long pacesetter’s car stopped with mechanical woes on lap 12 to bring out the race’s lone caution flag.

“The plan wasn’t to shoot right to the front,” said Moyer, who enters Saturday's Volusia finale trailing only Mars in the battle for the event points crown. “You just do it by instinct, do what you can do. It just so happened that the doors opened up and I got up there pretty quick.

“Rick had a good car, but he got a little bit free there for a lap or two and I was able to get by him. I was glad I did because the track tightened up there about halfway through.

“We’re real happy,” he added. “One night we were off this week (his only run worse than sixth is a 16th-place finish on Wednesday), so all in all we’ve had a pretty good Speedweek.”

Eckert, 45, made his visit to the Sunshine State much more enjoyable with a breakout runner-up outing. His hopes for victory, however, were effectively dashed when Moyer overtook him for second place.

“When we fired off the start there was a little bit of rubber down the back straightaway all the way out by the wall,” said Eckert, who needed just five laps to move from the sixth starting spot to second. “I struggled off (turn) two for traction, so I would just chase myself out there to the wall and then I could get a run down the backstraightaway — not realizing, though, that (the track) was starting to pick up on the bottom.

“Billy slipped by me on the bottom and then I moved down and there was traction. Once I moved where he was I figured out his groove was much better than the one I was running. It was my own fault that I didn’t go down there sooner. I just didn’t search around.”

Despite falling short of a five-figure win, Eckert was pleased with the speed he flashed with his Team Zero by Bloomquist mount.

“My car’s been good, but the track’s been hammer-down to the cushion and that’s made it tough for me,” said Eckert, who finished 13th, 24th, 17th and 13th in the week’s first four events. “Tonight the track finally got to where I could make some time off that cushion and keep up with them or pass them.

“I wish (tonight) was the Outlaw race. I hope we run this good tomorrow night. But it’s good that we had a run like this no matter what. I thought I was gonna become a Florida resident. Until tonight, I about didn’t make enough money to buy diesel fuel to get back home.”

Finishing in positions 6-10 was 10th-starter Josh Richards of Shinnston, W.Va.; 11th-starter Earl Pearson Jr. of Jacksonville, Fla.; John Blankenship of Williamson, W.Va., whose advance from the 22nd starting position made him the hard-charger of the race; 15-year-old Tyler Reddick of Corning, Calif.; and Tuesday's winner Don O’Neal of Martinsville, Ind. — Kevin Kovac

Rick Eckert won his heat race, but he wasn’t happy with his engine’s performance. “It’s not running like it’s gonna blow up, just isn’t running up to par,” Eckert said. Without enough time to perform an engine swap, he’ll run the engine in the feature and hope for the best. ... A frustrating week got even more frustrating for Shane Clanton when he blew an engine in time trials. He missed his heat race while swapping the engine and made it to the track just in time for his consolation race. But he only advanced to fifth in the race that transferred the top two finishers. ... Steve Francis made heavy contact with the inside wall in a heat race accident and will go to his backup car after receiving a provisional starting spot for the feature. ... Mike Marlar had oil temperature issues in his heat race and didn’t start the consolation race. He hopes to have the issues remedied for Saturday. ... Jonathan Davenport and Jason Feger will start from the front row of the feature by virtue of the redraw.

Billy Moyer started from the pole and led every lap to win the sixth heat race. Dan Stone finished second, while Ricky Weiss finished third to transfer to his first Speedweeks feature. The race's only caution appeared with four laps complete when Ron Davies slowed while running in the top five.

Austin Hubbard moved by Dale McDowell on lap four of the fifth heat race and pulled away for the victory. McDowell, Dan Schlieper and Earl Pearson Jr. all battled for second in the closing laps. The three drivers went three-wide in turn four on the final lap with Pearson taking the position over Schlieper. McDowell finished fourth and will attempt to transfer for the feature through a consolation race.

Sixth-starting Rick Eckert charged to the front of the fourth heat race and passed polesitter Chub Frank for the lead on lap five. He pulled away in the closing laps to score the victory. Frank finished second while Eric Wells held off Dennis Erb Jr. for the third and final transfer position.

Jason Feger scored a convincing victory in the third heat race, leading every lap from the pole. Jimmy Mars held off an early charge from Will Vaught to claim second in the caution-free race. Vaught finished third to also transfer to the feature.

Jonathan Davenport led every lap to win the second heat race after holding off an early challenge from Tyler Reddick. Reddick finished second after nearly hitting the wall midway through the race. Josh Richards passed Jared Landers for third on lap four and held on to the transfer position at the finish.

Polesitter Don O'Neal took control of the lead on the start of the first heat race and led every lap for the victory. Pat Doar ran second for nine laps, but lost the spot to Scott Bloomquist on the final lap. Doar had to settle for the third and final transfer position. The race's first caution came on lap three when Larry Wight spun in turn four. John Henderson and Steve Francis got together on the restart, causing Francis to make contact with the inside wall.

Austin Hubbard of Seaford, Del., was the fastest of 60 qualifiers during time trials for Friday night’s DIRTcar Nationals by UNOH event at Volusia Speedway Park.

Hubbard posted a lap of 16.145 seconds at the half-mile racetrack and will start from the pole of one of six heat races coming up. Unofficially the other heat race polesitters are: Don O’Neal of Martinsville, Ind.; Jonathan Davenport of Blairsville, Ga.; Chub Frank of Bear Lake, Pa., Jason Feger of Bloomington, Ill.; and Billy Moyer of Batesville, Ark.

The first four nights of the six-race miniseries have produced four different feature winners. Moyer, O'Neal and Jimmy Mars of Menomonie, Wis., were the winners of the first three races, which were all $7,000-to-win UMP-sanctioned events. Scott Bloomquist of Mooresburg, Tenn., claimed a $10,000 victory in Thursday night’s feature, which was the season opener for the World of Outlaws Late Model Series.

The pit area at Volusia is noticeably slimmer as Speedweeks has come to end for some drivers. The car count is down to 60 Friday night, after being as high as 74 earlier in the week. Some drivers left by choice, while others simply ran out of equipment. ... Jimmy Owens of Newport, Tenn., is done for the week after blowing an engine Wednesday night. ... Frank Heckenast Jr. of Frankfort, Ill., was contemplating a run for the World of Outlaws Rookie of the Year in 2011, but that may not happen after he missed the series opener Thursday night. He had engine problems Wednesday night and is also done for the week. ... Wendell Wallace, Billy Moyer Jr., and Ken Schrader are among other drivers who have left Volusia. ... Tim McCreadie’s crew had a busy day Friday. The Watertown, N.Y., driver broke an axel tube on his primary car in his heat race Thursday night and had problems with the engine in his backup car in the feature. His crew replaced the axel tube and swapped the engine prior to Friday’s action. ... Chris Madden of Gray Court, S.C., is taking Friday night off. He plans to be back in action for Saturday night’s race.