Richards's streak is over as Bloomquist triumphs 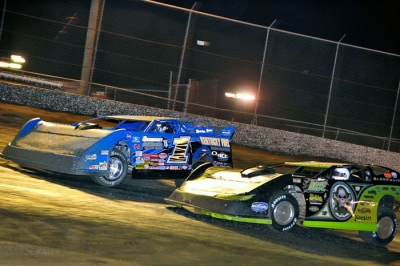 Racing through gritted teeth on a fast, physical track due to a sore shoulder and ribs, Bloomquist took advantage of Richards’s losing bout with the half-mile oval’s ample cushion to capture the 50-lapper at the 40th annual DIRTcar Nationals by UNOH. | Complete Speedweeks coverage

Bloomquist, 47, of Mooresburg, Tenn., regained command of the race on lap 42 after Shinnston, W.Va.’s Richards slammed the dirt curb between turns one and two and lost momentum. The 2004 WoO titlist controlled the remainder of the distance to record his 20th victory on the national tour since ’04.

Richards, who advanced from the seventh starting spot to take the lead from Bloomquist on lap 29, saw his bid for an unprecedented fifth consecutive win in the WoO lidlifter end when his Rocket Chassis house car’s right-rear wheel broke off exiting turn two on the final circuit as he ran second. The 22-year-old, two-time defending series champion limped around the track on three wheels to cross the finish line in 14th place.

Austin Hubbard of Seaford, Del., celebrated his 19th birthday — and the start of his sophomore season on the series — with a solid third-place finish in Dale Beitler’s Rocket car. Jared Landers of Batesville, Ark., registered a WoO career-best placing of fourth in NASCAR star Clint Bowyer’s Rocket and 13th-starter Don O’Neal of Martinsville, Ind., completed the top five in Larry Moring’s MasterSbilt mount.

Bloomquist, who started from the pole position, felt the effects of the tough conditions after pocketing $10,175 for his first triumph during the DIRTcar Nationals by UNOH since a WoO event on Feb. 8, 2004.

“I’m wore out,” Bloomquist said following a race that was slowed by just two caution flags. “This track’s pretty demanding, and I tore my left shoulder muscle and bruised my ribs in that rough stuff at Ocala (Speedway) on Sunday so there was a little bit of pain involved. When you jump the cushion and you gotta grab a handful of (steering) wheel to give it all you got to get out of there, it hurts.

“But when you’re racing, you can overcome that. It’s afterwards when you feel it the most, but it’s all worth it to win the race.”

Bloomquist appeared headed to a runner-up finish, however, after Richards made a breathtaking move between him and a lapped car off turn four to take the lead on lap 29. Richards perched his machine in the outside groove and maintained a short edge over Bloomquist as the race wound down.

But when Richards hit the cushion working lap 41, Bloomquist seized the moment to grab the lead. Richards was unable to mount another challenge; his impact with the berm was so violent that it bent his car’s right-rear wheel, which eventually broke and flew off.

“He got in a little hot, didn’t get the car turned enough and got out in the stuff,” Bloomquist said of the moment that cost Richards. “He always seems to dance with the devil. The problem is, it’s hard to get out of (the cushion) once you get in it, and that’s all it took. He did get it out of it, but not in time.

“Once I got the lead back I was pretty sure I wasn’t gonna give it back again. When (Richards) got by us I tried running low and there just wasn’t enough to get up off the corner. The high line was better at that time of the race, but once he made that mistake we were pretty confident we weren’t gonna give it up again.”

Smith, who won last year’s WoO finale during the DIRTcar Nationals by UNOH, slipped by Richards for second on lap 45 but gave the spot back when he scrubbed the homestretch wall on the 48th circuit. The 33-year-old driver avoided Richards — and Richards’s flying wheel — on the last lap to regain second place.

“I was driving as hard as I could,” said Smith, who spent much of the race’s second half battling for position with Hubbard. “But if I gotta take second, he’s (Bloomquist) the one I want to take second to. We’re happy and I know we got a helluva chance to get to victory lane here the next two nights.”

Hubbard, the 2010 WoO Rookie of the Year, ran as high as second early in the distance but couldn’t quite match the leaders’ pace.

“We were really good in the beginning but once we got some heat in the tires we started getting tighter,” said Hubbard, who started fourth. “I just couldn’t run that line I was running, sweeping across the bottom of three and four and riding up. We just got up on the cushion and kind of held on.”

The race’s only caution flags were produced by cars rolling slowly due to steaming engines — on lap 12 for Eric Jacobsen of Sea Cliff Beach, Calif., lap 29 for Clint Smith of Senoia, Ga.

Surprisingly absent from the evening’s action was 2008 WoO champion Darrell Lanigan of Union, Ky., who finished second in last year’s points standings. He flew home on Monday afternoon because he wasn’t feeling well and was planning to return for Thursday night’s program, but before he could get on a plane health issues forced him to remain in the Bluegrass State. — Kevin Kovac

Austin Hubbard and Chris Madden had differing views of their heat race battle that left Madden with a second-place finish in the fifth heat. “He doored me and I’m not sure what his problem was, but I guess he didn’t like me passing him,” Hubbard said after the race. Madden didn't feel as though the contact was too significant and wasn't pleased with Hubbard's comments. “I don’t know what he’s talking about," Madden said, spicing his comments with unpublishable language. "I don’t know what the kid’s problem is. He’s an (expletive) spoiled brat as far as I’m concerned.” ... Of course, Madden drives a Bloomquist Race Car and it was just seven days ago that Hubbard door-slammed Bloomquist at East Bay Raceway Park as they battled for the lead in a heat race.... Eddie Carrier Jr. finished third in his heat, but needed a push back to the pit area after the race. His water pump belt came off and he shut the engine down after crossing the finish line. It didn’t hurt Carrier’s engine and he’s replaced the belt for the feature. ... Jimmy Owens lost an engine in his heat race. Instead of changing the engine, Owens is done for the weekend.

Polesitter Eric Wells cleared Earl Pearson Jr. on the first lap of the sixth heat race and held on to the lead as Pearson challenged for the top spot the entire distance. Pearson settled for the runner-up finish while Eric Jacobsen survived an early challenge from Casey Roberts to claim the third and final transfer position.

Austin Hubbard used a turn-four slidejob to take the lead from polesitter Chris Madden on lap six of the fifth heat race and claimed the victory. Madden finished second while Justin Rattliff held off Steve Francis to earn the third and final feature transfer.

Jonathan Davenport started from the pole and led every lap to win the fourth heat race after turning back a early challenge from Brady Smith. Smith finished second while Tyler Ivey finished in the third and final transfer position. The race was slowed by two cautions. The first appeared on lap two when Tim McCreadie slowed in turn one with a flat right-rear tire. Mike Marlar spun on the restart, bringing out the second caution.

Polesitter Scott Bloomquist moved to the lead on the start of the second heat race and led every lap for the victory. Billy Moyer finished second after battling with Don O'neal for the position early in the race. O'Neal finished third and will also transfer to the feature. The race's only caution came with just one lap complete when Jason McBride spun to avoid the slowing car of Larry Wight.

Jason Feger started from the pole and led every lap to win the second heat race. Jimmy Mars moved by Shane Clanton for second midway through the race and held off Eddie Carrier Jr. for the runner-up finish. Carrier finished third to also transfer to the feature. The fourth-starting Clanton moved to second on the start of the race, but faded to fifth at the finish. The race was slowed by two cautions, the first coming when third-starting Jack Sullivan slowed in turns one and two.

Second-starting Jared Landers moved to the lead on the start of the first heat race and held off third-starting Josh Richards for the victory. Richards finished second while Dan Stone claimed the third and final transfer position. Jimmy Owens ran third early in the race, but fell out with mechanical problems on lap six. That gave the transfer position to the pole-starting Pat Doar, but he finished fourth after losing third to Stone near the end of the race.

Doar’s fast time is the second record-breaking lap of the week. Don O’Neal’s qualifying lap on Wednesday night broke the previous record of 15.932 set by Josh Richards on Feb. 2, 2009.

Doar will start from the pole of one of six heat races coming up. Unofficially the other heat race polesitters are: Jason Feger of Bloomington, Ill.; Scott Bloomquist of Mooresburg, Tenn.; Jonathan Davenport of Blairsville, Ga.; Chris Madden of Gray Court, S.C.; and Eric Wells of Hazard, Ky.

After debuting his new Capital Race Cars chassis earlier in the week, Shane Clanton of Fayetteville, Ga., is back in his Rocket Chassis for Thursday night’s World of Outlaws opener. “We’re not writing off our new car, there’s just a few things we need to fix on it that we can’t do until we get back to the shop,” Clanton said of the Capital chassis he designed and built with fellow Georgian and retired driver Marshall Green. Clanton unloaded his Rocket for Wednesday night’s Bulrush Dash and drove it to victory in the non-qualifiers’ race. ... Darrell Lanigan of Union, Ky., will not compete in Thursday night’s race. Lanigan, the 2008 World of Outlaws champion who finished second to Josh Richards in the final 2010 standings, was at Volusia earlier in the week, but flew home Monday after experiencing back pains. Lanigan planned to return to Volusia Thursday morning, but canceled those plans when the back pains persisted. Lanigan will receive World of Outlaws hardship points for the missed race. ... Wendell Wallace of Batesville, Ark., is skipping Thursday night’s race. He plans to return to action Friday. ... Brandon Sheppard of New Berlin, Ill., is switching to a backup a car Thursday after struggling to find the handle on his primary car. ... Billy Moyer Jr., of Batesville, Ark., is also switching to a new car for Thursday’s race. ... Brad Neat’s 2011 Speedweeks is over. The Dunnville, Ky., driver suffered engine problems in both of his race cars and after also having engine problems when he drove teammate Earl Pearson Jr.’s backup car Wednesday, Neat loaded up and headed home.