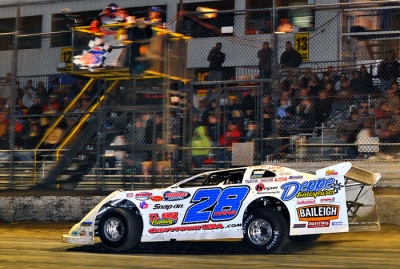 Jimmy Mars takes the checkers on Wednesday at Volusia. (thesportswire.net)

Erasing memories of his heartbreaking last-lap loss 24 hours earlier to Martinsville, Ind.’s Don O’Neal, Mars grabbed the lead from Jason Feger of Bloomington, Ill., on lap 16 and never looked back en route to his first win since 2000 at the half-mile oval. | Complete Speedweeks coverage

“Last night we gave one up on the (lap-27) restart, so I was sure hoping we wouldn’t have another one (late in the race),” said Mars, who reached victory lane at Volusia for the first time since 2000. “But the car was just stuck like suction cups out there. I’m telling you, this thing was unbelievable.”

Feger, 32, settled for a career-best DIRTcar Nationals finish of second after surging off the outside pole starting spot to lead laps 1-15 in his Pierce Race Car. He flashed under the checkered flag 7.659 seconds — over a full straightaway — behind Mars.

Scott Bloomquist of Mooresburg, Tenn., registered his best finish of the week, taking third after his bid to steal the runner-up spot from Feger fell just 0.072 of a second short at the finish line. Two-time defending World of Outlaws Late Model Series champion Josh Richards of Shinnston, W.Va., emerged from a multi-car position battle to place fourth for the second straight evening and 10th-starting Jonathan Davenport of Blairsville, Ga., finished fifth.

Mars, who turns 39 on Feb. 28, raved about the smooth Volusia racing surface, which produced a frenetic, non-stop feature that was completed in 9 minutes, 26.941 seconds.

“The track is beautiful,” said Mars, who is competing in the DIRTcar Nationals for the first time since 2007. “It’s a lot racier than what it used to be. There’s a lot of good track prep put into it.”

Feger was unable to stay with Mars, but he understood his shortcoming and was seen wearing a broad smile in the pit area following the race.

“We were set up to run the top,” said Feger, the 2009 DIRTcar UMP Late Model national champion. “We went with soft tires. I didn’t even realize those guys like Mars put on harder right-rear tires. I think if we would’ve had on the same combination as Mars I might’ve had a better chance to hold on.

“I know we would’ve been better toward the end of the race. The track definitely went away, but my tire went away too. We tore up the tire pretty good. I could feel it going away.

“I would’ve loved to get a win, but it’s pretty satisfying to have a run like this,” he added. “The best of the best are here, and this is by far our best run here. We struggled last year and Monday and Tuesday this week, so we’re definitely making progress with our program here.”

Steve Francis of Ashland, Ky., ran in the top five for much of the distance but was shuffled back to sixth in the final rundown. Dan Schlieper of Sullivan, Wis., advanced from the 13th starting spot to place seventh. Polesitter Mike Marlar of Winfield, Tenn., was running fourth on the 20th lap when he departed with a flat tire. — Kevin Kovac

Notes: Mars drives an MB Customs car with a Pro Power engine and sponsorship from Deppe Enterprises, T.L Sinz Plumbing and Keyes Chevytown. ... Shane Clanton of Fayetteville, Ga., was victorious in the 12-lap Bulrush Dash for non-qualifiers; he piloted his Rocket Chassis after parking his new Capital Race Cars mount for the night. ... Action continues at Volusia on Thursday with a doubleheader featuring the season-opening World of Outlaws Late Model Series event. The 50-lap feature pays $10,000 to the winner; Super DIRTcar Series big block modifieds are also in action.

After winning his heat race, Mike Marlar drew the pole for the night’s 30-lap feature. But he’d rather be starting second. “I think the outside’s the place to be,” Marlar said after watching the first consolation race. “It seemed like the track was getting better and better up there in the heats.” With Jason Feger scheduled to start alongside him, Marlar didn’t like his chances of getting the lead on the start. “I hear that’s where he’s good at,” Marlar said of Feger, who’s normally fast when running the high groove. “I’m gonna do my best to get him on the start, but I’m sure I’m gonna have to pass him at some point to win this thing.” ... Contact between front-row starters Jonathan Davenport and Steve Francis sent Davenport spinning in front of the field on the start of the fourth heat race. Both drivers continued on for the complete restart, and after the race they blamed the incident on hard racing. “The outside was the place to be and I think he just slid up in front of me,” said Francis, who went on to win the heat while Davenport finished second. “It was just one of them racing deals. We talked about it and no one’s mad or anything.” ... Eddie Carrier Jr., was running third in his heat race, but his chance to transfer to the feature was denied when fuel pump issues knocked him out of the race. It was the second night in a row that Carrier lost fuel pressure. He plans to swap engines before Thursday night’s race. ... Chris Madden was also running in a transfer position in his heat race, but a flat right-rear tire ended his run.

Clint Smith led every lap for the victory in the first consolation race. Six-starting Justin Rattliff made his way to second early, but John Blankenship passed him for the transfer position on the final lap. ... Jack Sullivan won the second consolation race, while Austin Hubbard edged Brady Smith and Frank Heckenast Jr., to also transfer to the feature. ... Billy Moyer won the third and final consolation race with Tim McCreadie claiming the runner-up finish.

Polesitter Josh Richards moved to the lead on the start of the sixth heat race and led every lap of the caution-free race. Dennis Erb Jr., moved around second-starting Rick Eckert early in the race and held on to the position as Eckert battled back in the closing laps. Eckert settled for third and will also transfer to the feature.

Scott Bloomquist took the lead over polesitter Don O'Neal on the start of the fifth heat race and led every lap for the victory. O'Neal, who set a new track record in time trials, ran second in the caution-free race. Will Vaught held off Billy Moyer in a photo-finish to claim the third and final transfer position.

Steve Francis started second and led every lap to win the fourth heat race. Polesitter Jonathan Davenport moved to the lead on the first attempt to start the race, but he spun in front of the field exiting turn two. Everyone avoided the spinning Davenport and the complete restart allowed Francis to take the lead. Davenport finished second after avoiding the near disaster on the first lap, with sixth-starting Casey Roberts finishing third to also transfer to the feature. Chris Madden ran third early in the race, but pulled off during a lap-two caution.

Jimmy Mars moved to the lead on the start of the third heat race and led every lap to take the win over polesitter Jimmy Owens. Earl Pearson Jr. ran a close third to also transfer to the feature. The race's only caution came on lap four when Eddie Carrier Jr. slowed with mechanical problems while running third.

Jason Feger took the lead on the start of the second heat race and led every lap of the caution-free race. Polesitter Ron Davies chased Feger the entire distance, but wasn't fast enough to make the pass. Dale McDowell ran a distant third to also transfer to the feature.

Mike Marlar started from the pole and led every lap of the first heat race. Dan Schlieper challenged Larry Wight for the runner-up position throughout the race, but Wight held the position at the finish of the caution-free race. Schlieper finished in the third and final transfer position.

O'Neal posted a lap of 15.813 seconds around the half-mile oval, breaking Josh Richards's record of 15.932 set on Feb. 2, 2009. O'Neal will start from the pole of one of six heat races coming up. Unofficially, the other five heat race polesitters are: Mike Marlar of Winfield, Tenn.; Ron Davies of Warren, Pa.; Jimmy Owens of Newport, Tenn.; Jonathan Davenport of Blairesville, Ga.; and Josh Richards of Shinnston, W.Va.

Wells Motorsports teammates Mike Marlar of Winfield, Tenn., and Eric Wells of Hazard, Ky., did not compete at Volusia Tuesday night after Wells’s father and team owner David Wells was involved in a traffic accident during the day Tuesday. Wells was taken to a Daytona-area hospital to receive treatment for injuries suffered in the accident. He was released from the hospital and is now back at the track to watch both drivers compete Wednesday night. ... Austin Hubbard of Seaford, Del., suffered his second blown engine of Speedweeks during hot laps Tuesday. Hubbard, who blew an engine during the Dart Winternationals by Magnaflow at East Bay Raceway Park, had to borrow an engine from Rocket Race Cars owner Mark Richards and will be back in action Wednesday night. ... Brad Neat has also had his share of engine problems during Speedweeks. After the engine in his primary car overheated at East Bay, the Dunnville, Ky., driver also suffered problems with the engine in his backup car Tuesday night. For Wednesday night’s event, Neat plans to drive the car that teammate Earl Pearson Jr. of Jacksonville, Fla., drove last week at East Bay. ... D.J. Wells of Wooton, Ky., missed the first two nights of competition at Volusia after suffering engine troubles during the East Bay finale Saturday night. Wells swapped engines Wednesday and is hoping to compete Wednesday night. ... Tim McCreadie of Watertown, N.Y., has switched cars for Wednesday’s race. He’ll be back in the car that he drove to a $12,000 victory in the East Bay finale. ... Tyler Reddick is taking Wednesday night off after an 11th-place run Tuesday. ... John Henderson of Aiken, S.C., is competing for the first time at Volusia Wednesday night. ... After competing in UMP DIRTcar Modified events earlier in the week, Ken Schrader of Fenton, Mo., is racing his Late Model for the first time this week. ... DIRTcar Big-Block Modifieds are also in action Wednesday night.

Note: Heat race lineups will be straight up from group qualifying.
First group