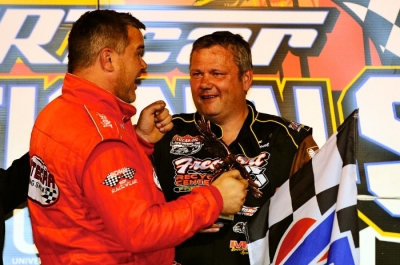 Flashing the form that made him a perennial star of the DIRTcar Nationals by UNOH from 2002-2004, O’Neal passed Jimmy Mars of Menomonie, Wis., on the final circuit to win the 30-lap DIRTcar UMP Late Model feature. | Complete Speedweeks coverage

The $7,000 triumph was the eighth of O’Neal’s career in DIRTcar Nationals by UNOH action – tops among all drivers since 1998. But it was his first win at the sweeping half-mile oval since the 2004 edition of the mid-winter racing classic.

“I don’t know if I can ever recapture that again,” O’Neal said of the Volusia magic that carried him to two wins in 2002, three in 2003 and two in 2004. “That was just one of them deals where you can do nothing wrong. But we have won two already this year (in Florida after also capturing Sunday night’s UMP-sanctioned event at Ocala Speedway), so maybe we can get another one this week and leave here feeling like we did back then.”

O’Neal, 46, returned to Volusia’s spotlight in dramatic fashion. He appeared headed to a third-place finish until a lap-27 caution flag appeared for the stopped car driven by John Blankenship of Williamson, W.Va.

The caution allowed O’Neal to vault past Brady Smith of Solon Springs, Wis., and Mars with a memorable outside charge behind the wheel of Larry Moring’s MasterSbilt machine.

Mars, who started second and led all but the final lap, fell to O’Neal’s top-side assault rounding turns three and four for the last time. O’Neal surged ahead off the fourth corner to narrowly edge Mars at the finish line.

O’Neal, who started fifth, climbed up to second by lap 12 before ceding the position to Smith nine circuits later. He was resigned to finishing third until the race’s second and final caution flag was needed on lap 27.

After immediately shooting to the outside of turns one and two on the restart to overtake Smith for second, O’Neal drew close to Mars. Mars slid up to repel O’Neal’s initial challenge off turn two on lap 28, but O’Neal made the outside work the next lap.

“That yellow flag sort of gave me a new life,” said O’Neal, who did not enter the DIRTcar Nationals by UNOH for the last two years. “I had never been on that top there (of turns one and two) the whole race, but I thought, ‘Man, I got nothing to lose running third here,’ so I hauled her off in there and that top was pretty good down there in one and two.”

Mars, who turns 39 on Feb. 28, fell short of reaching Victory Lane at Volusia for the first time since the 2000 DIRTcar Nationals by UNOH.

“A late-race caution kind of sucks, but it is what it is,” said Mars, who is competing in the DIRTcar Nationals by UNOH this season after a three-year absence. “Don did a helluva job out there. I came off the corner and I heard him out there, so I did all I could do to get to the top, but it just wasn’t there. I just had to let him go.” – Kevin Kovac

Notes: O'Neal's Moring Motorsports MasterSbilt Race Car is sponsored by Freeport Recycling Center and MDI Environmental Systems. ... The race was slowed by two cautions. Other than the late caution for Blankenship, the race was also slowed on lap six when Chub Frank came to a stop with a flat tire. ... The DIRTcar Nationals by UNOH continues Wednesday night with another 30-lap feature that pays $7,000 to the winner. Thursday night features the $10,000-to-win season opener for the World of Outlaws Late Model Series.

Jack Sullivan led every lap to win the third consolation race. Tim Fuller and Will Vaught battled hard for the second position for much of the race, with Fuller taking the spot and transferring to the feature. The race's first caution came on lap two when Danny Mitchell and Lee Thomason got together in turn four. The second caution appeared for a slowing Jill George on lap five.

Jason Feger led every lap for the victory in the caution-free second consolation race. Earl Pearson Jr. finished a distant second to also transfer to the feature.

Tyler Reddick dominated the first consolation race, leading every lap for the victory. Tommy Kerr survived an early challenge from Shane Clanton and held off a late charge by Steve Francis to claim second and transfer to the feature. The race's only caution appeared on lap 6 when Dennis Erb Jr. and Jon Henry tangled in turn two.

Chris Madden posted the fastest lap in time trials, but he had to give up his pole starting position for the sixth heat race due to a blown an engine. ... Austin Hubbard also suffered from engine woes. His came in hot laps, forcing him to scratch for the night.

Fast qualifier Chris Madden was a scratch for the sixth heat race and Kent Robinson, who inherited the pole, capitalized for the victory. John Mason ran second in a race that was slowed by one caution when Ricky Weiss spun while running third on lap five. That gave the final transfer position to Casey Roberts, who held off Ryan Unzicker at the finish.

Brady Smith led a top three that were all Bloomquist Race Cars for the win in the fifth heat race. Smith pulled to the lead over Scott Bloomquist on the start of the race, then pulled to comfortable lead early. But Bloomquist chased him down in the second half of the caution-free race and pulled to Smith's back bumper on the final lap. He couldn't make the pass and settled for second with Dan Schlieper taking the third and final transfer position. Schlieper's race car was trailing heavy smoke at the finish.

Jimmy Mars led every lap for the victory in the fourth heat race. After moving from fifth to second on lap one, Monday night's feature winner Billy Moyer chased Mars the entire distance, but had to settle for the runner-up finish. Tim McCreadie passed Jason Feger for third on lap two and finished in the final transfer position. The race was slowed by one caution when Dillan White spun with one lap complete.

Jimmy Owens led every lap after starting from the pole in the third heat race to the take the victory. Chub Frank ran a distant second with John Blankenship beating out Earl Pearson Jr. in a race-long battled for the third and final transfer position. A caution appeared on the race's first attempted start when Vic Coffey and Lee Davisier got together in turn two, sending Coffey to the pits.

Polesitter Don O'Neal moved to the lead on the start of the second heat race and pulled away to a convincing victory. Dale McDowell ran second after passing Brad Neat on the second lap. Josh Richards finished third after also passing Neat for the transfer position midway through the caution-free race.

Jonathan Davenport led every lap of the first heat race after starting from the pole. Pat Doar ran second in the caution-free race with Rick Eckert taking the third and final transfer position. Ron Davies chased Eckert for the transfer spot for most of the race, but came up short at the finish.