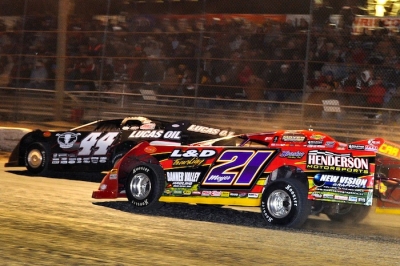 The 53-year-old Hall of Famer steered his Victory Circle by Moyer machine forward from the fifth starting spot to grab the lead from polesitter Chris Madden of Gray Court, S.C., on lap 13. He never looked back en route to a $7,000 payday, pulling away from the field after a lap-23 caution period to defeat Earl Pearson Jr. of Jacksonville, Fla., by 1.978 seconds. | Complete Speedweeks coverage

It marked the second time in the last four years that Moyer emerged victorious in the opener of the DIRTcar Nationals by UNOH. He also topped the DIRTcar UMP lidlifter in 2008 on his way to dominating that year’s action with three wins in five starts, including the week-ending World of Outlaws Late Model Series event.

“They got a good racy racetrack, big and wide,” Moyer said of the half-mile Volusia oval, where he’s won six times since 1998. “We like coming here for sure.”

Pearson, who won the UMP opener of the 2007 DIRTcar Nationals by UNOH, started from the outside pole and led laps 1-4 before briefly falling to third place. He regained second from Madden on lap 16 and closed within striking distance of Moyer before the race’s lone caution flag — on lap 23 for a flat left-rear tire on West Virginia driver Eddie Carrier Jr.’s car — extinguished his bid.

Madden, who led laps 5-12, lost touch with the leaders late in the distance and settled for a third-place finish. Vic Coffey of Caledonia, N.Y., advanced from the eighth starting spot to place fourth and 11th-starting Jimmy Mars of Menomonie, Wis., finished fifth after nipping Tim Fuller of Watertown, N.Y., by .039 of a second with a last-lap move.

Coming off a spectacular 2010 campaign that saw him sweep the prestigious $100,000-to-win Dream and World 100 events at Ohio’s Eldora Speedway, Moyer showed no signs of slowing down in ’11 with a masterful performance against a star-studded field of 71 cars. He calmly ran down Pearson and Madden, both former feature winners at Volusia, to seize control of the race.

“It was like ice out there, so slick,” Moyer, who has five 2011 victories in 10 feature starts. “I was just trying to take care of the car, the tires, everything on there, and was waiting for them (Pearson and Madden) to make a little bobble. They got to moving around on the racetrack a little bit and I had my old hot rod where it could stay on the bottom pretty good, and it worked out for us.”

Fuller finished sixth after starting third and running in the top five for the entire distance. Teenager Austin Hubbard of Seaford, Del., slipped from the fourth starting spot to a seventh-place finish, while two-time defending WoO LMS champion Josh Richards of Shinnston, W.Va., placed eighth, Brady Smith of Solon Springs, Wis., charged from the 20th starting spot to take ninth and Don O’Neal of Martinsville, Ind., rounded out the top 10.

Mike Marlar of Winfield, Tenn., registered the fastest overall qualifying lap at 16.477 seconds, but he ran into trouble in his heat race and didn’t transfer to the main event.

Notes: Moyer's Victory Circle Chassis is sponsored by L&D Trucking, Banner Valley Hauling, New Vision Graphics and Henderson Motorsports. ... Moyer is the first multiple winning during Georgia-Florida Speedweeks. ... He has at least one Speedweeks victory each season since first bringing a Victory Circle to the winter racing in 2008. ... Moyer hadn't driven the winning car since last October. ... Chub Frank won the first Bulrush Dash, a $300-to-win race for 15 drivers who failed to make the feature lineup. ... Sixth-place finisher Tim Fuller has been at all five Georgia-Florida Speedweeks tracks but hadn't raced in a feature event until Volusia's opener. ... Besides Fuller, five other drivers have entered events at every Speedweeks track: Pearson, Vic Coffey, Austin Hubbard, Steve Francis and Josh Richards. ... Scott Bloomquist and Brad Neat are among drivers expected to join that list with their first Volusia starts.

Wendell Wallace cleared polesitter Casey Roberts on the start of the third consolation race and led every lap for the victory. After losing the position on the start, Roberts chased Wallace the entire race. He pulled alongside Wallace a number of times, but faded late in the race. Roberts held on for the final transfer position.

Brady Smith led every lap of the caution-free second consolation race in a dominating performance. Smith won by nearly a straightaway over Jason Feger, who will also transfer to the feature.

Clint Smith passed polesitter Jared Landers midway through the first consolation race and pulled away in the closing laps to claim the victory. Landers faded near the end of the race as Will Vaught moved to challange for the position. Vaught beat Landers in a photo-finish to claim the final transfer position.

Chris Madden started from the pole and led every lap of the sixth heat race. Fourth-starting Billy Ogle Jr. ran second with John Blankenship finishing third to also transfer to the feature. The race ran caution-free.

Don O'Neal cleared Jimmy Mars for the lead on the second lap of the fifth heat race and ran away to the victory in the caution free race. Mars, making his 2011 Speedweeks debut, held on for second. Steve Francis finished in the third and final transfer position.

Austin Hubbard jumped to the lead from his pole-starting spot in the fourth heat and led every lap for the victory. Tyler Bruening ran second in the caution-free race, with Eddie Carrier Jr., finishing third to also transfer to the feature.

Earl Pearson Jr. passed polesitter Frank Heckenast Jr., on lap five of the third heat race and led the remaining laps for the victory. After nearly losing the second position to Rick Eckert, Heckenast roared back to challenge Pearson on the highside. But Pearson pulled away on the final lap, forcing Heckenast to settle for second. Eckert finished third.

Billy Moyer took the lead over polesitter Jared Landers on the first lap of the second heat race and led every lap of the caution-free race. Vic Coffey ran second with seventh-starting Dan Stone taking the third and final transfer position. Landers faded to fourth.

Tim Fuller passed Josh Richards for the lead in turn one on the final lap of the first heat race and held Richards off in a side-by-side finish. Richards moved from third to the lead on lap three when race-leader Mike Marlar and second-running Jonathan Davenport got together in turn four. He finished second ahead of Tim McCreadie in the third and final transfer position. The race's only caution appeared after just one lap when Ron Davies and Larry Wight tangled in turn one.

Note: Drivers will heat race with their qualifying groups. Lineups will be straight up according to lap times.
First group

Monday night’s race is the first of six events scheduled for the week at Volusia. The half-mile racetrack will host three $7,000-to-win UMP DIRTcar-sanctioned features Monday-Wednesday, followed by three $10,000-to-win features Thursday-Saturday. Thursday’s event is the season opener for the World of Outlaws Late Model Series while the Friday night feature is another UMP DIRTcar event. The Outlaws return for Saturday’s finale. ... Continuing a trend of high car counts at Speedweeks events, Volusia’s opening night has attracted 70 entries; it's the first time Volusia has drawn 70 entries since Feb. 10, 2009. ... There were at least five race cars in the pit area Monday afternoon that are not competing Monday night. ... Scott Bloomquist of Mooresburg, Tenn., is taking the night off after finishing second on a rough-and-tumble racing surface Sunday night at Ocala Speedway. ... The race car of 2010’s opening night winner Darrell Lanigan is in the Volusia pit area, but the driver is not. Lanigan of Union, Ky., was planning to compete Monday night, but feeling ill, he flew home Monday. He hopes to recuperate at home and fly back down to Volusia for Thursday night’s World of Outlaws opener. ... After only making one of six features last week at East Bay Raceway Park, Dillan White of Crofton, Ky., has benched his new Rayburn chassis and will drive a MasterSbilt at Volusia. ... After the body of her race car did not meet rule specifications Monday afternoon, Jill George of Cedar Falls, Iowa enlisted the help of Senoia, Ga., driver Clint Smith and Tony Knowles who is serving as a crew member for Smith at Volusia. ... While Clint Bowyer Motorsports teammates Dale McDowell and Jared Landers have been competing elsewhere during Speedweeks thus far, team owner Clint Bowyer has represented the team well at Volusia. The NASCAR Sprint Cut Series regular has won three UMP DIRTcar Modified features in the past week at the half-mile and will compete in Monday night’s Gator Championship.