Bouncing back after flat, O'Neal triumphs at Ocala 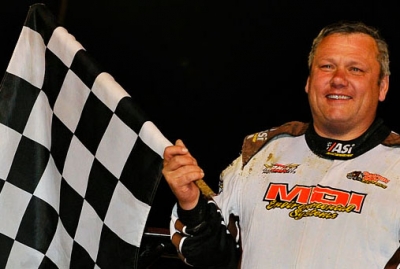 OCALA, Fla. (Feb. 13) – After suffering a flat tire while running fourth midway through Sunday’s Battle Between the Coasts at Ocala Speedway, Don O’Neal was in the right place at the right time when leader Austin Hubbard and second-running Josh Richards had flat tires with fewer than five laps remaining on a rugged racing surface. | Complete Speedweeks coverage

O’Neal, of Martinsville, Ind., had battled his way back to the third after changing the flat right-rear tire during a lap-29 caution, and inherited the lead upon the demise of Hubbard and Richards on the 46th lap of the 50-lapper. O’Neal held off Scott Bloomquist on three late restarts to claim an $8,000 victory in the UMP DIRTcar-sanctioned event.

“I didn’t see what happened,” O’Neal said of the nearly simultaneous flat tires for Hubbard and Richards. “I just seen stuff flying in every direction. I don’t know if they both blew tires or what happened, but things fell our way.”

Scheduled to start the race from the 10th position on an extremely rough racetrack, O’Neal was planning to pull in after just a few laps to save his Moring Motorsports entry for events scheduled the next six nights at Volusia Speedway Park. But a last-minute suggestion by crew chief Ronnie Stuckey changed O’Neal’s mind.

“I knew right off the bat we had a pretty good race car... I thought (the flat tire) put our chances out of reach, but we came back out and didn’t give up.”

Outside front-row starter Bub McCool of Vicksburg, Miss., pulled to the early lead, before Hubbard of Seaford, Del., and Richards of Shinnston, W.Va., chased him down in traffic. The three drivers began a heated battle as they raced high and low through the slower cars.

Hubbard pulled alongside McCool exiting turn four on lap 12 and completed the pass going down the front straightaway. But McCool charged back, diving under Hubbard entering turn one. The two drivers raced side-by-side down the back straightaway until Hubbard took the spot in turn three.

McCool and Richards continued to battle for second while never falling far behind Hubbard. The two drivers swapped the position a number of times before Richards pulled ahead just pass the halfway point.

“It was definitely crazy to say the least,” Richards said of the three-car battle. “We were coming through lapped cars, ya didn’t know where anybody was gonna go. It was just really crazy-hard racing. ... It was a good race for the fans, I’m sure.”

After taking second, Richards tried his best to chase down the leader. But the 19-year-old Hubbard was nearly flawless on the treacherous racetrack and seemed to be on his way to victory until the flat tire sent him spinning into the infield. Richards tire blew at nearly the same time as Hubbard’s, and both drivers’ chances of winning were over.

“We had a car to win. I think we had it in the bag and I kinda feel robbed right now,” a dejected Hubbard said after the race. “Congratulations to Don and his team. It was survival of the fittest, and apparently we weren’t the fittest tonight.”

McCool, who started outside the front row, also suffered a flat right-rear while running second to O'Neal with a single lap remaining. That handed the runner-up finish to Bloomquist, the Mooresburg, Tenn., driver who ran a conservative race, just hoping to make it to the finish.

“We were just trying to ride,” Bloomquist said of his plan for the race. “I figured there was going to be some attrition like that. We got down to the end there and I thought we might have a shot. It wasn’t the kind of race we wanted to run. ... You drive hard like that and things are gonna break.”

Notes: O'Neal's Moring Motorsports MasterSbilt Race Car is sponsored by Freeport Recycling Center and MDI Environmental Systems. ... O’Neal, who normally drives the MasterSbilt Race Cars house car, drives part-time for Forreston, Ill.-based Larry Moring. He won three UMP DIRTcar Summernationals victories in the car last summer. ... Just eight cars were running at the end of the race. ... Prior to the feature, officials adjusted the race format to count caution laps until lap 40. The adjustment was an attempt to limit the number of green-flag laps ran, but it didn’t make much of difference. There was just one caution in the first 40 laps and it only lasted for three laps. ... Ocala Speedway is scheduled to host a $10,000-to-win World of Outlaws Late Model Series race on March 25.

Due to rough track conditions, race officials have decided to count caution laps during the first 40 laps of the 50-lap Late Model feature. Drivers who pit under caution will not lose laps while in the pit area. ... Holes and ruts developed on the racing surface through the night’s Late Model heat races, causing the track to be extremely rough by the fourth heat race. John Lobb and Vic Coffey both had flat tires during that race. While he wasn’t completely sure, Lobb felt as though the rough track may have been to blame for his flat tire. “It’s definitely rough out there, and it probably had something to do with it,” Lobb said. “I think they’re making the right decision. What can you do? We all wanna run, but we don’t wanna tear our cars up.” Lobb transferred to the feature through a consolation race. ... Track crews attempted to pack the racetrack prior to the consolation races and it appeared to help conditions somewhat.

Only four cars made the call for the second consolation race. Ron Davies claimed the victory in the race that was shortned to six laps. John Lobb finished second with Rick Eckert third and Freddie Carpenter fourth. All four cars transfered to the feature.

Jason Feger jumped to the lead on the start of the first consolation race and led every lap for the victory. Brandon Sheppard finished second, while Tyler Ivey and Aaron Ridley finished third and fourth to also transfer to the feature.

Polesitter Josh Richards led every lap to win the fourth heat race. Boom Briggs finished second with John Garvin Jr. third. Larry Wight finished in the fourth and final transfer spot. Three drivers fell out of the race while running second. Home-state teenage driver Christian Augspurger ran second early in the race and challenged Richards for the lead before getting into the front stretch wall. John Lobb then ran second until heading to the pits with a flat right-rear tire. Vic Coffey was next to hold the second spot, but had a flat tire just after taking the white flag.

Austin Hubbard won the third heat race after passing Ryan Unzicker for the lead on the final lap. Hubbard won a battle between Tim Fuller for the early race lead, but lost the spot to Unzicker on a mid-race restart. Unzicker finished second with Fuller third. Casey Roberts claimed the fourth and final transfer position.

Bub McCool claimed the lead of the second heat when polesitter Don O'Neal got caught behind the slower car of Mike Hammerle in turn four. McCool led the remainder of the race for the victory while Scott Bloomquist also passed O'Neal for second. O'Neal finished third with Clint Smith taking the fourth and final transfer position.

Brad Neat won the first heat race after passing Shane Clanton for the lead on lap seven. Clanton inherited the lead early in the race when polesitter Jonathan Davenport had a flat left-rear tire and spun on the front straightaway. Clanton battled back after losing the top spot, but had to settle for the runner-up finish. Brian Reese finished third, while Davenport battled back from the tail to claim the fourth and final transfer position.

Richards recorded a lap of 15.014 seconds at the 3/8-mile racetrack and will start on the pole of one of four heat races coming up. Unofficially the other heat race polesitters are: Jonathan Davenport of Blairsville, Ga., Don O’Neal of Martinsville, Ind.; and Austin Hubbard of Seaford, Del.

Many drivers had trouble negotiating the oddly shaped racetrack. Brad Neat, Scott Bloomquist and Davenport all spun exiting turn four while coming to take the green flag for their respective qualifying laps. Freddie Carpenter got too high exiting the fourth corner on his warm-up lap and made contact with the wall.

Tonight's format will include group qualifying, followed by four heat races. The top four finishers in each heat will transfer to the feature, along with the top four finishers from each of two consolation races. ... Late Model qualifying was scheduled to begin at 6 p.m., but track crews reworked the racetrack after hot laps, pushing the schedule back slightly. ... Sunday night’s event is the first Speedweeks race at Ocala Speedway since a 1993 Hav-a-Tampa/Southern All Stars event that was won by Ronnie Johnson. The 3/8-mile D-shaped racetrack boasts that it is the oldest racetrack in Florida. It began operations in 1952 and after 45 years as a dirt track was paved for 10 seasons before returning to dirt in 2008. ... Drivers making their 2011 Speedweeks debut at Ocala include Ron Davies, Jon Henry, Jack Sullivan, Lee Devasier, Brandon Sheppard, Ryan Unzicker, Shane Clanton, John Garvin Jr., Russ King, Boom Briggs, and Larry Wight. ... Drivers at Ocala who entered Speedweeks events in Georgia that were rained out include: Tyler Ivey, Jonathan Davenport, Casey Roberts, John Lobb, Brian Reese and Clint Smith. ... Shane Clanton of Fayetteville, Ga., will debut a new Capital Race Cars chassis at Ocala. Clanton, who drove a Rocket chassis to victory at Talladega Short Track’s Ice Bowl XX in January, made an offseason switch to the new race car that was designed by fellow Georgian Marshall Green and himself. ... Larry Wight has competed in Speedweeks events before, but this is his first trip in a Dirt Late Model. The 18-year-old from Phoenix, N.Y., is a big-block modified ace who is planning to compete in Super Late Models full time in 2011. He tentatively plans to compete for the World of Outlaws Late Model Series Rookie of the Year. ... Jon Henry of Ada, Ohio was scheduled to race at Ocala Sunday, but broke an axle tube while unloading. ... Aaron Ridley is driving Justin Rattliff’s race car at Ocala. ... Don O'Neal, who drove his usual MasterSbilt Race Cars house car ride last week at East Bay, is piloting the Forreston, Ill.-based Moring Motorsports MasterSbilt at Ocala. O'Neal ripped off three UMP DIRTcar Summernationals victories in the car last summer.