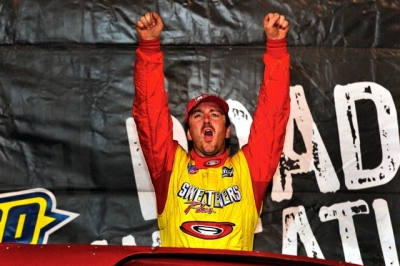 GIBSONTON, Fla. (Feb. 12) – After struggling for most of the week at East Bay Raceway Park’s 35th annual Dart Winternationals by Magnaflow, Tim McCreadie showed no signs of a struggle during the Saturday night finale. | Complete Speedweeks coverage

After taking the lead from the outside of the front row, McCreadie was able to pull away from the field on each of the race’s three restarts, but at times had trouble negotiating slower cars.

Heavy traffic slowed McCreadie late in the race, allowing Billy Moyer to challenge for the lead. Moyer pulled alongside McCreadie in the middle of turns one and two twice during the final five laps of the race, and seemed to be setting up for a late-race pass. But McCreadie turned back Moyer’s challenge and held on to claim the second Winternationals victory of his career.

“We held him off. He’s one of the toughest guys in the country to beat and we held him off,” McCreadie said of his race with Moyer. “I didn’t know who it was at first. ... I’m glad I didn’t know it was him cause I probably would have went in there and made a mistake.”

The victory capped off a week that saw McCreadie get better with the more races he ran. After finishing a dismal 20th in the Winternationals opener, he missed the feature in each of the next two events. But he showed signs of life in the second of two events Friday with an 18th-to-sixth run. He finished ninth in an afternoon race Saturday, before finally reaching victory lane Saturday night.

“We started out horrible and it just goes to show you that you just gotta stay at it,” McCreadie said of his week at East Bay. “We brought two new (race cars) and I was cussing them earlier in the week... It just shows you sometimes you gotta take a breath and figure things out. This car was pretty hot tonight.”

Moyer of Batesville, Ark., appeared to be as fast as McCreadie during some portions of the race and closed in on the leader multiple times. But McCreadie would move to the top groove each time and pull away.

"We just didn't quite have enough,” Moyer said after the race. “We were better than him on some parts of the track, and he was better than us on the other three-fourths of the track. I don't know. He did a good job. That little line he could run, I couldn't run there how he was rim-riding around there, and then he could cut down. His car was good. We gave it a shot, but we just came up (short)."

After skipping the first three Winternationals races, Moyer won the first race of a doubleheader on Friday. But like McCreadie he also had struggles. Moyer, who has won the most features in Winternationals history, failed to qualify for the feature in the two other events he entered, but closed out the week with a solid second-place run.

"We're happy with that,” Moyer said of the finish. “We've been throwing a few little things at this (car), so at least we feel better about it now. It's running like it's suppose to again."

Don O’Neal of Martinsville, Ind., started from the pole and ran second for much of the race. He was even alongside McCreadie for the lead on lap 13, and probably could have completed the pass, but his run was negated when a caution slowed the field.

O’Neal lost second to Moyer on the ensuing restart and ran third until he regained the position on lap 25. He chased McCreadie through the middle portions of the race, but again lost the second spot to Moyer on a lap-46 restart.
O’Neal closed in slightly on the leaders late in the race, but ran out of time. He finished third.

"I just struggled so bad (on restarts),” O’Neal said. “It took me like 15 laps it seemed like before I could get to rolling again. There at the end, I was rolling again, but they had gotten out on me too far."

Jason Feger closed Winternationals with a solid fourth-place run after setting fast time earlier in the night. The Bloomington, Ill., driver started eighth and ran in the bottom half of the top ten for much of the feature before charging into the top five late.

Notes: McCreadie's Rocket Chassis is powered by a Pro Power engine and is sponsored by Sweeteners Plus. ... McCreadie’s previous Winternationals victory came in 2005 and was his first major Super Late Model victory. ... The race was slowed by three cautions. The first appeared when Brian Birkhofer of Muscatine, Iowa slowed on lap 12. Chris Wall of Springfield, La., spun on lap 31 to bring out the second caution. The final caution was caused by a four-car pileup on lap 46 that involved Josh Richards of Shinnston, W.Va., and Scott Bloomquist of Mooresburg, Tenn. ... Unofficially, Bloomquist won the $5,000 Dart Winternationals points championship, beating O’Neal by five points. ... The six 2011 Winternationals features produced six different winners, making it just the second Winternationals event not to include a repeat winner. The only other year that no driver repeated was 2007.

John Blankenship ran away with the second consolation race, leaving Jason McBride and Donnie Moran to battle for the second and final transfer position. The high-running McBride held the position for most of the race, but the low-running Moran used a slidejob in the final corner to take the position at the finish. The race was slowed by one caution when Justin Rattliff slid high exiting turn two on the first lap and taged the wall. Rattliff turned sideways after the wall scrape and caught the side of Steve Francis's car, turning the two cars back into the wall. Neither driver was injured.

Frank Heckenast Jr. started on the pole and led every lap of the first consolation race. Tim Isenberg gave chase the entire race, but had to settle for second and a starting spot in the feature.

Mike Marlar took the lead over David Breazeale on the start of the fifth heat and pulled away to the victory. Breazeale ran second in the caution-free race, with Jared Landers finishing in the third and final transfer position.

Tim McCreadie moved to the lead on the start of the fourth heat and led every lap for the victory. Polesitter Jason Feger trailed McCreadie the whole race and finished second. Tim Dohm ran third for most of the of the race, but something broke on his car causing him to slow in turn four on the final lap. Fourth-running Dennis Erb Jr., squeezed by and took the final transfer position, but Ray Cook, Brent Robinson and Chirs Wall all got together with Dohm in a four-car pileup.

Jimmy Owens and Scott Bloomquist ran side-by-side for the first lap of the third heat race, with Owens taking control at the line. Bloomquist continued to challenge Owens for the position, but jumped the cushion getting into turn one on lap five. Owens ran the remaining distance unchallenged to claim the victory, while Eddie Carrier Jr. finishing second. Bloomquist fell back to fourth after his lap-five mistake, but battled back and passed Tim Isenberg on a late restart to take the third and final transfer position.

Billy Moyer led every lap of the second heat race to transfer to the feature for the first time since he won Friday's day race. Josh Richards trailed Moyer the entire distance and finished second. Bub McCool and Davey Johnson battled for the third and final transfer spot for the majority of the race, with McCool taking the position at the finish.

Don O'Neal took the lead on the start of the first heat race and led every lap for the victory. Fourth-starting Brian Birkhofer moved from fourth to second on lap one and after turning back an early challenge from Austin Hubbard, he took the runner-up finish. Hubbard finish third and will transfer to the feature.

Making the most of a racetrack that was getting faster late in time trials, Jason Feger went out near the end of the qualifying order and posted the fastest lap time of 61 entries for Saturday night’s Dart Winternationals by Magnaflow finale at East Bay Raceway Park.

Feger posted a lap of 14.254 seconds at the third-mile oval and will start on the pole of the fourth of six heat races coming up. Unofficially the other heat race polesitters are: Don O’Neal of Martinsville, Ind.; Billy Moyer of Batesville, Ark.; Jimmy Owens of Newport, Tenn.; David Breazeale of Four Corners, Miss.; and Dale McDowell of Chickamouga, Ga.

The Lucas Oil Late Model Dirt Series feature pays $12,000 to the winner. Thursday night’s rainout was made up earlier in the day with Jimmy Owens claiming his first East Bay victory.

Saturday is the consecutive doubleheader at the racetrack just outside of Tampa. Billy Moyer and Brad Neat split victories on Friday.