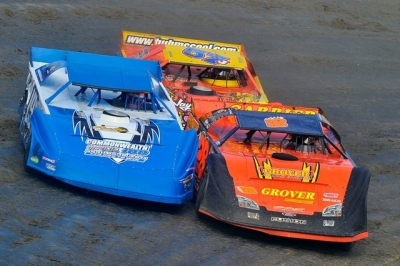 Owens, who had previously won at East Bay in both a Crate Late Model and a modified, has struggled at the Tampa-area racetrack in Super Late Model completion. But after scoring a pair of runner-up finishes earlier in the week, Owens finally visited victory lane on Friday.

“We’ve been so up and down here in the past, just kind of hit and miss,” Owens said of his history at East Bay. “We’ve been able to win in everything down here but a Super, and it feels really great to get our first Super win. We’ve been tuning and testing and trying a bunch of different setups. It worked good today.”

Hubbard, the 18-year-old Seaford, Del., driver, jumped out to the early lead, but the second-starting Owens was soon on his back bumper. Owens pressured Hubbard for the first seven laps of the race and made the pass for the lead on lap eight when Hubbard left the door open in the middle of turns three and four.

Owens quickly pulled to a comfortable lead and successfully negotiated slower traffic late in the race to become the fifth different winner in five Winternationals features.

While Owens checked out, Hubbard began to feel pressure from Eddie Carrier Jr. The Salt Rock, W.Va., driver looked under Hubbard a number of times, but could never complete the pass as the two raced through traffic.

Sixth-starting Bub McCool made a strong run late in the race using the track’s middle groove while nearly everyone else raced around the bottom.

The Vicksburg, Miss., driver passed Steve Francis and Dennis Erb Jr. on laps 20 and 21 to move to fourth, and immediately set his sights on Hubbard and Carrier. McCool tracked down the two drivers by lap 26, making it a three-car battle for second.

While Hubbard and Carrier ran nose-to-tail on the bottom, McCool repeatedly pulled alongside both drivers in turns one and two, but had trouble making the higher groove work at the other end of the racetrack. McCool finally cleared Carrier on lap 38 and then used the bottom groove to pass Hubbard on lap 39.

“We had a good car, just wasn’t much racetrack out there to be able to pass,” McCool said. “But we got by some right towards the end. We could roll up beside them through the middle of the corner, but it seemed like on the bottom was the place to be coming off. But we got a run there and ended up getting by.”

McCool pulled away to the runner-up finish leaving Hubbard, Carrier and the hard charging Dennis Erb Jr. to battle for third on the final lap. Hubbard held on for the position, while Carrier edged Erb for fourth in a photo finish.

The race was the first of a Saturday doubleheader at East Bay. The afternoon feature was originally scheduled for Thursday night but was postponed by rain.

Frank Heckenast Jr. charged from third to first on the opening lap of the second consolation race and led the remaining distance for the victory. Sixth-starting Don O'Neal made his way to second and closed the gap on Heckenast late in the race, but had to settled for the runner-up finish and a transfer to the feature.

Tim Isenberg started from the pole and led every lap to win the first consolation race. Scott Bloomquist charged from his seventh starting position and completed a high-side pass of Dale McDowell coming to the finish to claim the second and final transfer position.

Bub McCool stalked Josh Richards for the first four laps of the sixth heat race and made the pass coming to halfway point. McCool pulled away to the victory while Richards faded. Five-starting Tim McCreadie caught Richards in the closing laps and inched ahead of Richards in a photo-finish for the second. Richards transferred to the feature with his thrid-place finish.

Mike Marlar started on the pole and led every lap for the victory in the fifth heat race. Dennis Erb Jr. trailed Marlar the entire distance to finish second. John Blankenship passed Jason McBride on lap six for third and held off a strong final-lap challenge from Chad Valone to finish third and transfer to the feature. The race was slowed by three cautions, the first coming when Chad Hollenbeck spun in front of Leon Henderson entering turn one. With no where to go, Henderson made heavy contact with the wall, causing heavy damage to his race car.

Jimmy Owens lost the lead to David Breazeale on the second lap of heat four when he slid high entering turn two. But Owens battled back and passed Breazeale in turn four on the final lap to claim the victory. Breazeale finished second with Chris Wall finishing in the third and final transfer position.

Steve Francis made a high-side pass of polesitter Dale McDowell on the second lap of the third heat race and led the remainder of the race for the victory. Tim Dohm passed McDowell for second on lap three but a caution before the lap was completed gave McDowell the position back. Dohm used a slide job to take the position for good on lap four, also allowing Eric Jacobsen to slip by McDowell. McDowell battled back, but Jacobsen held on for the transfer position. The race's multiple cautions included a four-car pileup on lap three that was caused when Ricky Weiss and Christian Augspurger got together in turn three.

Eddie Carrier Jr. beat polesitter Tyler Reddick to the first corner on the start of the second heat race and led every lap for the victory. Reddick, winner of Wednesday night's feature, pressured Carrier for the first half of the race, but faded late. Brent Robinson passed Reddick on a lap-five restart and finished second to qualify for his first feature of the week. Ray Cook also passed Reddick to claim the third and final transfer spot.

The first half of the first heat race produced some of the most exciting moments of the 2011 Winternationals thus far. Front-row starters Austin Hubbard and Scott Bloomquist battled side-by-side for the first two laps of the race, then swapped the lead multiple times throughout the next three laps. The battle came to an end when Hubbard dove under Bloomquist entering turn one on lap five and used some contact to reclaim the lead. Bloomquist lost control and spun exiting the corner. Hubbard led the remaining five laps to claim the victory. Brad Neat drove his backup car to a second-place finish, while Billy Moyer Jr. passed Tim Isenberg on the final lap to earn the final transfer position.

Dan Stone’s qualifying time of 14.905 seconds was fast enough to earn the pole for a heat race, but because the Thompson, Pa., driver wasn’t in line to go out at his scheduled time, he’ll have to start fourth in a heat race. Lucas Oil Late Model Dirt Series rules allow for a driver who misses his spot in the qualifying order to still make a lap at the end of qualifying, but the driver can start the heat no better than one spot behind the transfer positions. ... Brad Neat of Dunnville, Ky., also missed his turn in time trails. Neat, who won Friday night’s feature, had mechanical problems on his primary car in hot laps and had to go to a backup car for qualifying. Taking the track in the car for the first time at the end of the qualifying order, Neat’s lap of 15.075 seconds was eighth fastest in his group. The time would have earned Neat the third starting position in a heat race, but like Stone, he’ll have to start fourth. ... Crews reworked the track after time trials in attempts provide a better racing surface.

GIBSONTON, Fla. (Feb. 12) – Austin Hubbard mastered a dry day-time track surface during time trials for Saturday afternoon’s Dart Winternationals by Magnaflow at East Bay Raceway Park. The 18-year-old driver from Seaford, Del., posted the best lap time of 60 entries for the event that is a makeup of Thursday’s rainout.

Hubbard turned a lap of 14.525 seconds at the third-mile oval. He'll start on the pole of the first of six heat races coming up. Unofficially the other heat race polesitters are: Tyler Reddick of Corning, Ca.; Dale McDowell of Chickamauga, Ga.; Jimmy Owens of Newport, Tenn.; Mike Marlar of Winfield, Tenn.; and Josh Richards of Shinnston, W.Va.

Saturday is the consecutive doubleheader at the racetrack just outside of Tampa. Billy Moyer and Brad Neat split victories on Friday. Moyer’s $5,000 victory was a makeup of Monday’s rainout. The events mark the first time in Winternationals history that four complete events will run in a 36-hour stretch.

Due to today's busy schedule at the track, there will be no Speedweeks Minute this morning. However, tonight's video coverage will include heat race video. ... Bob Geiger was scheduled to be the first car out for time trials, but didn't make the call. Jim O'Hara also missed time trials. ... Christian Augspurger of Palm Beach Gardens, Fla. is the only new entry for today's race.