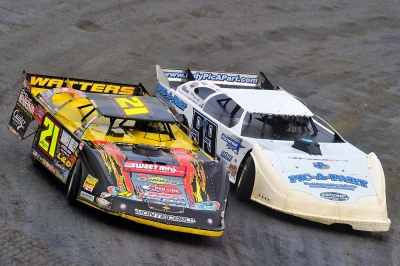 Moyer of Batesville, Ark., led every lap of the 30-lap, $5,000-to-win feature for his 21st victory in the early-season miniseries.

“Everything worked out just right for us,” said Moyer, who started from the pole after turning the fastest lap in time trials and winning his heat race. “You never know what the track’s gonna do, but it turned out just right for us. The track was pretty darn good qualifying-wise for everybody. We had the car nice where it needed to be and just kept tweaking on it for what we thought the track was doing.”

Don O’Neal of Martinsville, Ind., moved around Frank Heckenast Jr. of Frankfort, Ill., for second with five laps remaining. A caution one lap later gave O’Neal a shot at Moyer, but the Hall of Famer pulled away in the run to the finish.

After losing the second position to O’Neal, Heckenast, a Lucas Oil Series rookie contender, faded to 17th in the race's final five laps and finished a lap down. Donnie Moran of Dresden, Ohio, ran third for the majority of the race, but fell out with a flat right-rear tire on lap 19.

Wendell Wallace moved to the lead on the start of the second consolation race and led every lap for victory. Polesitter D.J. Wells and fifth-starting Jared Hawkins battled for second for the majority of the race with Hawkins finally taking the position on the final lap. Wells finished third in a race that was slowed by multiple cautions.

Billy Moyer Jr. moved from fourth to first on the lap one of the first consolation race and led every lap for the victory. Polesitter Chad Valone challenged for the lead late in the race but settled for the runner-up finish. Dan Schlieper moved by Steve Francis on a lap-nine restart and finished in the third and final transfer position. Second-starting Brandon Thirlby was running third early in the race, but spun with five laps complete. Leon Henderson was collected in the wreck. Jim O'Hara brought out the race's only other caution when he spun on lap nine. David Breazeale scratched but is in line for a qualifying provisional.

Austin Hubbard led every lap for a convincing victory in the sixth heat race. Polesitter Eric Wells ran a distant second with Earl Pearson Jr. claiming the third and final transfer position. Third-starting Chad Stapleton got into the front stretch wall bring out the race’s only caution with three laps complete. Stapleton's right-rear wheel came off and rolled into his car.

Eddie Carrier Jr. passed polesitter Eric Jacobsen on lap two and led the race's remaining laps for the victory. Jacobsen attempted to battle back, but spun on lap five between turns three and four. Fellow West Virginia driver Tim Dohm challenged Carrier midway through the race, but faded in the closing laps. Dohm held on for the runner-up finish, with Dillian White finishing third to transfer to the feature for the first time this week.

Fourth-starting Donnie Moran overtook Josh Richards on the eigth lap and led the final two laps to win the third heat. Richards claimed the runner-up finish ahead of Bub McCool in the final transfer position.

Billy Moyer led every lap of the first heat race to take the victory ahead of Scott Bloomquist. Brian Birkhofer held off Chad Valone for the third and final transfer position.

Moyer, a 20-time winner at East Bay, posted a lap of 14.609 seconds at the third-mile oval. He'll start on the pole of the first of six heat races coming up. Unofficially the other heat race polesitters: Don O'Neal of Martinsville, Ind.; Bub McCool of Vicksburg, Miss.; Mike Marlar of Winfield, Tenn.; Eric Jacobsen of Seacliff Beach, Calif.; and Marlar's teammate, Eric Wells of Hazard, Ky.

Because of Thursday's rainout, East Bay has also scheduled a doubleheader for Saturday with the opener paying $10,000-to-win and nightcap paying $12,000 to the winner. It marks the first time in Winternationals history that four complete events will run in a 36-hour stretch.

To speed up the afternoon program, officials have cut the Strawberry Dash, and qualifiers will take a single lap instead of the customary two. ... Drivers making their first starts of 2011 at East Bay are Davey Johnson of Latrobe, Pa. (in a No. 47 Rocket owned by his younger brother Mike); Billy Moyer of Batesville, Ark. (the winningest career Winternationals driver whose No. 21 is sporting neon yellow numbers); and Brian Birkhofer of Muscatine, Iowa (driving as a teammate to West Virginia driver John Blankenship in a MasterSbilt Race Car). ... Johnson had problems in hot laps and was towed off the track; he didn't appear for time trials. ... A handful of drivers in the pits are skipping the non-points event in favor of the evening's points race. Among those sitting out is Tyler Reddick of Corning, Calif., the 15-year-old winner of Wednesday's main event. ... Dennis Erb Jr. of Carpentersville, Ill., has unloaded his new Bloomquist Race Car after piloting his Rayburn Race Car in the opening two events; Erb is a two-time Winternationals champion. ... Former Dirt Track World Champion Jimmy Mars of Menomonie, Wis., has spent the week helping out fellow Wisconsin driver Tim Isenberg, who drives an MB2 Customs chassis built by Mars Race Cars. ... Trying to avoid Duane Harbaugh in hot laps, Ray Cook spun in turn three, damaging his car's left-front wheel; his car headed for the pits under its own power. ... Last year's series runner-up Jimmy Owens was on the time-trial list but elected not to compete. ... Michael Chilton, whose car pulled up lame on the backstretch in hot laps, brought out his other car for time trials.