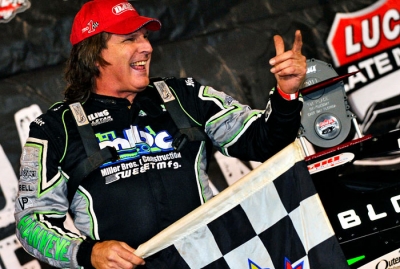 The Hall of Fame driver from Mooresburg, Tenn., moved by polesitter Jimmy Owens on lap nine of the opening feature of the Dart Winternationals by Magnaflow on Tuesday night at East Bay Raceway Park and led the remainder of the 30-lap race for a $5,000 victory. | Complete Speedweeks coverage

The dominant performance continues Bloomquist’s resurgence at East Bay, a track where he went winless for 17 years. After winning in two of four starts at last year's Winternationals, Bloomquist’s victory Tuesday gives him three wins in his past five races at the third-mile oval.

“When your car’s not handling here, it’s a place to hate,” Bloomquist said in victory lane. “We’ve finally got it figured out pretty good. You see guys down here and it just looks effortless for them, and you see guys who are just having a heck of a time. I used to be the guy having the heck of a time. It's really sweet to be able to get a handle on this place.”

Owens of Newport, Tenn., jumped to the lead over Ray Cook of Brasstown, N.C., on the start of the race, but soon David Breazeale of Four Corners, Miss., and Bloomquist made it a three-car battle for the lead.

Breazeale and Bloomquist battled side-by-side after a lap-five restart. Bloomquist cleared Breazeale on lap eight and powered by Owens for the lead one lap later when Owens slipped up just a little in turns one and two.

“I seen him occasionally have a push problem and he couldn’t quite get aggressive on the top,” Bloomquist said of Owens. “He just messed up a little bit that one time and that was it.”

Bloomquist ran the remainder of the race unchallenged, pulling to nearly a straightaway advantage during the second half of the race. Breazeale challenged Owens for second throughout the race’s middle stages, but faded late.

Austin Hubbard of Seaford, Del., moved by Breazeale for third after the race's final restart on lap 27 and finished third behind Owens. Breazeale held on for fourth with 11th-starting Eddie Carrier Jr. of Salt Rock, W.Va., rounding out the top five.

The runner-up finish is a positive sign for Owens, who has struggled at East Bay over the past few years. While he would have liked to have won the race, he hopes the opening night run signals a turnaround for him at the tricky racetrack.

“This place has been tough on us, so it’s good to start the week with a decent finish,” Owens said. “Obviously we wanted to win tonight, but Scott just had a better car.”

After starting from the fifth position, Hubbard faded back in the field in the race’s opening laps before making his strong run back toward the front. He looked fast enough to possibly challenge Owens for second, but ran out time after he got to third.

“Our car was really good on the short runs, so the second half of the race kind of played into our favor,” said Hubbard, whose team swapped motors after his heat race. “I don’t know if I had anything for Scott or Jimmy, but it was feeling pretty quick there at the finish.”

Notes: Bloomquist’s self-designed chassis has a Roush-Yates engine with sponsorship from Miller Bros. Construction, Hawkeye Trucking, Hoosier Tires and Allstar Performance. ... The race was slowed by six cautions. The first came on lap five when D.J. Wells slowed on the front straightaway, causing a four-car pileup that included Wendell Wallace, Frank Heckenast Jr., and Jared Hawkins. ... Eric Jacobsen had advanced from 17th to fifth in just 10 laps, but spun in turn one to bring out the second caution of the race. He recovered to finish eighth after restarting on the tail of the field. The effort earned him the race's hard charger award. ... The Winternationals was originally scheduled to start on Monday night, but the race was postponed due to inclement weather. The six-race miniseries resumes Wednesday night with another 30-lap, $5,000-to-win event.

Blog-style reports of the night's preliminaries:

Austin Hubbard raced to victory in the fifth heat, and now his team is racing to change powerplants in his Dale Beitler-owned car before the main event. Beitler's crew along with the Rocket Chassis house car team thrashed to switch from a 454 c.i. powerplant to a 430. "It was running real rough, but the car was good," said the young Delaware driver. He's scheduled to started fifth in the main event. ... Ray Cook, scheduled to start outside the front row in the main event, had to change his scoring transponder at the request of series officials. "Is that faster than the one I had," Cook joked when an official gave him a replacement, which is placed on the frame near the left-front wheel. ... Polesitter Jimmy Owens of Newport, Tenn., will be gunning for his first Super Late Model feature at East Bay. "The car could be better, but we're all right," Owens said before heading to the track to watch a consolation race. ... Dan Stone's Winternationals might have come to an end when he broke his backup engine in his heat race. Stone's primary engine was already disabled before coming to Florida when it wouldn't turn over — and he found that a mouse in the shop had stuffed birdseed into the motor that ran down into the cylinder. The Thompson, Pa., driver hopes to borrow a motor or get something from Cornett Racing Engines to compete later in the week. ... Frank Heckenast Jr., who struggled mightily with his car's handling after starting on the pole of a heat race, received the Dart Fast Pass provisional starting spot as the fastest qualifier not transferring to the main event through prelims.

Jared Hawkins started from the pole and led every lap of the caution-free Strawberry Sash to earn the final starting position in the feature. Donnie Moran closed in on Hawkins late in the race after starting third, but didn't have enough to make the pass.

Tim McCreadie outran Josh Richards to turn one on the start of the race and led every lap for the victory. Richards trailed McCreadie the entire distance to finish second with Tim Isenberg taking the final transfer position. Justin Rattliff finished fourth with Jared Hawkins finishing fifth. Chris Wall started in the top five, but went hard into the turn one wall on lap two, collecting David Scott.

Jared Landers jumped to the lead on the start of the race, but slid high on the first lap in turns three and four, giving the lead to Tim Dohm, who started from the pole. Dohm led every lap for the victory. Dale McDowell passed Landers for second on a lap-three restart and held the position until the finish. Landers survived a four-car battle for the third and final transfer position ahead of Rick Eckert and Brent Robinson. Duane Harbaugh brought out the races only caution when he spun on lap three.

Steve Francis jumped to the lead from his second starting position and led every lap to win the caution free race. Pole-starting D.J. Wells held off Dan Schlieper for the second-place finish. Schlieper finished in the third and final transfer position ahead of Tim Isenberg and Jared Hawkins.

Polesitter Scott Bloomquist beat fellow front-row starter Earl Pearson Jr. into turn one and cruised to victory in the fifth heat. Pearson couldn't keep up in finishing second while fourth-starting Wendell Wallace got the third and final transfer spot after fighting off sixth-starting Tim McCreadie most of the way. A caution appeared on the second lap when Dillan White got sideways in turn one, causing third-starting Bobby Pierce to spin. The first start was called back after a scramble at the flagstand that Terry Casey got the worst of, collecting Jim O'Hara's car. O'Hara was able to continue while Casey's Scott Clippinger Racing entry was towed away with significant damage.

Outside front-row starter Ray Cook cleared Brad Neat in turn two on the first lap and led the entire distance for a victory. Neat trailed Cook the entire distance and finished second, while Billy Moyer Jr. held off Josh Richards for third to transfer into the feature in his first Winternationals appearance. Chris Wall finished fifth. Bob Geiger brought out the race’s first caution on lap five when he slowed in the middle of turns three and four. He brought out the race’s second and final caution the very next lap when he crashed hard into wall in the same location.

Polesitter Austin Hubbard raced to a 10-lap victory, holding off occasional challenges from fourth-starting Eddie Carrier Jr.. Eric Jacobsen, who started fifth, got the third and final transfer spot. The first of two cautions appeared on the first lap when outside front-row starter Bub McCool got sideways in turn four, nearly lost control and banged into Chad Valone's car. Ricky Weiss ended up spinning in the aftermath. The second caution appeared on lap five when Valone's right-rear — no doubt damaged in the collision with McCool — blew exiting turn four.

David Breazeale beat polesitter Frank Heckenast Jr. to turn one on the start of the second heat and led every lap for the victory. Breazeale survived near disaster when the lapped car of Chad Hollenbeck nearly spun in front of him midway through the race. Jason Feger pressured Breazeale the entire distance, but settled for the runner-up finish. Don O'Neal ran third the entire race for the final transfer position after a near-miss with polesitter Frank Heckenast Jr. in turn one on the ifrst lap. Jared Landers finished fourth, while Rick Eckert passed Heckenast on the final lap for fifth. Heckenast struggled with the handle on his car throughout.

Winning a green-flag duel with his long-time modified racing buddy Mike Marlar, polesitter Jimmy Owens took off and cruised to victory in the opening Winternational heat. Marlar fell nearly a half-straightaway back after three laps, all the while holding off Dennis Erb Jr., who got the third and final transfer spot. Marlar's teammate Eric Wells ran fourth until the ninth lap when his car went up in smoke on the backstretch to draw the race's lone caution. Tim Dohm's last-lap slide job gave him the fourth spot over Chad Stapleton.

“I knew the track was getting faster and faster, and it showed,” Neat said. “We’ve always struggled here at this racetrack, but as long as everything keeps going our way we’ll be all right.”

The Winternationals were originally scheduled to open Monday, but a late afternoon storm washed away those chances. That $5,000-to-win event is scheduled to be made up with a Friday or Saturday doubleheader; that decision will be made Thursday afternoon.

Despite Monday's rain, track conditions are relatively dry after a breezy afternoon. Plenty of dust kicked up as the first hot-lap group hit the track. ... The 64 entrants will be split in half for group qualifying. The first group of qualifiers will make up the first three heat race lineups with the fastest starting on the pole of the first heat; the second group of qualifiers will make up the fourth, fifth and sixth heat race lineups. ... Donnie Moran Racing is providing a spoiler kit to the runner-up in each night's Strawberry Dash. ... There will be no Lucas Oil Series provisional starters in the first three Winternationals events. ... Drivers competing with the Lucas Oil Series for the first time since the series last fall instituted a rule requiring drivers to wear a head and neck restraint system last season have been given a three-race grace period to comply with the rule. ... Leon Henderson hit the wall in hot laps and didn't appear for time trials. ... Track work following qualifying delayed the heat races from a 7 p.m. start until about 7:50 p.m. ... A reminder to DirtonDirt.com subscribers: Because of restrictions regarding the track's pay-per-view netcast, there won't be heat race video. Feature highlights and postrace interviews will be posted overnight.