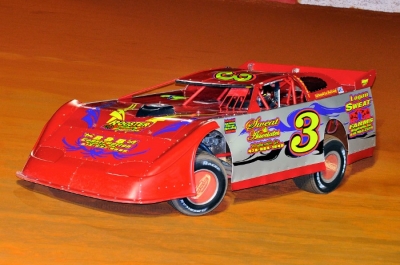 The event, featuring $10,000-to-win events for unsanctioned Super Late Models and the O'Reilly All Star Circuit of Champions sprint cars, was rescheduled for Wednesday, Nov. 2. The makeup precedes the World Finals on Nov. 3-5 at Charlotte (N.C.) Motor Speedway, an event that includes sprint cars and Late Models at the track about 225 miles north of Screven. | Complete Speedweeks coverage

Because the 24-car field wasn't set, Thursday's Super Late Model preliminaries will be scrapped and the entire event will start from scratch Nov. 2. The sprint car feature is set and another sprint car program will be added to the program. Rain checks from Thursday's race can be used at any event during the season at Screven.

Blog-style reports of the night's racing below:

A steady drizzle began during the sprint car dash, and afterwards, the drivers from the two Late Model consolation races tried to keep the track surface dry for nearly 10 minutes before officials sent them to the pits. Officials then called all the track-packing vehicles to the racing surface during the delay. The radar looks ominous but the rain has been light so far.

Polesitter Austin Hubbard moved to the lead on the start of the race and led every lap. Fifth-starting Vic Coffey finished second ahead of Bub McCool, who ran second early in the race. John Henderson finished fourth with Steve Shaver in the fifth and final transfer spot. After starting second, Casey Barrow fell back on the first lap and spun, collecting Grant Grotyohann. Both drivers retired.

After spinning in front of the field on the first start, polesitter Brad Neat was given a second chance on a complete restart. He made the most of it, leading every lap for the victory. Teammates Tim McCreadie and Tim Fuller raced side-by-side for the second position for nearly the entire race, with the low-running McCreadie taking the spot at the finish. Fuller finished third ahead of John Lobb and Derek Ellis.

Pole-starting Billy Ogle Jr. slid high on the initial start giving the lead to second-starting Casey Roberts. The home-state driver led every lap for the victory. Ogle finished second, while Tommy Kerr and Clint Smith battled for third for the majority of the race. After spinning on his own on lap two, Steve Francis battled his way back from the tail to make it a three-car battle for third in the final two laps. Smith passed Kerr coming to the finsih while Kerr held off Francis for fourth in a photo finish.

Outside-pole starting Josh Richards jumped to the lead over Chesley Dixon on the start of 10-lap race and led every lap for the win. Chesley finished second ahead of Ray Cook in third and Earl Pearson Jr. in fourth. Brian Reese passed Monk Gulledge for the fifth and final transfer position on the final lap. The race was slowed by one caution on the initial start when Cook, Gulledge and Ken Schrader got together in turn one, knocking Schrader out of the race.

Chesley Dixon of Swainsboro, a big winner last year at Screven Motor Speedway, put himself in position for another one Thursday by setting fast time at the inaugural Winter Freeze. Dixon, a Southern All Star winner last year at Screven, posted a lap of 14.058 seconds on the 3/8-mile oval to earn the pole position for the first of four heat races on a chilly night in south Georgia. The night's 50-lap feature pays $10,000 to the winner.

Drivers, crew members and fans turned out despite a gloomy forecast and chilly weather at the 3/8-mile oval, which is hosting its first Speedweeks event. .... After two laps of time trials for each car, four heat races will transfer five drivers apiece to the main event. Two consolation races will send two drivers apiece to the 24-car feature field. ... The event drew 32 drivers from 12 states. ... "It's pretty good considering the weather," race director Kelley Carlton told drivers at the pre-race meeting. ... Rain hit much of central Georgia throughout the day but pushed north of the track most of the afternoon and evening; late-night forecasts call for a significant chance of rain. ... The O'Reilly All Star Circuit of Champions sprint cars are also in action for a $10,000-to-win event with 24 drivers entered. ... Carlton, who is also directing this weekend's Super Bowl of Racing VII events at Golden Isles Speedway, told drivers at the pre-race meeting about alternate plans in case forecasted rain hits the track near Brunswick, Ga., which is scheduled to host $10,000-to-win events on Friday and Saturday. If rain prevents Friday racing, track owner Frankie Lloyd is considering running both events on Saturday. A rain schedule may also include Sunday racing if necessary, Carlton said. ... Super Late Model rookie Brian Reese is in a brand-new backup car Thursday after having radiator problems in Wednesday's practice. ... Steve Francis is driving a Chad Stapleton-owned car; Stapleton is also in action. ... Billy Ogle Jr. is driving as a teammate to fellow Tennessee driver Tommy Kerr in a Blount Motorsports entry.