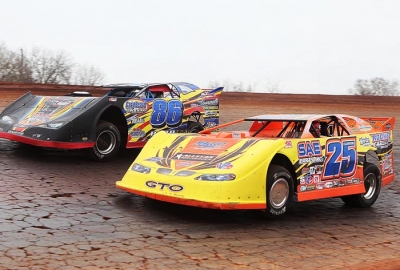 EASTABOGA, Ala. (Jan. 9) – Making 50 laps glued tight to the bottom of Talladega Short Track may sound like an easy task. But with heavy lapped traffic blocking the way and a hard-charging, second-year driver breathing down his neck, the Ice Bowl XX feature was more than just a Sunday drive for polesitter Shane Clanton.

Clanton of Fayetteville, Ga., led every lap of the caution-free race Sunday afternoon to become the only three-time winner of the unsanctioned event. The World of Outlaws Late Model Series regular held off hometown driver Dillon Crim to earn the $6,000 winner’s check.

Clanton, who previously won the Ice Bowl in 2003 and 2005, dominated most of the weekend, turning the fastest time in qualifying and winning his heat race Saturday to earn the pole. After the race, Clanton noted that hard work over the offseason and some key adjustments during Friday’s practice session gave his Rocket race car the setup it needed to win the race.

“It feels real good,” Clanton said of the victory. “Me and Gary Winger with GW Performance, we worked on some stuff this past week and really picked this race car up I think. We put it on Friday afternoon late for the second practice and the car was good. … We’ve worked on the shocks the past two weeks. We worked day-in-day-out and worked our butts off trying to get a package under my race car. I’ve tried many years to get that third (Ice Bowl) win and I’m glad we finally prevailed this year.”

After passing second-starting Neil Baggett on the start of the race, Crim trailed Clanton the entire distance, never falling more than a couple car lengths behind Clanton’s rear bumper. The 17-year-old driver had plenty of opportunities to turn Clanton as the two drivers spent all but 10 of the race’s 50 laps running nose-to-tail in heavy lapped traffic.

Crim appeared to be faster than Clanton through turns one and two and peaked his nose under Clanton a number of times off the corner. But Clanton pulled ahead each time down the back straightaway, never giving Crim enough room to challenge entering turn three.

“It’s a little frustrating knowing I had a lot better car than he had,” Crim said. “I had a lot more through the corner than he had. I shoved him down the straightaway once or twice. I could have got him there. I could have done him dirty, but we don’t race like that. We try to run everybody clean. It was just one of them deals, just ride around the bottom.”

Even with the lesser experienced Crim on his bumper, Clanton said he never worried the young driver would make a mistake and take the two leaders out.

“I heard him one time about halfway through the race and I said I’ve got to pick the pace up a little bit more and more and more,” Clanton said. “When you get up to Late Model and this caliber racing, generally you don’t make dumb mistakes. But yeah, if he got in there a little too hard it could have took both of us out. I’m glad he prevailed and kept his head cool and rode second.”

Crim didn’t looking anything like a driver who just finished his rookie Late Model season. Never pushing the issue too hard, he patiently rode behind Clanton the entire race waiting for an opportunity to pass. But that opportunity never came and Crim settled for the runner-up finish.

“We were a lot faster than Shane. I was getting through the corner a lot better than he was,” Crim said. “I think we had a little better tire than he had. We’ll take second any day to Shane Clanton, he’s one of the best in the country.”

The only legitimate chance Crim had to pull alongside Clanton near the race’s halfway point. While attempting to pass the slower car of James Cline in turn four, Clanton’s right-front tire climbed on top of Cline’s left rear. The incident left just enough room for Crim to look underneath Clanton exiting the corner, but Clanton pulled back ahead before the two drivers reached the other end of the race track.

“I thought I could get to his door and show him and he’d get out of the way, but I didn’t get far enough and I climbed his left-rear tire,” Clanton said of the incident. “I was trying to be as easy as I possibly could, but I wasn’t easy enough I don’t guess.”

Baggett started alongside Clanton and gave everything he had in an attempt to clear Clanton on the start. The two front-row starters raced side-by-side into turn one and Baggett even nosed ahead exiting the second turn, but there just wasn’t enough on the topside and Clanton cleared Baggett before completing the first lap. The bold attempt allowed Crim to pass Baggett and the Shannon, Miss., driver fell back to third, where he ran the entire race.