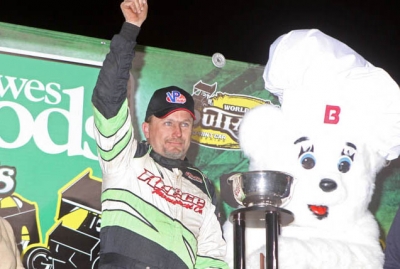 CONCORD, N.C. (Nov. 6) — Jimmy Owens closed the Lowes Foods World of Outlaws World Finals Presented by Bimbo Bakeries and Tom’s Snacks with a victory for the second consecutive year on Saturday night at The Dirt Track at Charlotte.

And for the second year in a row, the standout racer from Newport, Tenn., shared the postrace spotlight with Josh Richards of Shinnston, W.Va., who secured his second straight World of Outlaws Late Model Series championship with a fourth-place finish in the evening’s 50-lapper. | Complete World Finals coverage

Owens, 38, took note of the similar circumstances after rolling to a $10,000 triumph in front of a chilled sell-out crowd of over 14,000 and a national television audience on Speed. He marched forward from the sixth starting spot to take the lead for good on lap 18 with a inside pass of Blairsville, Ga.’s Jonathan Davenport, who was bidding for an unprecedented clean sweep of the Lowes Foods World Finals after winning Friday’s postponed 40-lapper held Saturday afternoon.

“It’s kind of like deja vu,” Owens said after his second WoO victory of 2010 and the fourth of his career. “Every time we win here, Josh wins something big here. He’s probably glad to see us win.”

Richards, 22, captured the weekend’s most important prize, outdueling Darrell Lanigan of Union, Ky., who made a furious charge from the 21st starting spot to finish third, in a dramatic season finale. The young sensation defeated his friendly rival by four points — merely two finishing positions — to collect a $100,000 champion’s check and become the first repeat titlist of the national tour’s modern era (2004-present).

“To come out on top again and become the first back-to-back champion, words can’t really describe it,” said Richards, who started seventh and briefly peaked at second place following a lap-26 restart. “This means the world to me, all my family, my sponsors and my crew. It’s gonna take a little bit to settle in.”

Richards engaged in a down-to-the-wire thriller for the points crown with Lanigan, the 2008 champion who entered the World Finals trailing Richards by 22 points and put himself in a hole with poor qualifying times in both rounds of Thursday’s time trials. Lanigan came back strong on Saturday, however, finishing fourth — while Richards had a quiet 12th-place run — in the matinee event to pull within six points entering the nightcap.

Lanigan, 40, was relegated to the 21st starting spot in Saturday night’s race after winning a consolation race, but he tore through the field in his self-owned Rocket mount. He landed in fifth place behind Richards on lap 24 when he picked up several spots by escaping a scramble between turns three and four surrounding the spinning car of Carpentersville, Ill.’s Dennis Erb Jr., who lost control of his machine while battling for sixth place with Rick Eckert of York, Pa.

Shortly thereafter, on lap 32, Lanigan overtook Richards for third and immediately began to pressure Davenport for second. Lanigan knew he needed to beat Richards by at least four positions — or two if he was able to win the race — in order to steal the championship, but he was unable to climb higher while Richards calmly held the fourth spot to the checkered flag.

Lanigan crossed the finish line in third just over one second behind Davenport, who settled for second placeï¿½ after leading laps 15-17 in the Barry Wright house car. Richards was a half-second behind Lanigan in fourth and Tim McCreadie of Watertown, N.Y., advanced from the 25th starting spot to finish fifth and cap a season that saw him place third in the WoO standings.

“I still feeling like I’m trying to run away from that 29 car (of Lanigan),” a relieved Richards said after climbing from his father Mark’s Kentucky Fuel Corporation Rocket No. 1 and lifting the WoO championship trophy in victory lane. “Darrell definitely made it tough this year. We went right down to the last lap and it came down to four points.

“Hat’s off to Darrell and his guys. They did a heckuva job this year and deserve to be up here as much we do.”

Owens also held his high after reaching the winner’s circle with his Reece Monuments Team Zero by Bloomquist car. He improved from an eighth-place finish in the afternoon race.

“We were OK the first race, but we were just a little bit freer than we needed to be,” said Owens. “We came back (to the pits) and pretty much put last year’s setup on the car and it was good. I really felt my car getting better and better as the race went on. The harder we ran, the better it was.”

Preventing Davenport’s sweep of the Lowes Food World Finals — the 27-year-old driver also set fast time in both ends of Thursday’s qualifying session and won his two heat races — left Owens with a dose of satisfaction.

“He’s been pretty tough this weekend, so it feels good to beat him,” Owens said of Davenport. “We’re probably about the only one who passed him today. I’m kind of proud of that.”

Six caution flags slowed the event, all coming between laps 23 and 29. There were no serious incidents.

The 2010 WoO campaign will be celebrated — and nearly $400,000 in points-fund cash will be distributed — Sunday evening during the tour’s awards banquet at the Great Wolf Lodge in Concord, N.C.