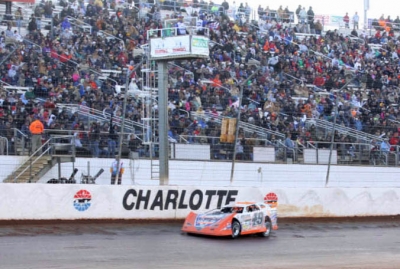 With a hard 70-compound Hoosier tire bolted on the right-rear corner of his Barry Wright Race Cars house car, Davenport was able to master the 4/10-mile oval’s sun-baked afternoon surface. He surged forward from the sixth starting spot to pass Tim McCreadie of Watertown, N.Y., for the lead on lap 11 and never looked back en route to his first career WoO LMS triumph.

“This is real exciting,” said Davenport, who earned $10,500 for bagging a checkered flag in the first half of a Lowes Foods World Finals doubleheader that attracted more than 14,000 fans. “You can’t get no bigger crowd than this, and I’ve always loved this place.”

Rick Eckert of York, Pa., who started from the outside pole, crossed the finish line 3.140 seconds behind Davenport after inheriting the runner-up spot on lap 37 when McCreadie slowed with a flat right-rear tire. McCreadie started from the pole position and led laps 1-10.

Steve Francis of Ashland, Ky., advanced from the fifth starting spot to finish third, also behind the wheel of a car built by Wright. Darrell Lanigan of Union, Ky., started 12th but charged forward to place fourth and fourth-starter Dan Schlieper of Sullivan, Wis., completed the top five.

Lanigan’s run pulled him within just six points of WoO points leader Josh Richards of Shinnston, W.Va., who struggled to a 12th-place finish. The two friendly rivals will conclude their dramatic battle for the tour’s $100,000 championship in Saturday night’s regularly-scheduled second half of the Lowes Foods World Finals.

“We’ve gone at it the same way all year and we’re gonna go out there tonight to try and win the race and see what we can come up with (in the points),” said Lanigan, who bolted softer-compound tires on his car for the afternoon event in an attempt to pick up spots during the early stages. “It’s unbelievable that we’ve run all season and the points are going to come down to just a couple positions.”

While Lanigan and Richards chase the WoO LMS crown in Saturday’s nightcap, Davenport will bid for an unprecedented clean sweep of the full-fender portion of the Lowes Foods World Finals. He set fast time in both rounds of qualifying on Thursday night and won a heat race during Saturday afternoon’s program, which was postponed by rain on Friday night.

Davenport expects the road to victory in the evening show to be a bit more difficult, however.

“Today we just put on the right tires,” said Davenport, who was briefly threatened by McCreadie late in the race before clearing lapped traffic and pulling away to a comfortable edge. “I thought it was a no-brainer (to go with a hard tire). Me and Barry looked at each other and we thought the exact same thing — we didn’t even say what tires we were gonna put on.

“Then we got up to the (starting) grid and nobody had them on, and we started thinking maybe we were wrong. But as soon as we took off, we knew we were right. Hoosier has great tires — this new 70 just fired right up.”

Three caution flags slowed the event, including one on lap nine for Shane Clanton of Fayetteville, Ga., who stopped with a broken rear end. Clanton, who used a provisional to start the A-Main after spinning during his heat, finished 25th and lost fifth place in the WoO points standings to Eckert.