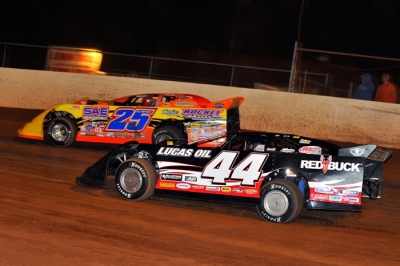 MINERAL WELLS, W.Va. (Oct. 16) — After falling dramatically short in a pair of major mid-summer races, Earl Pearson Jr. finally put it all together Saturday night at West Virginia Motor Speedway to capture a win in one of Dirt Late Model racing's crown jewel events. The Jacksonville, Fla., driver came out on top of a race-long battle with Shane Clanton of Locust Grove, Ga., to earn his career-first Dirt Track World Championship victory and a $50,000 payday. | Complete DTWC coverage

It took Pearson three attempts to make a pass on Clanton stick, but when he finally made the winning move on lap 70, Pearson never looked back in the unsanctioned event promoted by Carl Short. The four-time Lucas Oil Late Model Dirt Series champion opened up nearly a half-straightaway lead on the 5/8-mile speedway before catching lapped traffic in the final 10 laps. With traffic in a line around the bottom of the track, Pearson simply rode behind the slower cars and Clanton didn't have enough to close the gap.

"It feels great for us and the whole Bobby Labonte Racing team," said Pearson of his victory in the 30th running of the prestigious event, which returned to its native West Virginia for the first time since 2001. "We've been so close for so many years at this race. We finished (fourth) last year. It feels so good to come home with the check here. My crew's doing a heck of a job and all our sponsors. It's a dream come true for us."

After moving from third to second on the start of the race, Pearson trailed close behind the polesitting Clanton for the first 14 laps of the 100-lap race. Pearson pulled head on lap 15, but he couldn't complete the pass and Clanton was back out front on lap 16.

"I thought I had him cleared, but I wasn't really sure," Pearson said of the early battle. "It was early in the race and I didn't really want to slide job him that early. I just kind of held on there to wait until later."

As the track began to lock down in the bottom groove, Pearson began to wonder if he would even get another shot at the lead on the chilly West Virginia evening.

"The track rubbered up and I thought, 'Man, I've done screwed myself out of this win,' " Pearson said. "But that early in the race you don't want to get yourself in a position where you take yourself out. Luckily everything came together for us."

Everything started coming together for Pearson after the race's lone caution on lap 60 for a slowing Tyler Reddick. Starting alongside Clanton, Pearson was able to pull ahead on the restart only to again see Clanton go back by on the outside seconds later. Clanton remained on the high side even after clearing Pearson, and when he slid out of the groove on lap 70, Pearson was there to finally claim the lead for good.

"We had that caution and I knew I had an opportunity right there to get in front of him if he picked the bottom," Pearson said. "We came (into turn one) and I got in front of him, and he drove back by me. But he stayed up out of the groove. I couldn't figure out what he was doing.

"When he drove by me on the outside I think he thought he had a better line up there. So it worked out to my advantage on that part."

Clanton indeed felt the higher groove was the place to be as the race entered the late stages.

"I had been running in the middle of the race track the whole race and after the caution that's where I passed him at," Clanton said. "It's like we started catching (lapped cars) and they started throwing more dust (onto the racing surface). The lap he passed me I just went in the corner and it was like I was on ice."

Clanton was frustrated after leading so many laps, only to come up short because of a mistake.

"If we had been in lapped traffic it would have been one thing, but we really hadn't caught lapped traffic yet," Clanton said. "I just messed up and didn't go to the bottom soon enough."

The win helps ease the disappointment Pearson felt from a pair of August losses in the waning laps. Jimmy Owens overtook Pearson heading for the white flag at Florence (Ky.) Speedway's North-South 100 and he lost a late duel with Jared Landers at Batesville (Ark.) Motor Speedway's Topless 100.

"The biggest thing is that all these races this year have been a disappointment for me," Pearson said. "Like the North-South, the Topless 100. We got passed (late) in both of them deals."

Pearson's victory also comes at a time when he's dealing with the emotional effects of caring for his ailing mother.

Steve Francis of Ashland, Ky., who lost his brakes earlier in the race, finished third but never contended for the victory while Jonathan Davenport of Blairsville, Ga., held third much of the race before settling for fourth. Ninth-starting Jimmy Owens of Newport, Tenn., was fifth.

Notes: Pearson’s Bobby Labonte Racing Longhorn Chassis is sponsored by Lucas Oil Products, SlickMist and Red Buck Tobacco. … Pearson also earned $50,000 on March 29, 2009, with a victory in the Circle K Colossal 100 at the Dirt Track at Charlotte Motor Speedway. ... The victory was Pearson's eighth overall of 2010. ... Twenty drivers were running at the finish with 19 finishing on the lead lap. … Steve Shaver of Vienna, W. Va., lowered the track record in time trials Friday night, but was never a factor in the feature race. He finished 10th. … Of the four heat race winners, Jimmy Owens was the only one to finish in the top five. … Davenport earned $10,000 for winning the 50-lap Fastrak Crate Late Model feature. Davenport lapped all but three drivers in claiming his second $10,000 Crate win of the season at WVMS.