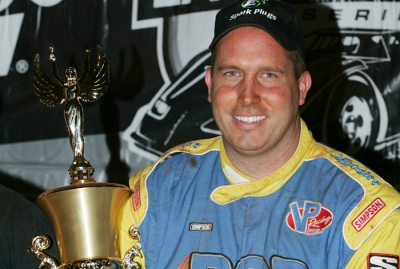 ROME, Ga. (Oct. 10) — Getting a satisfying victory at one of the tracks where he grew up racing, Shane Clanton of Fayetteville, Ga., earned $10,000 Sunday for capturing the Rome Showdown on the Lucas Oil Late Model Dirt Series.

The 35-year-old Clanton took the lead from Don O'Neal of Martinsville, Ind. on the 26th lap and ran unchallenged the rest of the 50-lapper in front of a big crowd at the northwest Georgia oval. | 2011 schedule | Slideshow | Video

"I went with a little softer left-rear tire than anybody else," Clanton said. "O'Neal was strong early on, but once we were able to get some heat in the tire we were able to catch him and get by him," Clanton said. "I have to give a big thanks to (former Dirt Track World Champion) Marshall Green for this win. He came over before the feature and changed some things on the car. He has a lot of laps here, and the changes he made are why we are here in victory lane. ...

"It's good to get a win here in front of the home-state crowd."

O'Neal and Francis started on the front row with O'Neal quickly taking command as Francis slipped back to fourth at the outset. O'Neal dominated early in the race, holding a six-length advantage on the fourth-starting Clanton.

Clanton slowly drew closer to O'Neal after 20 laps, and pulled alongside for a near-dead heat at the halfway point of the race. Clanton edged ahead on lap 26 and began pulling away while Madden dropped O'Neal to third on lap 34.

Three cautions over the last 14 laps slowed the action, but Clanton stayed in control to grab his third career Lucas Oil victory.