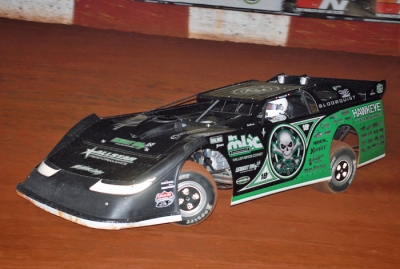 WOODSTOCK, Ga. (Oct. 9) — Scott Bloomquist's not done with the Lucas Oil Late Model Dirt Series yet. Moments after winning the 21st annual Dixie Shootout to wrap up his second straight series championship. the 46-year-old Hall of Famer from Mooresburg, Tenn., was already starting to talk about a third potential championship. | 2011 schedule | Slideshow | Video

Bloomquist took the lead after a flat tire for four-time series champion Earl Pearson Jr. of Jacksonville, Fla., on the ninth lap and led the rest of the 50-lapper for a $10,000 victory, his series-leading ninth of the year and 26th of his career.

"This is what we worked for all year long, to win this Lucas Oil Championship again," Bloomquist said in victory lane. "I have to thank my crew and my sponsors for their help all year. My family has been great through all of this, and the championships and such are something to look back on someday when you're retired.

"Earl fired off real good at the start, I am not sure what tires he had on, but he was running up in the rough and I knew if he kept doing that the tires couldn't take the punishment and he eventually had the flat. We tried to be smooth from then on after what happened to Pearson, I tried to stay lower than the cushion and it worked out good."

Bloomquist and Pearson started on the front row with Pearson bolting the lead to command the race's early stages. But his right-rear tire went flat under caution, sending him to the pits for new rubber and to the tail for the restart as Bloomquist inherited the point.

Clanton, Madden, Don O'Neal and Randy Weaver took up the charge on Bloomquist on a rugged racing surface, and O'Neal faded with right-front suspension problems and Weaver faded with shock problems.

Bloomquist had a six-length lead over Clanton as the final caution flew on lap 36 when Steve Casebolt hitï¿½ the frontstretch wall. Clanton gathered up his car for one final rally on Bloomquist late in the race, but fell short.

"He's won this race five or six times," Clanton said, "so to finish second to him feels pretty good."