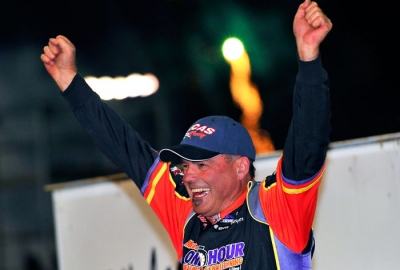 Billy Moyer celebrates as fireworks shoot off in the background. (thesportswire.net)

KNOXVILLE, Iowa (Oct. 2) — Racing less than an hour from his boyhood home, 52-year-old Billy Moyer of Batesville, Ark., found himself playing host to old high school friends at Knoxville Raceway. Those buddies might have to revise the caption under Moyer's yearbook picture: Most Likely to Become the First Driver to Sweep the Lucas Oil Late Model Nationals.

Continuing perhaps his best season in a career with 737 feature victories, Moyer dominated Saturday's 100-lap finale at Knoxville, adding the $40,000 payoff to a pair of $7,000 victories on Thursday and Friday for a whopping $54,000 weekend against a field of the nation's best Dirt Late Model racers. | Complete Knoxville coverage

Moyer's nation-leading 24th touring victory in 2010 gives him more than $324,000 in winning purses as the driver critics called over-the-hill a few years ago looks more than ever like he's still in his prime.

"We've been up here on this podium two or three times before," Moyer said after leading all but 12 laps, "but never here on the top, so it just feels good to get here finally."

Starting outside the front row, Moyer overtook polesitter and long-time rival Scott Bloomquist on the 12th lap and virtually dominated the rest of Iowa's richest Dirt Late Model race. Darrell Lanigan sneaked up to briefly lead lap 20, while Shannon Babb and Josh Richards took a few stabs at Moyer later in the race. But there was no denying Iowa's native son on a chilly night at a half-mile oval famous for its sprint car racing.

"The last 20 laps, I thought we were going to have something," said Shinnston, W.Va.'s Richards, who started 11th and finished second. "But all the sudden a switch flipped, and he just took off."

Moyer aggressively sliced through lapped traffic in the late stages, building a four-second lead on Richards and leaving the crowd of 8,500 certain of the outcome as long-time Knoxville flagger Doug Clark started to reach for his white and checkered flags.

"When I saw we were close to the end," Moyer said, "I felt like I didn't have to conserve tirewise anymore. So you just go for it."

Moyer made his third trip to Knoxville's victory lane in as many nights and showed off to friends and family he left in Iowa when he moved to Larry Shaw's Arkansas shop as a teenager to pursue a racing career.

"Just being here at the home state and all, my family here, it's just cool to be able to show off in front of all them guys," Moyer said. "That's probably as neat as anything. A lot of these guys only come to a couple of races a year, and some people I went to school with and grew up with, some of my best friends back in high school, came here. It's neat to be able to show 'em what we do."

With "so many people around the trailer all day long wanting to talk and look, it takes your concentration away from the car," Moyer said. But you couldn't tell by his performance as he captured his seventh victory in his last 11 starts, a stretch that includes an unprecedented sixth World 100 at Ohio's Eldora Speedway.

Richards finished second at Knoxville for the second time in three years while Lanigan, of Union, Ky., settled for third. Steve Francis of Ashland, Ky., rallied from a second-lap spin to finish fourth and Will Vaught of Crane, Mo., came from his 22nd starting spot to finish fifth in a race slowed by 12 cautions and a lap-69 fuel stop.

Babb, of Moweaqua, Ill., faded from contention after the fuel stop and Bloomquist, Knoxville's only two-time winner, lost a lap in the pits on a lap-57 caution to fall from contention.

In Moyer's semifeature victories on Thursday and Friday, he made winning passes exiting turn four to lead the late stretches of both 25-lappers. On Saturday, Moyer spent most of the time out front, using an unorthodox line of charging low into turns one and three while drifting high in turns two and four on a slick track that allowed multigroove racing.

"It just felt like that's what the car I wanted," Moyer said. "I could drive in hard low there and just let it drift out and there was enough cushion out there on exit that you kind of get against it, and rock and roll off the corner, on both ends there really.

"It was a strange line, but that's what worked tonight. It might not ever work again, but it was OK for tonight."

Moyer's performance impressed not only old Iowa friends, but the drivers who chase him at seemingly every big-purse event in 2010.

"Hat's off to those guys. They've been on a roll this year," Richards said of Moyer's team. "We had a good car tonight. I thought we were really going to have something tonight. We got caught up in lapped traffic there and I kind of got right up under his door a few times."

But in the final 20 laps, Richards and his Rocket Chassis house simply couldn't keep up with Moyer's Victory Circle Chassis.

"It's definitely a huge honor just to get to race with him and everything with what he's accomplished. ... it's pretty cool," Richards said. "We've been second here twice now, and we've been close in these big races. We just have to keep digging at it and just learn from it and move on."

Lanigan joined Moyer and Richards in a three-car breakaway after the final caution on lap 71, but third was the best he could do.

"There at the beginning I thought we had something for Billy. We could run right there with him. We just got a little bit free there at the end. We just needed to be a little tighter there on the exit to the corner," Lanigan said. "The way the weekend started off — we had a bad Thursday night there and blew up the motor I planned on running — but everything turned out pretty good. We'll take a third here. Billy's been awesome this year. It's his year to win."

Notes: Moyer's Victory Circle Chassis has a Clements Racing Engine and sponsorship from Banner Valley Hauling, L&D Trucking, Minx Show Palace and New Vision Graphics. ... Moyer has seven career victories at Knoxville, a track that rarely runs Late Model events. ... Moyer lapped all but 10 drivers in the 30-car field. .... Twenty-one drivers were running at the finish. ... Thirteen drivers reached the top five spots at some point in the race. ... Most of the cautions were for cars slowing with flat tires and other problems. The only multicar incident came on a lap-two restart when contact sent sixth-starting Steve Francis spinning in turn two. Most cars up front avoided him, but Brad Neat, Jason Rauen, Darren Miller and Rob Moss were among drivers getting a piece of it. ... Among drivers suffering flats: Brian Birkhofer, Matt Miller, Jimmy Owens and Dan Schlieper. ... Kelly Boen spun out of 11th on the 37th lap but came back to finish 12th. ... The Late Model event closes Knoxville's season.