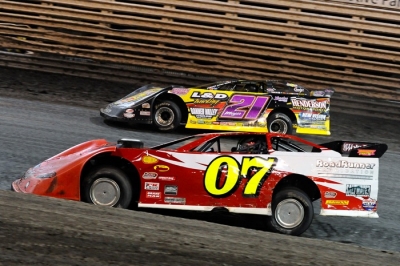 KNOXVILLE, Iowa (Oct. 1) — Entering this year's Lucas Oil Late Model Nationals at Knoxville Raceway, never had a single driver captured more than one of the three weekend events. Billy Moyer of Batesville, Ark., is at two and counting.

Catching polesitter Josh Richards in the final laps, the 52-year-old Moyer won Friday's semifeature at the half-mile oval for his second straight victory at the seventh annual event. Moyer pocketed $7,000 and earned a front-row starting spot for Saturday's $40,000-to-win finale, where he'll gun for his third victory in as many nights. | Complete Knoxville coverage

"You've got peaks and valleys, and right now we're up there on top enjoying it," said the sixth-starting Moyer, who notched his 23rd victory of the season, tops among touring racers. "Just everything's clicking right. You've just gotta put yourself in position, and I guess that's what we've been doing."

Kelly Boen of Henderson, Colo., was hot in Moyer's tire tracks in the final laps in settling for second while Richards, who led significant laps for the second straight night after starting on the pole, ended up third. Darrell Lanigan of Union, Ky., won a late-race battle for fourth over Tim McCreadie of Watertown, N.Y.

Outside front-row starter Will Vaught of Crane, Mo., led the first two laps, but when he got into the frontstretch wall, he flattened his right-front tire and handed the lead to Richards for the restart after the race's lone caution.

Richards wasted no time in pulled away from Boen and Lanigan, and by the time Moyer overtook them to get into second on the sixth lap, Richards had nearly a full straightaway margin.

He maintained at least half-straightaway edge through the race's middle stages, but Moyer and Boen closed in as Richards faced traffic. Moyer was just 10 lengths behind on lap 19, and when Richards tried to go around Mark Burgtorf on the 22nd lap, he washed high in turns three and four and Moyer beat him back to the start-finish line.

Boen dropped Richards to third a lap later and it was all but over for the red-hot Moyer.

"I kind of made up a little bit (of ground), but those lapped cars sort of made the difference, and that's the difference a lot of times in running second," Moyer said. "The guy in the front has to make decisions a lot of times, and the guy riding in second or third can benefit from the misfortune if they make the wrong move."

In hindsight, Richards said he'd never have tried to work the outside in overtaking Burgtorf.

"I guess we just ran such a long pace right around the bottom, I thought I could just roll right around him or whatever. But that definitely wasn't the case," the 22-year-old Richards said. "It's kind of aggravating. ... When you're the leader, you don't really know how close everybody is ... I screwed up tonight and I'll just have to come back tomorrow and do better."

Boen made up more ground than anyone the last 10 laps, but he never took a serious shot at overtaking Moyer in the final laps.

"I was thinking about finding out how much plastic I could put on that back bumper of that (Moyer's car)," Boen joked after the race. "But we just don't race like that. We were all out there having a good time, and it was a great night."

Scott Bloomquist of Mooresburg, Tenn. — who started on the tail in Friday's event and used it as a test session — is scheduled to start on the pole with Moyer alongside. Earl Pearson Jr., Brian Birkhofer, Tim McCreadie and Steve Francis fill spots in the second and third rows. Twenty-four drivers in all are locked into the 30-car starting field.

Notes: Moyer's Victory Circle Chassis has a Clements Racing Engine and sponsorship from Banner Valley Hauling, L&D Trucking, Minx Show Palace and New Vision Graphics. ... Moyer, an Iowa native, has six career victories at Knoxville. ... Saturday's action includes a C-main and B-main to fill out the rest of the 100-lap grid. John Duty of Portland, Ore., started on the pole of the C-main, which sends four drivers to the B-main. Jack Sullivan of Greenbrier, Ark., is on the pole of the B-main, which sends six drivers to the main event.