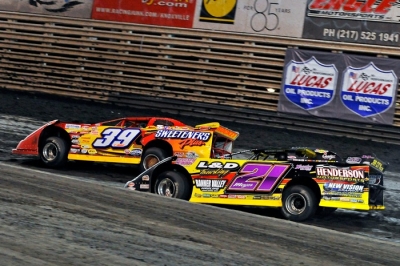 KNOXVILLE, Iowa (Sept. 30) — Heading toward the sunset of one of his best seasons, Billy Moyer made himself a favorite to win his native state's richest Dirt Late Model race on Thursday by capturing the first of two semifeatures at Knoxville Raceway's seventh annual Lucas Oil Late Model Nationals. | Complete Knoxville coverage

Rallying from his 11th starting spot, the 52-year-old Hall of Famer — who races out of Batesville, Ark., after moving from Des Moines more than 30 years ago — racked up his 22nd victory of the season by outgunning former Knoxville winner Tim McCreadie of Watertown, N.Y.

McCreadie started outside of the front row and regained the lead from polesitter Josh Richards of Shinnston, W.Va., on the 10th lap, but Moyer slipped by Earl Pearson Jr. of Jacksonville, Ark., for second on the 16th lap, then swept underneath the high-running McCreadie exiting turn four to lead lap 17. Moyer cruised the rest of the way, winning by a half-straightaway margin at the half-mile oval, a sprint-car stronghold that closes its season with Saturday's unsanctioned $40,000-to-win extravaganza.

"The bottom I think was the fastest because there was so much grip there, but that's where everybody was at, so you had to maneuver around," said Moyer, who earned $7,000 for capturing the prelim on a night with 61 competitors in the infield pits. "Our car, overall, it seemed like I could go about where I needed to go."

McCreadie was glad his solid performance assures him a solid starting spot in Saturday's 100-lapper, but he was disappointed he let Moyer slip by in the 25-lapper.

"I didn't know he was there. It's tough. You don't know (where competitors are running and) there's no crew guys to help here," He said. "I thought the outside was so good through (turns) one and two and I'd hit it and come down the hill, and I didn't realize I was losing that much (speed) until I moved back down after he passed me ... and I thought we were every bit as good as him.

"He could maneuver the lapped traffic just a touch better than I could, but it's in the books now."

McCreadie was a half-straightaway ahead of third-place finisher Scott Bloomquist of Mooresburg, Tenn., last year's Knoxville winner and the event's only repeat winner. Bloomquist started eighth after officials inverted the first four rows of the main event.

Earl Pearson Jr. of Jacksonville, Fla., held the second spot from laps 11-15 but faded to fourth and 10th-starting Brady Smith of Solon Springs, Wis., the '07 winner at Knoxville, rallied to finish fifth. Richards, who led laps 3-9, dropped to a seventh-place finish.

The race was slowed by a single caution for a retiring Steve Francis of Ashland, Ky., on the seventh lap.

McCreadie lost his initial lead to Richards on the third lap, but following the lap-seven restart, action was tight at the front of the pack as McCreadie went around Richards exiting turn two on the ninth lap while Moyer and Pearson closed to make it a four-car battle for the lead. The quartet battled through the race's middle stages with Moyer gaining momentum and leaving Pearson and then McCreadie in his dust.

Notes: Moyer's Victory Circle Chassis has a Clements Racing Engine and sponsorship from Banner Valley Hauling, L&D Trucking, Minx Show Palace and New Vision Graphics. ... Moyer has five feature victories at Knoxville. ... A light crowd enjoyed a beautiful warm evening that cooled off, wonderful weather that contrasted last year's rainy event. ... Jimmy Owens of Newport, Tenn., the night's fast qualifier, failed to make the feature event after struggling in his heat race. ... All the previous Knoxville Nationals winners are in attendance. ... Scott Bloomquist said he would likely sit out Friday's action to save his car and engine for Saturday's main event.