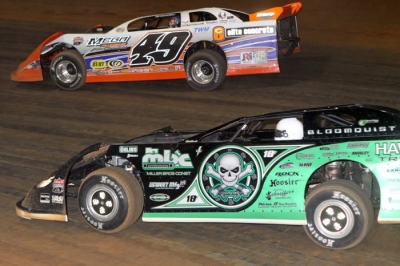 JAMAICA, Va. (Sept 18) — Jonathan Davenport of Blairsville, Ga., entered the two-race weekend in Virginia winless on the Lucas Oil Late Model Dirt Series. He wrapped up the weekend as the hottest series driver.

Davenport completed his Virginia sweep on Saturday by capturing the 31st annual ASi Racewear USA 100 at Virginia Motor Speedway, leading all 50 laps of the main event. He added $15,000 in earnings at VMS to his $10,000 victory a night earlier at Winchester (Va.) Speedway. | Slideshow | Video

Starting outside the front row at the half-mile oval, Davenport outran polesitter and series points leader Scott Bloomquist of Mooresburg, Tenn., while Earl Pearson Jr. of Jacksonville, Fla., was third. Steve Shaver of Vienna, W.Va., and Dale McDowell of Chickamauga, Ga., rounded out the top five.

“To win one Lucas Oil event this weekend was special, but to back it up here tonight with a win against this type of competition is just fantastic,” said the 26-year-old driver of the Barry Wright house car. “The car was fast all night, we came out and broke the track record, won our heat and I tried a couple of different lines out there in the feature, the car was just a dream to drive.

“I have to thank Barry and Lance Wright for giving me the opportunity to drive their equipment ... we are really on a roll right now and we hope to continue to finish the season strong."

Davenport took the lead from the outset but had to be patient through seven caution periods that dotted the event. He fought off challenges from Bloomquist and Pearson at various times during the race, but managed to stay in control as he pulled away over the final 10 laps.

Bloomquist, who is seeking to win his 500th career victory, beat Pearson into turn one after a lap-37 restart and held on to second the rest of the way.

Notes: Davenport's Barry Wright Race Car is powered by a Clements Racing Engine and sponsored by Nichols Plumbing, Dirtwrap, Baird Transport, Elite Concrete and Mega Plumbing of the Carolinas. ... Third-starting Chris Madden was knocked out of the race after a frontstretch tangle with Jimmy Owens; Madden climbed from his car and flung his steering at the No. 20 of Owens under the caution period. ... Davenport's 16.731-second quick lap lowered the previous mark held by Shane Clanton of Fayetteville, Ga. (17.097 seconds) set in 2007. ... Among drivers failing to make the feature: Dan Schlieper, Tim Isenberg, Walker Arthur, Chuck Harper, Ronnie DeHaven Jr., David Williams and Donald Bradsher. ... Next up for Lucas Oil competitors is the Jackson 100 at Brownstown (Ind.) Speedway on Sept. 24-25.