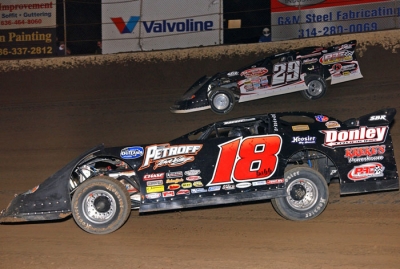 PEVELY, Mo. (Sept. 18) — Shannon Babb finally reached the Promised Land in a World of Outlaws Late Model Series event at I-55 Raceway. And the 36-year-old star from Moweaqua, Ill., did it in breathtaking fashion, outdueling the red-hot Billy Moyer in a classic battle to capture Saturday night’s 28th annual Pepsi Nationals. | Video

Turning around a moribund season with dramatic flair, Babb used the inside groove to vault from eighth to third on a lap-29 restart and went on to wrestle the lead from Batesville, Ark.’s Moyer on lap 48 of the 55-lap main event. The two-time UMP DIRTcar Summernationals champion earned $10,000 for his 10th career victory on the WoO but first since March 21, 2009, at Battleground Speedway in Highlands, Texas.

The triumph brought a joyful end to Babb’s string of close-but-no-cigar runs in WoO competition at the third-mile, high-banked oval. He entered Saturday’s action as the only driver with a top-five finish in the national tour’s three previous visits to I-55 after placing a hard-charging second in 2007 and fifth in both 2005 (he lost the lead to eventual winner Moyer late in the distance) and 2008.

Adding even more significance to Babb’s breakthrough was his defeat of Moyer, who had been victorious in all three of his previous appearances this season at I-55 and was just one week removed from winning an unprecedented sixth career World 100 at Eldora Speedway in Rossburg, Ohio.

“That was really cool,” Babb said of a race that ranked as one of the most memorable of the 2010 WoO campaign. “That guy (Moyer) has been unbeatable all this year and I don’t even know when the last time was that I won a race — that’s why I’m so happy.”

Moyer, 52, settled for a second-place finish, 0.411 of a second behind his protege at the checkered flag. He nosed ahead to lead laps 26 and 43 but couldn’t maintain command of the event, which featured six lead changes among four drivers.

Brady Smith of Solon Springs, Wis., who started 13th, was closing on the leaders in the final circuits but had to be content with a third-place finish. Polesitter Darrell Lanigan of Union, Ky., slipped to fourth at the finish after leading laps 15-25 and 27-41 and Clint Smith of Senoia, Ga., advanced from the 11th starting spot to place fifth, registering his fourth top-five run in the last five WoO events.

Lanigan’s fourth-place finish moved him back into the WoO points lead by two points over defending champion Josh Richards of Shinnston, W.Va., who started and finished sixth. Just three events remain in the chase for the tour’s $100,000 points title — all at the Dirt Track at Charlotte in Concord, N.C., which hosts the World of Outlaws Late Model Shootout on Oct. 13 and the World Finals on Nov. 4-6.

Babb, who started ninth in a Donley Trucking-Petroff Towing Rocket Chassis that he debuted one month ago, waited until just after the race’s halfway point to make his move. He had advanced just one position when two of three caution flags flew on lap 29 — the first for the ambulance to leave the infield and the second for a slide-and-stop by outside polesitter Tim McCreadie of Watertown, N.Y., who led laps 1-14 and was still running second when he lost control of his car on the inside of turn four.

On the second restart, Babb found traction on the extreme inside of the track and passed five cars in the span of a lap. One circuit later he overtook Moyer for second and almost immediately began to challenge Lanigan for the lead.

“It surprised me,” Babb said of his sudden surge into contention. “Our car seemed to be good right from the start, but it was so competitive out there I didn’t know what I was gonna do at the beginning. I moved around top-to-bottom so I knew that bottom was there, but you can’t keep up when the top’s as good as it was.

“I had to wait for the middle and top to slow down. Once that happened, I moved down and the bottom was the place to be for the last 30 laps.”

Babb praised the I-55 racing surface, which produced three-wide racing for the lead — early with Lanigan, McCreadie and Moyer, and later with Babb replacing McCreadie in the pacesetting trio — that had the evening’s large crowd standing and cheering.

“(Ray) Marler and (Ken) Schrader (who co-own the speedway outside St. Louis) put an awesome racetrack together tonight,” said Babb. “They went the extra mile and worked the racetrack really good (just prior to the feature). All the way to the end we were battling — that’s probably the best racing surface I’ve seen here.”

Moyer, who started third, thought he was in position to win the race several times during the frenetic late-race struggle but simply couldn’t get his Victory Circle chassis through lapped traffic well enough to beat Babb. The former WoO champion nevertheless seemed energized by his race with Babb, who received a hearty congratulatory handshake from Moyer in victory lane.

“The fans had to love that race,” said Moyer, who over the past three months won Northern Allstars, Summernationals and MARS DIRTcar Series events at I-55. “That was fun. The fans saw a heck of a show.”

Finishing in positions 6-10 was Richards, who climbed as high as fourth; Steve Francis of Ashland, Ky., who ran fifth for much of the race’s first half; a rallying McCreadie, who was presented the $100 Chizmark Larson Insurance Hard Luck Award; 19th-starter Chub Frank of Bear Lake, Pa.; and 2010 WoO Rookie of the Year Austin Hubbard of Seaford, Del.

Wendell Wallace of Batesville, Ark., faded to an 11th-place finish after starting fourth and running in the top five until nearly the halfway mark, but he still earned a $500 bonus for being the highest-finishing driver who hasn’t won a WoO event and wasn’t ranked among the top 12 in the points standings.

The feature was run under the threat of approaching thunderstorms, but while lightning danced in the sky throughout the 55-lapper the precipitation held off until nearly a half-hour after the checkered flag.