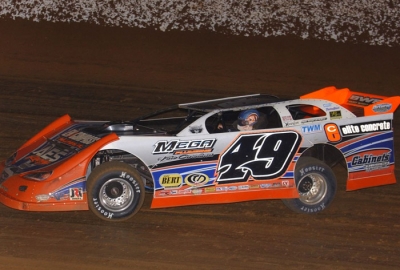 Davenport took the point from race-long leader Jimmy Owens of Newport, Tenn., on the 37th lap and outdueled runner-up Earl Pearson Jr. of Jacksonville, Fla., and Josh Richards of Shinnston, W.Va., for the victory.

"I'm at a loss for words to describe this win — it's my first Lucas Oil Series win, Barry Wright's first Lucas Oil victory. I hope it doesn't take as long to get the second one," said Davenport, who became the 12th series winner of 2010. "The track was excellent tonight, it was my first time here and obviously I really took a liking to the track. You could run anywhere out there, Jimmy and I, Richards and Earl, we put on quite a show, I hope the fans enjoyed that one."

Pearson was second followed by Richards while Owens slipped to a fourth-place finish. Series points leader Scott Bloomquist's night started off rough when he flipped his primary car in a heat race, but the Mooresburg, Tenn., driver rallied from the tail of the feature in a backup car to finish a solid fifth.

Four cautions slowed the action in the laps before the midpoint, but Owens maintained his advantage while Davenport, Pearson and Richards jockeyed for position behind him. Davenport shook off the challengers and caught Owens, taking the lead on lap 37 and pulling away after the eighth and final caution on lap 39.