Out of this world: Moyer grabs record sixth globe 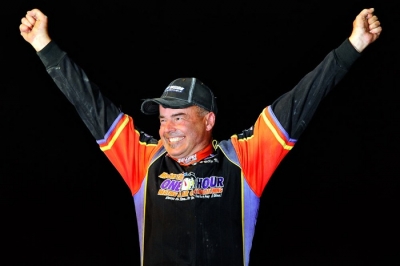 The 52-year-old Moyer’s $43,000-plus triumph in the 40th annual spectacular came almost exactly three months after he pocketed $100,000 for emerging victorious in the famed half-mile oval’s Dream XVI. He won both 100-lappers in the same season for the second time in his Hall of Fame career.

Moyer pulled off his previous Dream-World 100 double in 1998 — and the last time he had held the coveted World 100 globe trophy was in 2000. So with an amazing 2010 effort, he effectively turned back the clock to his glory years at the Big E.

The past decade was a rough one at Eldora for Moyer, who finished third in the 2001 World 100 but over the next eight years didn’t place higher than 21st and failed to qualify for the main event four times. He was beginning to wonder if he’d ever recapture his magic at the track founded by Earl Baltes and now owned by NASCAR star Tony Stewart.

“I once said if I could win this thing six times I’d get up on my white horse and walk away,” Moyer said of the World 100, which stands as Dirt Late Model racing’s biggest event. “Right now, I don’t know.”

Moyer can’t quit, not after proving he’s at the top of his game with an epic come-from-behind victory. He thrilled the capacity crowd as he cut through the talent-laden field to take the lead from 2005 World 100 winner Dale McDowell of Chickamauga, Ga., on lap 66 and then beat three-time World 100 champion Scott Bloomquist of Mooresburg, Tenn., to the finish line by about five lengths.

McDowell, who started 17th and led laps 42-65, settled for third place after being overtaken by Bloomquist on lap 96. Outside polesitter Don O’Neal of Martinsville, Ind., finished fourth and 2007 World 100 winner Jimmy Owens of Newport, Tenn., completed the top five.

But despite the speed Moyer showed with his Banner Valley Hauling Victory Circle chassis, he had his doubts that Saturday would mark the end of his long World 100 slump.

“The way the weekend started I never would’ve thought it was gonna happen,” said Moyer, who transferred through a consolation races in the UMP DIRTcar event after qualifying only 48th-fastest in Friday night’s 134-car time-trial session and finishing a quiet fourth in a heat race. “But when you get backed up against a corner is when you start throwing things at the car. We made an estimated guess on what to do to the setup and it worked.

“Starting that far back, there wasn’t no conserving tires, no conserving anything. It was just as hard as you can run for 100 laps. It was like the good old days here.”

After walking a tight rope around the treacherous top side of the Eldora high banks to win the Dream on June 13, Moyer switched to the inside lane in the World 100. He mastered a groove that was brought alive by the mid-afternoon rain that wet the track enough to cause a one hour, 45-minute delay in the start of the evening’s heat action.

“Line-wise this place usually isn’t down around the bottom,” said Moyer, who needed just 33 laps to work his way into the top five. “But I always said you could race (on the inside) if they would put enough water down there — and Mother Nature done that for us this time.”

McDowell, 44, beat Moyer to the front of the pack, inheriting the lead when last year's World 100 winner Bart Hartman of Zanesville, Ohio, suddenly retired with an expiring engine after starting from the pole and leading laps 1-41. But Moyer slipped by O’Neal for second on lap 51 and ran down McDowell without the benefit of a caution flag.

“Dale was real good there at the beginning of the race,” said Moyer, who ended a streak of eight consecutive first-time World 100 winners. “We were kind of following each other up through there and he got away from me, and I thought, Well, he’s the winner. He was gone. But something seemed like it gave up on his car a little bit and we got a little better.”

Good enough, in fact, for Moyer to continue his 2010 renaissance. He’s won 100-lappers over and 21 overall features, the most among any touring driver.

“Being 52, back four or five years ago, I was washed up and done — the word was going around,” said Moyer. “But even back then I thought we had decent years. We never had a year where we just won one or two races; we at least won a half-dozen.

“It’s just a competitive game, and building these (Victory Circle) cars has put a spark in me.”

The 46-year-old Bloomquist, meanwhile, was on the move as the race wound down with a 72-lap run of uninterrupted green-flag racing, passing Owens for fourth on lap 82, O’Neal for third on lap 85 and then McDowell for the runner-up spot with just four laps remaining. Bloomquist was able to slice his deficit to Moyer in half over the remaining distance but ran out of time.

“We were three- to five-tenths a lap faster (at the end) and just needed two more laps,” said Bloomquist, who started fifth. “But what can you say? (Moyer) gambled. He was starting in the back, and he went with (tires) everybody in the field would’ve considered ridiculously soft. Nobody can believe it worked — and I’d say you’ll never see that again here. I don’t think anybody will ever win a race on that soft a tire again.”

“We ran a harder tire on the left-rear than probably anybody in the field and it was probably not the right thing to do,” said Bloomquist, who fell as far back as seventh early. “It just took too long to get the left-rear hot enough to get it working.

“I never, ever would’ve dreamed the racetrack would stay brown as long as it did – and the middle was still brown at the end. With it brown, (the hard compound) just wasn’t the right tire to have on the left-rear of the car. I felt like we definitely had the best car just to be able to carry that tire as long as we did.”

McDowell, who was seeking to win the World 100 outright for the first time after inheriting the checkered flag in 2005 when apparent victor Shannon Babb of Moweaqua, Ill., was disqualified for weighing in light, felt a miscalculation dive-bombed his chances.

“I screwed up,” said McDowell, who drove a Warrior car owned by NASCAR Sprint Cup Series star Clint Bowyer. “I should’ve stayed on the bottom. I made my way up through there on the bottom, but I didn’t know what I needed to do (once in the lead) so I just started letting the car run wide to carry some speed. I probably had a chance (to hold off Moyer) if I stayed down on the bottom.

“I’m the manager, so I take the blame. I didn’t really delegate a spot for the boys (his crew members) to give me signals, so I was just lost. It’s hard to feel what’s fast here when you’re in the lead.”

Five caution flags slowed the event, all during the first 28 laps. None were for serious incidents.

Earl Pearson Jr. of Jacksonville, Fla., finished sixth after starting 25th, but he never drew close enough to bid for a top-five spot. The remainder of the top 10 was filled out by Darrell Lanigan of Union, Ky., Shane Clanton of Fayetteville, Ga., Rick Eckert of York, Pa., and Josh Richards of Shinnston, W.Va., who started 20th in the A-Main thanks to a provisional he earned for recording the second-fastest lap in Friday’s time trials.

Fast qualifier Austin Dillon of Welcome, N.C., was fastest in Friday’s qualifying session with a lap 15.390 seconds. The grandson of NASCAR team owner Richard Childress opted to start at the rear of the first heat and rely on his fast-time provisional to reach the feature. He moved forward from the 19th starting spot to finish 13th in his first-ever World 100 start.