Lanigan gets Tri-City's number for victory No. 7 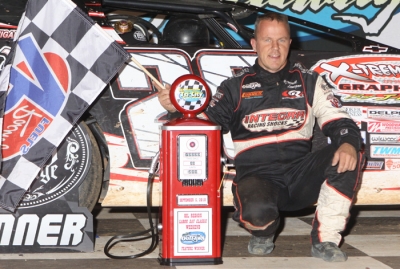 Lanigan, 40, roared off the outside pole to assume command at the initial green flag and never looked back in his GottaRace.com Rocket Chassis. He controlled the entire distance, keeping Clint Smith of Senoia, Ga., at bay en route to his seventh win of the season on the national tour and his long-awaited first-ever at Tri-City.

Smith, 45, settled for second place, steering his Rocket mount under the checkered flag 1.547 seconds behind Lanigan. Josh Richards of Shinnston, W.Va., finished third in his Seubert Calf Ranches Rocket to maintain his WoO points lead by a scant two points over Lanigan, Shane Clanton of Fayetteville, Ga., placed fourth in the RSD Enterprises Rocket and polesitter Jeremy Miller of Gettysburg, Pa., was fifth in his own MasterSbilt car.

“We’ve been good here and we’ve been close, but we’ve just had a lot of bad luck,” said Lanigan, whose bouts with misfortune at Tri-City include a last-lap tangle with a lapped car while leading in 2006 and a time-trial problem that prompted him to angrily pull out of the 2007 Classic finale without racing. “Tonight we had an awesome car and got ‘er done.”

Lanigan allowed himself no flashbacks to his especially heartbreaking loss in 2006 — even as he dealt with slower cars with the white flag flying.

“I was kinda concentrating out there,” said Lanigan, who earned $10,600 for his 19th career triumph on the series. “I thought I felt Clint closer than he was, so I was just worrying about making my best lap at the end. I didn’t have any time to think about what happened in the past here.”

Smith never did, in fact, draw close enough to seriously challenge Lanigan. He stayed within sight of the leader and even cut the gap late in the race, but the veteran needed a bit more speed from his machine to end his long absence from victory lane.

“I made just one slight chassis adjustment wrong and it made me too tight across the middle (of the corners),” said Smith, whose winless streak on the WoO reached 110 races since his last score, on June 17, 2008, at Port Royal (Pa.) Speedway. “That’s where I was getting beat.

“At the end the track slicked up enough where I could charge in the corners and I came back to (Lanigan), but then those lapped cars came into play. I couldn’t get by them fast enough to make a run at him.”

The $5,500 outing didn’t disappoint Smith, however. It was his second runner-up finish in the last four WoO events, pointing to an upswing in his program.

“We’re tickled to death with the way we’re running,” said Smith, who has three bridesmaid finishes this season. “We’re going in the right direction. We just have to keep at it.”

The 22-year-old Richards, meanwhile, escaped an early tangle and pulled off a dramatic final-lap pass to keep himself atop the WoO points standings. He entered the weekend with an eight-point advantage over Lanigan after winning his first-ever 100-lapper Sept. 1 at Mohawk International Raceway in Akwesasne, N.Y.

Richards, who started eighth, nearly was swept up in a chain-reaction pileup on lap two that occurred after Ron Davies of Warren, Pa., and Robbie Blair of Titusville, Pa., tangled and spun between turns three and four while battling for fourth place. The defending WoO champion managed to slither away from the accident scene and restarted in fourth place.

It appeared that Richards was headed toward a fourth-place finish that would have left him tied for the points lead with Lanigan, but he slid around the outside of Clanton rounding turns three and four on the last lap to steal the show position.

“There was a lapped car there and Clanton was on the bottom behind it (on the last circuit),” said Richards, who is once again tied for the 2010 WoO win lead with Lanigan. “I decided to just banzai it in there on the outside and see if it would stick. It did, and I was able to roll around Clanton and beat him back to the flagstand.

“I’m just happy to get all I could get. Maybe I should have gone up there and tried that outside earlier.”

The lap-two incident that dive-bombed the efforts of Davies and Blair — both pitted after the accident and later dropped out — also brought an early end to the nights of Watertown, N.Y., drivers Tim Fuller and Tim McCreadie. Fuller, who slammed the right side of his car into the tractor tire in front of the turn-three wall, retired on lap nine while McCreadie, who couldn’t avoid Davies and Blair, was lapped on the 19th circuit and pulled out on lap 24 after blowing a right-front tire due to the mangled front bumper on his car.

McCreadie’s 22nd-place finish dealt a crushing blow to his WoO championship hopes. He remained third in the points standings but fell 86 points behind Richards with just four events left on the 2010 schedule.

Nick Dickson of Lewistown, Pa., finished sixth, earning a $500 bonus as the highest-finishing driver who hasn’t won a WoO event and wasn’t ranked among the top 12 in the points standings. Steve Francis of Ashland, Ky., advanced from the 16th starting spot to place seventh; Rick Eckert of York, Pa., quietly moved up from the 12th starting position to finish eighth; 14th-starter Gregg Satterlee of Rochester Mills, Pa., was ninth; and 17th-starting Jason Covert of York Haven, Pa., rounded out the top 10.

The WoO will be idle until traveling to the Midwest for the Pepsi Nationals on Sept. 18 at I-55 Raceway in Pevely, Mo.