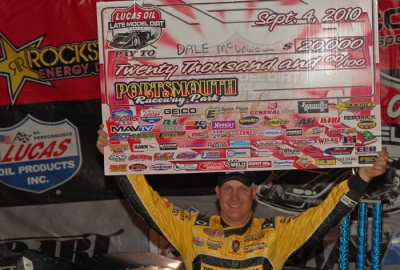 McDowell, who started outside the front row and led laps 11-41 before Wells took command, steered to victory over the final seven laps at the 3/8-mile oval on the Ohio River.

"It was a tough break for Wells and we were just in the right place at the right time," said the 44-year-old McDowell, who earned his second series victory of the season and second in three starts.

The 21-year-old Wells of Hazard, Ky., who led laps 42-68 before something went wrong underneath his No. 18, fell short of his first series victory and settled for 15th.

"I was hoping we could hold together and get a victory," Wells said, "but bad luck got us again."

Brad Neat of Dunnville, Ky., rallied from 12th for the runner-up slot on a rough racing surface while Eddie Carrier Jr. of Salt Rock, W.Va., advanced 15 spots to finish third. R.J. Conley of Wheelersburg, Ohio, and Chris Wall of Springfield, La., also came from outside the top 10 to round out the top five finishers in front of a big crowd at PRP.

Polesitter Tyler Reddick, the 14-year-old from Corning, Calif., led the first 10 laps before McDowell took command. McDowell pulled away from the field while consolation race winner Josh McGuire of Grayson, Ky., stormed through the field, advancing from his 17th starting spot into the second position after 19 laps.

McGuire challenged McDowell into the race's middle stages, but when he got too low and clipped infield tire barriers, McGuire got out of shape in turn two on the 36th lap and fell from contention.

Wells came alive on the restart, taking second from Neat and closing in on the leader. After Wells took charge on lap 42, he broke away from McDowell despite a broken shock mount on his car. He had a substantial lead by the 60th lap, but McDowell and Neat began catching him. When Wells blew a right-rear tire on the 68th lap, his hopes were dashed and McDowell inherited the lead.

McDowell kept Neat and Carrier in check over the final seven laps and raced to his fifth career series victory.