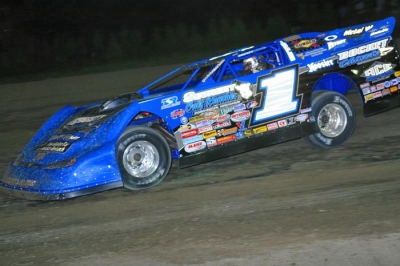 The triumph was important to the 22-year-old sensation for many reasons. It broke him out of a summer slump, brought him a personal-high feature-win payoff of $20,775, pushed him back into the WoO points lead and, most notably, gave him his long-awaited first 100-lap checkered flag as a Dirt Late Model driver. | Video | Slideshow | Prelims

“It feels great to finally win one of these 100-lappers,” said Richards, who earned his series-leading seventh victory of the 2010 season. “This isn’t a crown-jewel event, but it’s a 100-lapper and that’s all that matters. We finally got one under our belt after seven years of trying and hopefully we can win some more now.”

Richards authored a memorable march to his milestone extra-distance score, recovering from a slow start to steer his Mark Richards Racing Enterprises-Seubert Calf Ranches Rocket Chassis forward from the 10th starting position to pass 2006 tour champion Tim McCreadie of Watertown, N.Y., for the lead on lap 79. The defending WoO titlist dominated the rest of the way, crossing the finish line 3.314 seconds ahead of McCreadie’s Sweeteners Plus Racing Rocket.

WoO rookie Austin Hubbard, 18, of Seaford, Del., settled for third place in Dale Beitler’s Rocket after running as high as second and briefly challenging McCreadie for the lead. Rick Eckert of York, Pa., improved one position from his fifth starting spot to place fourth in his Bloomquist Race Car, and fifth place was claimed by 2008 series champ Darrell Lanigan of Union, Ky., who entered the event leading the points standings by two markers over Richards but ended it trailing his young rival by eight points.

Richards admitted after the race, which was postponed by rain on its original Aug. 21 date, that he had his doubts about reaching victory lane and regaining the points lead.

“The last time we were here I felt terrible,” said Richards, who timed 19th-fastest and finished fourth in a heat race. “When we went out tonight for hot laps I was way too tight, and in the second session I felt absolutely terrible. Then, with the way I felt early (in the 100), I figured we’d finish 10th or 15th because I wasn’t really going anywhere.

“But our car really came to us. Mid-race to late-race, it was just like a switch flipped. I could really catch the brown (moisture) off (turn) two and keep my speed up, and all of a sudden we started coming on.”

Richards surged into contention on a lap-40 restart, vaulting from sixth to third in the span of one circuit around the four-tenths-mile oval. He passed Chub Frank of Bear Lake, Pa., who started from the pole position and led laps 1-26, for second on lap 45 and quickly ran down leader McCreadie, but before he could make a bid a caution flag flew on lap 60 and he lost the runner-up spot to Hubbard on the restart.

Richards moved back into second on lap 70 with a homestretch pass of Hubbard, whose car had become hampered by damage it sustained two laps earlier in a turn-four scrape with McCreadie. McCreadie’s 10-length edge disappeared and Richards sailed into the lead for good with an inside move on lap 79.

Once in command Richards experienced little trouble. He easily handled a lap-90 restart that followed the race’s seventh and final caution flag to reach the finish line without a challenge.

“We just had a phenomenal car for the feature,” said Richards, whose 27th career WoO victory moved him within one score of Ashland, Ky.’s Steve Francis for the top spot on the tour’s win list since 2004. “I knew the race was a hundred laps so I just tried to stay smooth and stay straight – and actually, as fast as the track was, that was probably the smoothest and straightest I’ve run 100 laps.”

McCreadie, 36, was no match for Richards. He led laps 27-78 but had to be content with his fifth runner-up finish of the 2010 tour, keeping him third in the points standings, 48 points behind Richards.

“Maybe we went a little too hard on the left-rear tire,” said McCreadie, whose last start at Mohawk was in a 358 modified event more than a decade ago. “Josh was several steps softer than I was, and I’d say he was better everywhere (on the track). He drove by us.

“It was an awesome track,” he added, hailing the speedway’s preparation. “You couldn’t hold the fastest car back tonight, that’s for sure.”

Hubbard, meanwhile, was satisfied with a third-place finish, but he felt he lost an opportunity for his first-ever 100-lap victory due to the lap-68 contact with McCreadie. They came together exiting turn four when Hubbard tried an inside move that intersected with the groove that McCreadie was running off the corner.

“Me and McCreadie were just running two different lines,” said Hubbard, who started eighth. “He would peel down later than I would and we just hit off of (turn) four. It knocked my right-front tow out and I was just kinda holding on from there.

“I definitely thought we had a shot at winning it. We ran (McCreadie) down, so I don’t see why we couldn’t have passed him. It’s just the situation that happened that ruined our chances.”

WoO regulars Francis and Tim Fuller of Watertown, N.Y., were among the drivers who ran into trouble during the 100.

Francis spun between turns one and two on a lap-27 restart — after apparent contact with Richards — and swept up Shane Clanton of Fayetteville, Ga., and Clint Smith of Senoia, Ga., who slid off the track in turn two to bring out a caution flag. Francis, who was running sixth at the time, pitted to repair some bodywork damage and returned on the lead lap.

Fuller suffered an even tougher fate, spinning out of third place on a lap-40 restart after contact from Hubbard amid a scramble between turns one and two. Fuller restarted at the rear of the field and charged forward to salvage a sixth-place finish with a car he felt was capable of winning the 100.

Frank slipped to seventh at the finish. Big-block and 358 modified star Dale Planck of Homer, N.Y., who made his third Dirt Late Model start in a week as a teammate to Boom Briggs of Bear Lake, Pa., finished eighth after passing Vic Coffey of Caledonia, N.Y., on the final lap to collect the $500 bonus for being the highest-finishing driver who hasn’t won a series event and isn’t ranked among the top 12 in the points standings. Coffey settled for ninth and Francis rounded out the top 10.

The WoO heads to Tri-City Speedway in Franklin, Pa., for a doubleheader Saturday and Sunday, the sixth annual Oil Region Labor Day Classic presented by Armstrong Cable. A 50-lapper paying $10,000 to win will top each evening’s program.