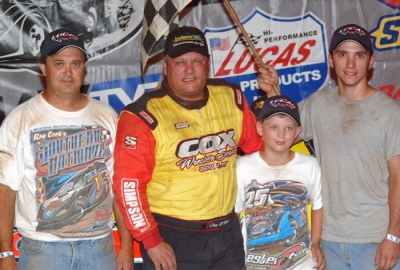 BARDSTOWN, Ky. (Aug. 28) — Don O'Neal has raced his way to the front of races throughout the last month with nothing to show for it in the trophy department. The 46-year-old racer put an end to that Saturday night at Bluegrass Speedway by capturing the 10th annual Bluegrass Classic as he led all 50 laps for his second Lucas Oil Late Model Dirt Series victory of the season. | Slideshow

"I don't know how many laps we've led the last month without winning a race, but it's been a bunch. It feels good to finally win one," said O'Neal, who captured his first series victory since February. "I'm glad it wasn't 100 laps, because they've been bad luck, too. Anyway we got the job done."

The polesitting O'Neal earned $10,000 for his second series victory of the season and 14th of his career as he fought off occasional challenges from Mike Marlar of Winfield, Tenn.

Marlar made his most serious stab at O'Neal by diving low in turns one and two with less than three laps remaining, but the charge fell short from the third-starting driver. Brian Birkhofer of Muscatine, Iowa, advanced from 11th to third but never challenged the leaders while outside front-row starter and series points leader Scott Bloomquist of Mooresburg, Tenn., settled for fourth. Brady Smith of Solon Springs, Wis., rounded out the top five at the half-mile oval.

Jimmy Owens of Newport, Tenn., started fifth and held that spot when a flat right-rear tire forced him to the pits on lap 10, and 13th-starting Tim Isenberg of Marshfield, Wis., rallied to third early before fading from contention.

O'Neal got the jump on Bloomquist at the outset and was cruising by the time Marlar took the second spot on lap six. The first caution on lap 10 for Scott James erased O'Neal's straightaway advantage, but O'Neal stayed comfortably ahead through most of the middle portions of the race while Marlar survived a lap-31 scrape with the turn-four wall.

Tim Tungate slowed on the 42nd lap for the fifth and final caution, setting up an eight-lap dash to the finish. Marlar stayed with O'Neal and tried to slide under him in turns one and two on the 48th lap, but O'Neal's high-side momentum was enough to keep him in the lead en route to victory.

Other cautions appeared on lap 21 when Eric Wells got sideways exiting turn two; lap 33 when Isenberg and Steve Francis got connected between turns one and two; and lap 37 for a tangle between Dan Schlieper and Jeff Watson that sent Schlieper into the turn-three wall.

Notes: O'Neal's MasterSbilt Race Car is powered by a Roush Yates Engine and sponsored by Independence Lumber and Superior Cleaning. ... O'Neal's last series victory came Feb. 6 at East Bay Raceway Park in Gibsonton, Fla. ... O'Neal missed his own track record by two-tenths of a second in time trials. .... Scott Bloomquist solidified points lead after Jimmy Owens and Earl Pearson Jr. closed the gap in recent events. ... Pearson lost a certain victory in the fourth heat with a flat left-rear tire, but he rallied from 23rd to 10th in the main event after taking a provisional starting spot to earn the PBM-Erson Cams Hard Charger honors. ... Among drivers failing to make the feature: Freddy Smith, Victor Lee, Aaron Hatton and Tyler Reddick. ... The Lucas Oil Series returns to action with the $20,000-to-win Pepsi 75 River Days Rumble on Sept. 3-4 at Portsmouth (Ohio) Raceway Park, before heading to West Virginia Motor Speedway in Mineral Wells on Sept. 5 for the $42,000-to-win Hillbilly 100.