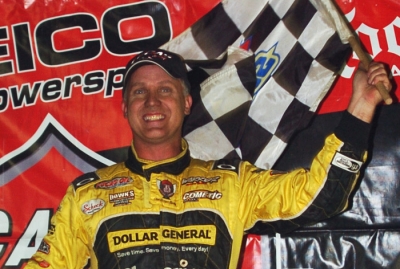 LAWRENCEBURG, Ind. (Aug. 27) — Dale McDowell's first victory of the season came in flag-to-flag fashion Friday at Lawrenceburg Speedway, but there was plenty of drama at the end as the Chickamauga, Ga., driver fought off two challengers for the $10,000 victory.

McDowell turned back late-race charges from Brian Birkhofer of Muscatine, Iowa, and Jimmy Owens of Newport, Tenn., in front of a huge crowd at Lawrenceburg for the 50-lap triumph, his first on the Lucas Oil Late Model Dirt Series in more than 13 months. McDowell swept the night's action by topping 39 drivers in time trials, capturing his heat race and starting on the pole for the main event. | Slideshow | Video

"Man, it feels good to finally make it to victory lane this year," said the 44-year-old McDowell, who drives a car owned by NASCAR standout Clint Bowyer. "(Crew members) Caleb (Baker) and Tommy (Grecco) have worked their tails off this year and they deserve much of the credit for this win."

"I was racing hard there with Jimmy at the end," said Birkhofer, who was disappointed with his performance in the final laps. "I pulled alongside of Dale, but I just couldn't get enough momentum on the bottom to pass him."

McDowell jumped into the lead at the outset with fourth-starting Don O'Neal of Martinsville, Ind., moving quickly to the second spot. They ran one-two the first 33 laps before O'Neal brushed the turn-four wall and lost several positions, moving Birkhofer to the second spot.

With Birkhofer chasing McDowell in the race's late stages, Owens was charging to the front, taking the third spot from Earl Pearson Jr. of Jacksonville, Fla., with 11 laps remaining.

McDowell spent the rest of the race fighting off Birkhofer and Owens, taking the checkers two lengths ahead of Birkhofer at the 3/8-mile oval.

"I thought we had a shot at winning it there for a minute, but it kind of took a little white for our tires to fire off that last go-around (after a lap-31 caution)," Owens said. "It was a good race there at the end between Dale and Birkhofer, and I guess I got to watching or something, I don't know."

Pearson finished fourth while Eric Wells of Hazard, Ky., was fifth and cut Chris Wall's lead in the rookie points to just 10. Tim Isenberg of Marshfield, Wis., started outside the front row but ended up 10th.