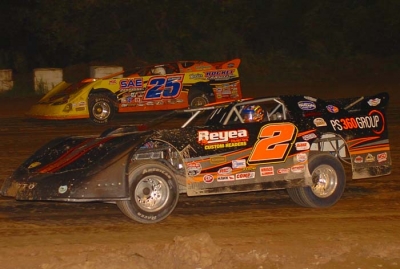 The 44-year-old driver from Seaford, Del., made his long-awaited breakthrough on Tuesday night, ending his dogged pursuit of victory on the national tour with a dramatic win in the second annual Dirt Demon 50 at Brewerton Speedway. | Video | Elliott puts near-misses behind him

Driving the Super Deuce Racing Rocket No. 2, Elliott outdueled WoO stars Rick Eckert of York, Pa., Shane Clanton of Fayetteville, Ga., and Darrell Lanigan of Union, Ky., to join the elite group of racers with an Outlaw triumph on their resume. He secured the lead from Clanton lap 39 and held off Eckert’s late-race bid to bank a payday of $10,575.

“This is absolutely fantastic,” said Elliott, whose list of near-victories in limited WoO appearances over the past six years included a previous personal-best finish of second on July 8, 2005, at Hagerstown (Md.) Speedway. “Any time you win a race it’s great, but this is my first World of Outlaws win so for me it ranks right up there with winning the big-block (modified Super DIRTcar Series event at The Dirt Track at) Charlotte (in 2004). It’s one of the biggest thrills of my racing career.”

Eckert, 44, crossed the finish line a half-second behind Elliott, just a car length ahead of the charging Clanton. The 34-year-old Clanton, who advanced from the seventh starting spot to lead laps 19-36 and lap 38, settled for third place.

Lanigan started from the pole position and led the race’s first 18 laps, but he slipped to fourth at the finish. That was good enough, however, to push him into the WoO points lead by two markers over defending champion Josh Richards of Shinnston, W.Va., who struggled to an 11th-place finish after an incorrect tire-compound choice caused him to tumble backward from the third starting spot and eventually pit for a tire change on lap 34.

The fourth-starting Elliott stayed in the low groove at Brewerton's third-mile, D-shaped oval throughout the race in grabbing the victory, surviving contact with an infield tire barrier with two laps remaining and sneaking past a slower Jill George on the frontstretch at the white flag to get just enough breathing room. Eckert cleared George between turns one and two but spent the remainder of the circuit primarily racing Clanton.

“I was right with him off four on the last lap, but he caught Jill and knocked her out of the way on the front straightway and I got held up there behind her for a second,” said Eckert, who recorded his second runner-up finish during the three-race WoO Northeast swing. “Then I turned in under her (in turn one) and Clanton went around the pair of us on the top, so I had to fend him off for the last lap. It had to be pretty exciting for the fans.”

Clanton made his last-ditch effort with a Rocket car that was less than 100 percent.

“We had a pretty good race car,” said Clanton. “We got the lead and I thought I was OK, but me and (Austin) Hubbard got together (as Clanton lapped Hubbard on lap 31) and it knocked the toe-in out a little bit. I guess it bent a spindle and it quit steering.”

Big-block modified star Billy Decker of Unadilla, N.Y., finished sixth, running just outside the top five for virtually the entire distance. Vic Coffey of Caledonia, N.Y., salvaged a seventh-place finish after starting the night in a hole because a dead battery caused him to miss time trials, while John Lobb of Frewsburg, N.Y., placed a solid eighth. Tim McCreadie of Watertown, N.Y., struggled to a ninth-place finish after drawing a caution flag on lap 11 and then pitting to change a tire and Chub Frank of Bear Lake, Pa., rounded out the top 10.

The most serious of the event’s five caution flags involved Lanigan and Dan Stone of Thompson, Pa., who used a provisional to start 24th but was making an inside-lane bid for fourth place on lap 43 when he tangled with Lanigan in turn three. Stone’s car sustained a broken right-front suspension from the contact with Lanigan, sending Stone straight across the track and causing Tim Fuller of Watertown, N.Y., who had run in the top five for the entire race, to spin to avoid him. Fuller’s night ended moments later when the nose of his car was bent by a hit from Russ King of Bristolville, Ohio, who slid sideways into the pileup.

The WoO will take a short break before returning to upstate New York on Sept. 1 for the postponed 100-lap Battle At Eastern Door event at Mohawk International Raceway in Akwesasne. The tour then heads to Tri-City Speedway in Franklin, Pa., on Sept. 4-5 for a pair of 50-lap, $10,000-to-win Oil Region Labor Day Classic programs.