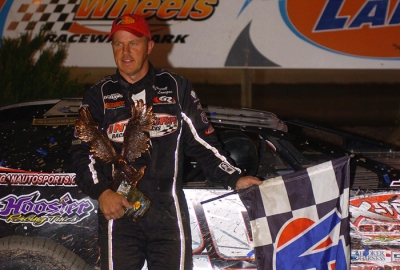 The 40-year-old star from Union, Ky., was simply perfect in the national tour’s first visit to the 5/8-mile oval since 2005, sweeping the evening’s action to run his season win total to a career-high five and pull ever-closer to points leader Josh Richards of Shinnston, W.Va., in the chase for the $100,000 World of Outlaws championship. | Video

Lanigan set fast time, won a heat race and drew the pole position for the main event. Then he drove his GottaRace.com Rocket car to a $10,600 triumph, dominating the headliner after inheriting the lead when Vic Coffey of Caledonia, N.Y., ducked into the pit area during a lap-11 caution period to replace his car’s lost radiator cap.

No one seriously threatened Lanigan once he gained command, even with five of the race’s eight caution flags providing his rivals plenty of restart opportunities. He crossed the finish line 1.3 seconds ahead of York, Pa.’s Rick Eckert, who hustled forward from the ninth starting spot.

Placing fourth was 11th-starting Tim Fuller of Watertown, N.Y., who registered his first top-five finish on the WoO since June 20 at Cornwall (Ontario) Motor Speedway, and eighth-starting Steve Francis of Ashland, Ky., was fifth.

The low-key Lanigan raved about his car and the Rolling Wheels track surface after his victory, which left him just 20 points behind Richards in his quest for a second WoO title. Richards finished eighth after starting 22nd on a trying night that saw him hastily jump into his backup car for time trials after damaging the nose of his primary machine during hot laps and then drop out of his heat because he again bent his mount’s nosepiece.

“The car was awesome when we unloaded it tonight and it was awesome in the feature,” said Lanigan, who recorded his 17th career win on the WoO. “You couldn’t ask for a better car. Vic got me there at the start, but I knew once we got in the front we’d be all right because I could run my line.

“It was an excellent track,” he added. “The track cleaned up for the feature and you could race all over it.”

Lanigan was confident that he had a car capable of overtaking Coffey for the lead if the 2008 WoO Rookie of the Year hadn’t experienced a heartbreaking twist of fate after pacing laps 1-11 off the outside pole.

“We were kind of playing there a little bit (behind Coffey) early in the race,” said Lanigan, who pushed his series-leading 2010 earnings to over $160,000. “I guess I can’t say for sure if I would’ve got him, but I know I moved up to the top (groove) and the car was good there so I think we could’ve passed him if we had to.”

Coffey, 39, wasn’t going to go down without a fight, however. He dearly wanted his first career WoO win to come at a track he’s frequented with his big-block modified.

“I felt really, really good in the line I was running,” said Coffey, who realized his Sweeteners Plus car’s radiator cap had come off when steam began shooting onto his helmet shield during the lap-11 caution period. “A lot could have happened still, but I think we would’ve been OK. I think it would’ve been hard for anybody to pass us.”

Coffey returned after his crew replaced his car’s radiator cap and he rallied to finish 10th.

Eckert, 44, came on strong during the race’s second half, passing Elliott for third on lap 36 and then inheriting the runner-up spot on lap 42 when Shane Clanton of Fayetteville, Ga., slowed with a broken right-rear brake caliper. But he was unable to mount a challenge on Lanigan after restarts on laps 42 and 46.

“To pass everybody I had to be patient around that bottom,” said Eckert. “But probably once I got to second and got a little room I should’ve moved up and tried that line (Lanigan) had.

“With about three (laps) to go, I charged into (turn) one too hard and slid up and made a better corner than I had the whole race. I think I could’ve made up some time on (Lanigan) in one and two if I had done that sooner.”

Elliott felt he had a second-place car if not for his own slip that let Eckert get by. Nevertheless, he was happy with a third-place finish in a car that is actually slated to be driven by former IRL and USAC racer Andy Michener.

“I was using the brakes real hard early when I was trying to get by Clanton for second,” said Elliott, who started seventh. “I didn’t lose ‘em, but I overheated them and got some brake-pad fade. Then I was having to pump them, and when you’re trying to pump the brakes and hit that corner down (in turn one) perfect, it’s tough. I ended up overshooting it a couple times and Rick got me.

“It was driver error. The car would’ve run second if the driver didn’t mess up down there – it was real good, one of the best cars I’ve had in awhile. We kept adjusting and working on it and it came around in the feature.”

Dan Stone of Thompson, Pa., finished sixth, less than a second behind Francis at the checkered flag. Chub Frank of Bear Lake, Pa., who won the 2005 WoO event at Rolling Wheels, moved up from the 12th starting spot to finish seventh after slipping by Richards on lap 43. Tim McCreadie of Watertown, N.Y., started sixth at one of his big-block modified hometracks but settled for a ninth-place finish after pitting on laps nine and 11 to change tires in hopes of improving his car’s performance, and McCreadie’s teammate Coffey rounded out the top 10.

Among the contenders who ran into trouble was big-block modified star Billy Decker of Unadilla, N.Y., who relinquished fourth place on lap 15 when the right-rear tire blew on his Gypsum Express car. He returned after a pit stop but only managed a 12th-place finish.

The WoO continues its Northeast swing with a weekend invasion of Mohawk International Raceway in Akwesasne, N.Y., which hosts the inaugural $20,000-to-win Battle At Eastern Door 100 on Aug. 20-21.