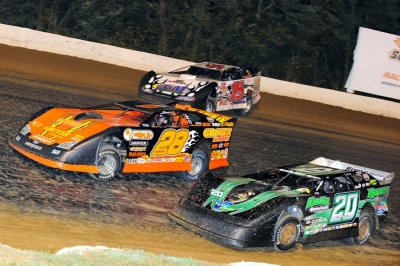 UNION, Ky. (Aug. 14) — Here's a warning for fans planning to visit Florence Speedway for the Sunoco Race Fuels North-South 100: Never, ever head for the parking lot before the checkered flag falls.

The northern Kentucky oval's signature event went down to the last lap for the second year in a row Saturday night as Jimmy Owens dug deep in the closing laps to regain the lead from Earl Pearson Jr. and collect the whopping $50,000 payday. | Complete North-South 100 coverage

Taking the lead heading for the white flag — just as winner Jimmy Mars did in last year's race — Owens raced to his second North-South victory and his series-leading eighth triumph of the season on the Lucas Oil Late Model Dirt Series.

Florence Speedway co-promoter Josh King watched in amazement as Owens swept around Pearson on the high side in the race's waning moments, setting off a raucous reception in front of a record-setting crowd at the half-mile track.

"It's going to happen again," King said to himself moments before the winning pass.

"It's unbelievable," Owens said while soaking up one of Dirt Late Model racing's crown jewels.

"I thought we had it in the bag," said Pearson, who overtook Owens on lap 88.

The Owens-Pearson duel among 38-year-old drivers capped a dramatic race that featured five lead changes among four leaders and kept everyone guess who'd be spraying Champagne in victory lane.

"It's pretty amazing, to win this race once, and to win it twice, with this caliber of drivers, I just never thought I'd be able to do it. I'm glad to be here again," said the fifth-starting Owens, of Newport, Tenn. "It's a big pay drop ($40,000) from first to second in this race, and our team really needed this win. It just feels good and to beat Earl and them guys. It's just a great caliber of racers to race with, and to win, it's just amazing."

The late charge by Owens in the high groove denied Pearson what would've been a winning debut in his Bobby Labonte Motorsports team's new Longhorn Chassis as the low-side groove on the backstretch that carried him into the lead wasn't as fast in the final 10 laps.

"I just kind of married myself to the bottom off of turn two where I passed Owens and (Don) O'Neal," said Pearson, of Jacksonville, Fla. "I thought I had a little bit more lead than what I did, I guess."

The 14th-starting Pearson settled for $10,000 and second place while the fourth-starting O'Neal, who led laps 18-77 but was burdened by right-rear damage on his No. 71, ended up third. Steve Francis of Ashland, Ky., and Ray Cook of Brasstown, N.C., battled much of the race and ended up fourth and fifth on a racing surface moistened by late-afternoon rain that turned a steamy day into a pleasant evening.

A race worthy for the action it offered over the first 75 laps was even better the final 25 as Owens went past O'Neal on lap 78 while Pearson reeled in both frontrunners. Pearson's No. 44 zipped off turn two better than any other competitor and he blew past Owens on the backstretch with 12 laps remaining.

"We were in and out of traffic, and we got kind of trapped in behind a couple of lapped cars and it took us a while to get by 'em, and that's when Earl was able to slip by us on the bottom," Owens said.

"I could kind of go in high in turn one and cut through the middle and leave the (turn-two) corner in the bottom," Pearson said. "The car was really good that way. (Turns) three and four, I could kind of maintain, I guess you could say, and just set it up for turns one and two. Like I said, the car was really good that way, and that's where we passed him. And I thought we had it in the bag — but I guess not."

Indeed, while Pearson initially pulled away as Owens dealt with traffic, building a margin of more than a half-straightaway, the race appeared all but over — and a few fans began heading for the exits.

But with five laps remaining, Owens was still in touch with Pearson, and by the time they crossed the line on lap 98, the margin had diminished to just a few lengths as Pearson ran behind 13th-running Brady Smith.

"I just kind of married myself behind Brady there, didn't want to make a mistake. I didn't think Jimmy — like I said, I didn't think he was that close — but the last couple of laps, they said he moved way up top and found himself something up there, and here he come," Pearson said.

"What we were doing wasn't getting it done," Owens said. "Earl, he could just square off that bottom so good, and that's what he's best at and known for. I just couldn't hang with him off the bottom of the corners there. I was OK in the middle, but I thought 'I'm just going to have to make something happen.'

"I knew I was getting a pretty good run on the high side. And I don't know how fast he was on the bottom, but we were able to come off the corners a lot better. I think what happened is you just get a little comfortable and let your tires seal over a little bit or something, because it seemed like the harder you raced, the better it was going to be."

Owens pulled alongside Pearson going into turn three on the 99th lap, and they were dead even out of turn four with Owens inching ahead to take the white flag first.

"I could say it's my fault (for sticking with the inside lane), but that's where I passed him and took the lead, so it's kind of hard to move away from that line," Pearson said. "When you're second, you can kind of see what's going on and start moving around and make changes. When you're out front, you don't know what to do except hold your line and hope for the best."

Said Owens: When he got by me, it kind of messed my rhythm up a little bit. I thought he was gone there for a little bit, then the same thing happened to him. He got behind a couple of guys racing, and I was able to chase him back down — and I guess return the favor."

Pearson's team narrowly missed an unprecedented opportunity to capture a modern-day crown jewel in the first-ever event for a new chassis. The Longhorn Chassis — named after the Texas racing roots of the Labonte family — had a remarkable debut for Pearson and teammate Brad Neat, but the late-race defeat made it difficult to see the bright side.

"You can't be disappointed," team manager Jason Fitzgerald said, "but I guess at the same time we can."

The race opened with outside front-row starter Eddie Carrier Jr. of Salt Rock, W.Va., getting the jump on polesitter Chris Madden of Gray Court, S.C., who quickly slipped back to fourth and never challenged up front.

O'Neal chased Carrier in the early laps, sliding up and under him to take the lead on lap 18 before Carrier tried to answer the move down the backstretch. The cars briefly got together entering turn three, and O'Neal gathered his machine and drove back under Carrier to take command.

After a lap-21 caution for Bart Hartman, whose car skidded into the mud inside the frontstretch after a scrape with Owens, O'Neal resumed his lead despite racing with a broken right-rear spoiler.

Tim Isenberg's shredded tire slowed the race again on lap 23, but O'Neal pulled away on the restart and held a half-straightaway advantage on Carrier through the race's halfway point, when a lap-48 yellow for debris slowed the race with O'Neal and Carrier behind chased by Francis, Cook and Owens in a tight pack.

Owens made the most of the restart, jetting to third and then moving up to second by the 60th lap while Francis, Carrier and Cook tried to track them down. Pearson was seventh with 40 laps remaining.

Wendell Wallace of Batesville, Ark., stopped in turn two to draw the final caution on lap 63, and Owens stalked O'Neal the next dozen laps before taking over on lap 78 and setting up the late-race dramatics.

Notes: Owens drives a Mike Reece-owned Bloomquist Race Car powered by a Cornett Racing Engine an sponsored by Reece Monument, Gantte Appraisals, Wear Development and Byrd's Radiator. ... Reece watched Owens race for the first time since June. ... Owens dedicated the victory to former Tennessee racer Duayne Hommel, whose driving career ended after he was seriously injured in a 2003 highway accident. Owens presented Hommel with the National Dirt Late Model Hall of Fame Spirit Award earlier in the evening. ... Owens gained a little ground in Lucas Oil points on series points leader and reigning champion Scott Bloomquist of Mooresburg, Tenn., who finished sixth after dueling with last year's winner Jimmy Mars most of the way. ... Thirteen of 26 starters finished on the lead lap and 18 cars were running at the finish.